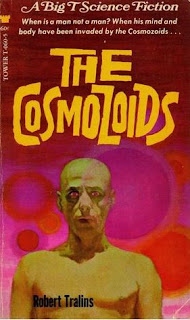 Now folks this is Grade Z sci-fi; not even Grade B sci-fi. It’s also an “in the tradition of” sort of book, Invasion Of The Body Snatchers being the tradition it’s in. Only done as a schlocky low-grade pulp yarn, the literary equivalent of something William Shatner would’ve starred in back in the ‘70s. Which is not a criticism, just a gauge of what to expect if you decide to read it.

Tralins seems to have published at least a few novels, from sci-fi to the ‘60s spy-fy series The Miss From S.I.S. (of which I only have the first volume, but could never read it because it’s one of those “funny” spy satires of the day, a la The Man From O.R.G.Y.). The Cosmozoids was first published in 1966 by Tower, then republished a few years later with a new cover and under the banner “A Big T Science Fiction,” which, at least for me, elicits the image of a guy in a ten-gallon hat sitting behind a typewriter.

Seriously though, that “Big T” tag doesn’t lie; The Cosmozoids runs 140-some pages of big print, so it actually comes off more like a novella, or a short story run amok. There isn’t much story here, other than your basic “Astronaut comes home with psychic powers and finds out there’s an evil alien genius plotting to take over the world” scenario. It’s all written in a very humdrum, half-assed manner (there’s actually a part my friends where the evil alien genius argues with the protagonist over “how many hairs are on the human head”), with completely unexpected periodic bursts of body horror.

It’s sometime in the near future (I assume), and our hero is Major Jim Keith, a karate-fightin’ military astronaut who is the first person “to walk in space, enter a spaceship, and return to Earth on it.” This has made him very famous around the globe, just like Major Tom. However he’s returned to Earth with a secret: he can predict the future. Not a full-on Carnac or anything, he just gets random flashes of future events which happen to pan out. As the novel opens he’s on his way to a funny farm in the Maryland countryside, sent there by his commanding officer, Colonel Jim Phelps. Jim, as Tralins refers to him, has brought along his fiance, a cipher named Dottie.

Jim’s ESP is explained posthaste, as he abruptly cancels their plane reservations; when they get to the clinic, Dottie is horrified to discover that the plane they were supposed to be on has crashed. She confronts Jim, who admits he’s a little psychic now; there’s some implausible “science” about space beams or somesuch giving him these powers. However Dr. Burr, who runs this particular clinic, has had success with helping other astronauts, so there’s hope Jim can figure out what his problem is.

But man it’s so clunky. They’re greeted by a mean old lady, who shows them their rooms (there’s zero sex afoot, nor even any exploitation of the female characters, for crying out loud!!), and Dr. Burr is introduced into the narrative with zero fanfare. Which is odd, given that Burr turns out to be the villain of the piece. His procedure is to basically speak to everyone in condescending tones, make eyes at Dottie, and keep Jim nice and drugged up, the drugs courtesy Burr’s nurse, hotstuff blonde Nanette.

Nanette makes for the only other character in the novel, save for a brief appearance by Colonel Phelps; Jim catches sight of his commanding officer sneaking around the clinic one night and watches as he’s attacked by two big guys who emerge from the bushes. Jim helps Phelps kick their asses, then is informed by Phelps that something fishy is going on around here – not, uh, that Burr himself is under suspicion! No, it’s just that those damn Commies might be up to something here, perhaps brainwashing people, so Jim’s to go back into the clinic and see if he spots anything out of the ordinary.

From here it gets even more goofy. Dottie’s suddenly become a drugged-out automaton, and Colonel Phelps makes a surprise return appearance, also clearly under mind control. At this point Dr. Burr reveals himself to Jim as an alien, one who came to Earth a year or so ago via a maser beam the real Dr. Burr was shooting out into space for some research project or something. The alien, who claims to be a “Cosmopath,” says that when Jim “crossed the interstellar dateline of time” during his spacewalk his mind was opened to the cosmic rays, granting him temporary psychic powers – powers which allow Jim to defend himself against Burr’s mental control. He’s also been granted with the ability to speak telepathically with Burr.

Burr’s goal of course is world domination, but the only problem is suckering people into his clinic so he can subdue them and then implant the mind control devices in them. Here ensues the argument over hair, folks, and I kid you not it really happens – one idea that’s discussed is Burr proclaiming he’s cured baldness, so that people from all over the globe will flock to his clinics. However Burr doesn’t know how many hairs are on the average human head, eliciting an argument between him and Jim. Weird, wild stuff, as Johnny Carson would say, or at least as I seem to remember him saying. And that’s two Carson references I’ve made in this review.

Anyway, plunging on, it’s of course up to Jim to stop Burr. Here’s where the unexpected horror element comes in. Burr reveals that he has “Cosmozoids” at his disposal, hulking brutes who come up out of the sewers and whatnot – the very same hulking brutes Jim and Phelps fought early in the book. But there are many of them, and Jim discovers by accident that despite their size and strength they are defenseless against noise, particularly metal banging on metal. And when you make a metallic din, the “husks” of the Cosmozoids will fall to the ground…and “globs of living gelatin” seep out of their noses and mouths and puddle on the floor. These gelatinous masses are the true form of the Cosmozoids, so we get some Blob ripoffage in addition to the Invasion Of The Body Snatchers lifting.

At this point the novel really harkens back to the vibe of ‘50s sci-fi B movie flicks, with Jim using this “secret weapon” against the Cosmozoids. There are many scenes of him banging this or that metallic object and the creatures quivering and quaking and gushing forth with gelatinous masses from their nostrils and mouths. Along the way Jim manages to free nurse Nanette from Burr’s yoke, as well as Phelps and Dottie. Burr’s latest plot is to take over the nearby military base, so there follows a memorable bit where Phelps broadcasts loud clanging noises to the assembled troops to weed out the Cosmozoids who are posing as humans.

Otherwise the big action is when Burr tries to activate the real Burr’s maser, which is in the bowels of the clinic, ultimately blowing the place up. The novel features a super weird ending where people Jim thought were friends turn out to be Cosmozoids in disguise, but it’s all handled so clumsily that it lacks much impact. Which, come to think of it, is why the introduction of the Cosmozoids’s gelatinous nature does have impact – it’s delivered in the same deadpan, meat-and-potatoes vibe as the rest of the novel, despite the grotesque nature of it all.

Tralins did some other books, among them a sci-fi paperback for Pinnacle, Android Armageddon (1974), and I can only wonder if any of them are as campy as The Cosmozoids. And while it’s good camp, I’ve found it’s much more entertaining to watch a campy movie than read a campy book, especially if said movie is being riffed on MST3K (classic MST3K, that is; the reboot on Netflix has replaced riffing with virtue-signaling and annoys more than it entertains).
Posted by Joe Kenney at 6:30 AM

The Miss From S.I.S. must be better than this.

It's strange that a story with so few characters has two main ones named "Jim." Speaking of MST3K, it sounds like one of those "Night of the Blood Beast" jokes, where they pretended that everyone male in the movie was named "Steve."
But it's even stranger that one is named "Jim Phelps." I've always known MISSION: IMPOSSIBLE in a very sketchy way, but that's all it takes to know that that's the name of the Peter Graves character on the show.

Taking over the world via hair transplants is an idea that the evil aliens would use successfully in the liveliest segment of the anthology horror film John Carpenter’s Body Bags (1993). Middle-aged man Richard Coberts (Stacy Keach) is depressed about his thinning hair until he sees an ad for the Roswell hair restoration clinic operated by Dr. Lock (David Warner) and his sexy nurse (Debbie Harry). The transplanted hairs, while beautiful at first, are aliens which begin to devour his body.