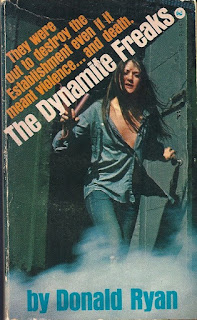 The Destroyer also had quite a few radicals who were rich white kids who were angry at daddy. It was a running theme.

Have you read The Comedy is Finished by Donald Westlake. It is about SLA like group who kidnaps a Bob Hope style conservative comedian. It isn't as "trashy" as most of the books you have here, but it is quite good.

I’m sorry Idint realize that it was BLam that tassaulted police officers,trashed the Capitol , invaded the legislative chambers with plans to do harm to the members. As for dynamite, police found a couple of pipe bombs.

Mostly good review, when you can stick to the book and restrain yourself from... the other stuff. Unfortunately, that's getting rarer and rarer these days, and I've been avoiding having to say anything, but, honestly, old friend to old friend and in the spirit of only-the-people-who-really-care-about-you-will-tell-you-when-your-face-is-dirty, I gotta tell ya: whatever jackass monetized YouTuber or culty televangelism-for-a-political-religion-masquerading-as-a-"news-outlet" you've been consuming WAAAAY-yonder too GDMF'n much-a ain't doing ya any favors. Like, none a'-freakin'-tall. Nobody's here for that, nobody needs it, but it's creeping into almost every review now. Lately I read 'em waiting to wince, and am relieved when I don't have to. I can always use more info on the books, and you're great at that, but I'm good on the other stuff, thanks anyway. If ya can't deprogram for your own sake, then at least get better at tongue-biting for ours. Love ya, dude, but... jeez, make it easier, eh?

Here. Watch this and let me know if I'm being too subtle, because I do un-subtle REALLY fuckin' well lately. Which is why I try to avoid it.

I remember a few years back you got a bit too personal politically, causing some rather unwanted conversation in the comments for whatever book was being reviewed. You acknowledged that and said you'd refrain from doing that again in the future. Probably best to keep it that way. This was pretty rough. This is such a fun blog--please keep it that way!

Thanks for the comments everyone, and apologies that I ruffled some feathers, but keep in mind, the book under review is literally about left-wing domestic terrorists who are financed by a politician who uses them for his own political gain. And I read the book mere months after left-wing protests caused over a billion dollars in damage, as well as around around 25 deaths. And finally I was posting the review on the very day that right-wing protesters were storming DC…but the difference in how these separate “protests” was reported on was glaringly obvious, and I couldn’t help but mention it.

It’s like I’ve been telling my wife for the past twenty friggin’ years: I can’t change who I am. (Not that this has stopped her from trying.) I do try to tone down my stronger opinions – if you all thought this was bad, you should’ve seen the stuff I cut out of the original draft of the review – but I’m still going to write what I personally think at times. I do recall the fluff I caused a few years ago with a similar post, Gesuyarou, but I also recall saying at the time that what I write here is my opinion, and for better or worse that’s what you’re going to get. And also it should be clear at this point that we are well beyond “politics.” As I wrote in this review, today we are closer to a permanent ideological schism, one that promises to blow up at any moment…another thing I couldn’t help but mention in the review.

However my opinion isn’t only directed in one “political” orientation. You all out there are the only people who could appreciate this, so I’d like to share. A couple years ago I reviewed Stand Your Ground, a fairly recent action thriller by the mysterious J.A. Johnstone (who might’ve been Bill Crider, but I’m probably wrong). Something from that book has been running through my head this past week. I seem to recall a minor subplot in it that a former President had refused to leave office and ended up using a poison gas or somesuch in the Oval Office. If I had been reviewing that book last week, you can be damn sure I’d be making a big deal out of the synchronicity.

Anyway, as I mentioned in a response to a commenter on a previous review, I can see which way the wind is blowing and will be taking my regular dose of soma, so I will be toning down any “dissenting” opinions. In fact, with the way things are going, I bet pretty soon you won’t be seeing any dissenting opinions anywhere! But in the meantime, a word of warning: You all might want to gird your loins, as this week I’ll be reviewing another counterculture book from the ‘70s, one that also has parallels to today. I more than likely will be mentioning these parallels, but in a less abrassive way.


I don't mind dissenting opinions (obviously, since I'm still here! :) ), I just get a little worn out with 'em in book reviews if they show up too often. But I'm not trying to tell you what to do with your own blog... I'm just trying to help, believe it or not, 'cuz it's not only me who's gotten a little worn down by this.

Anyhow, I'll consider this a freebie chip in case I ever put up a certain really really long William W. Johnstone Ashes review I wrote but held back on posting 'cuz it is, due to the nature of the book, very political. It's one of the most vicious, hateful things I've ever written... and also the funniest, in a really probably-get-me-sued-by-Johnstone's-surviving-relatives kinda way (provided the moronic pieces of shit haven't yet died from fireworks-related injuries or eating pieces of glass when they saw a pie through a window). But it's not hateful only because of politics -- it's mostly because Johnstone was such an absolute shit writer and lousy human being in general.


As far as ideological schisms, though, just remember, there really relatively small radicalized factions on both sides who happen to make most of the noise and have a warped perspective about how much they matter to the world... as well as what that world's really like. To those of us who follow those fights and partake a lot of alarmist rhetoric on our respective sides -- as you very obviously do, and I'll admit I do my share, too, and we're both poisoning ourselves with that shit if we can face the real truth about it -- it seems a whole lot bigger than it is. But at least 85% of the public really couldn't give a damn. Whoever starts a "civil war" is gonna get squashed quickly by all the people who just wanna be left alone. Outside our little bubble things aren't nearly as hot as they seem... and your side and my side both look like idiots for getting so het-up and they're not gonna wanna side with either of us. :)

Oh, the Ashes series...some of the worst writing it has ever been my misfortune to read.

And the thing, Johnson's Westerns aren't half bad. Pulpy, sure, but you don't put them down convinced that the ink and paper used for them would have been better spent on the Fifty Shades series or a politician's bribe masquerading as a book.

I haven't read any of Johnstone's westerns yet. I have heard that he tends to use massive chunks in previous books in the new ones, though, which he really overused in the Westerns. He apparently did that in the Ashes books, also -- the one I read is the second one, but poking around online it's rumored that at least a third of that book is cut-and-pasted from the previous book. Not only was Johnstone a bad writer, he was LAZY! :) But he might be better at westerns because then at least he'd have to leave current (or current-for-1985 or whenever he was writing 'em) politics out of it. I can see how they might at least have some potential.

I also haven't read any of the newer stuff from "his grandson" (or son... I forget what the whole backstory is on that because it's b.s. anyway -- it's a staff-writer-or-writers). Those are supposedly not as incompetent. Hell, they couldn't be! :) I did pick up Black Friday at the Dollar Tree (on Black Friday, oddly enough) so I do have one of the post-mortem-J.A. Johnstone books I can check out at some point, when I'm in a tolerant-for-stupid mood.

I've read a couple of his horror novels and those were awful, but at least funnier than the Ashes book. I got a Night Mask review removed from Amazon 'cuz I was too vicious and made his family cry, apparently. As I recall, that book was nothing but nonstop racism, queer-bashing, and redline levels of woman-hating, with occasional moments where Johnstone remembered that he was supposed to be telling a story... which he'd quickly dispense with so he could get back to his opining about how everybody-who-ain't-him was ruinin' the country. It was woeful bully-playing-victim stuff, but so over the top it could at least be laughed at. And then there's The Nursery, which I know is a favorite on this blog. I didn't like it quite as much as Joe did, but it was good for a laugh, at least. Definitely had a body count, if nothing else! The Ashes book was just a boring trudge. It was weird that it was supposed to even be an "action" novel. Nothing much really happens other than Johnstone worshiping himself by proxy, total Mary Sue job. For a dude who didn't get past the 8th grade, he sure thought he was smart. Lord, was he wrong... :)