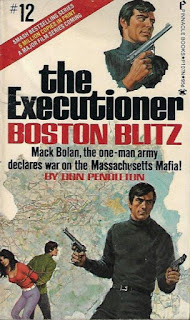 In his interview in A Study Of Action-Adventure Fiction, Don Pendleton stated that Boston Blitz was his personal favorite Executioner novel, and it would appear clear from the outset, given that he dedicates the book to faithful readers of the series. To cue the old cliché, “this time it’s personal” for Mack “The Executioner” Bolan, as the Mafia has kidnapped Bolan’s little brother Johnny and Bolan’s girlfriend Val.

Now I kept asking myself “Val who?,” but of course we are talking about the young lady Bolan became intimate with way back in the first volume. We’ve not heard much about her since – and Bolan’s enjoyed the company of a few other young ladies in the meantime, all of whom I found more interesting as characters – but we’re told that she’s gone into a sort of witness protection program along with Bolan’s “adolescent” brother Johnny. Leo Turrin, Bolan’s informant for both cop stuff and Mafia stuff, beings that he’s a Boston-based undercover cop ingrained into the families, informed our hero at the end of the previous volume that Val and Johnny had been snatched somewhere in Boston.

This installment opens about twelve hours later; Bolan’s arrival in Boston goes down with as much action as most novels finish with. In the first chapter alone he blows away a series of mobsters, leaving one survivor at each stop to spread the word of his arrival in town. Oh and I forgot to mention, but before this we again get that “Uniform Crime Network” faux-bulletin for a prologue which gives Bolan’s background, again reminding us that he’s 30 and a ‘Nam vet. This time Korea’s not mentioned…but then in the second chapter Bolan’s reflecting on how Johnny was just a kid when Bolan went off to the Korean war! Anyway here we get Bolan’s thoughts on Johnny, how he’s the “last Bolan,” and also lots of stuff on how Val is the love of his life and whatnot, which again is comical because she’s hardly been mentioned since that first volume.

Bolan’s gamble is to keep running roughshod over the Boston Mafia until someone comes forward with info on where Johnny and Val are, and whether they’re even still alive. He meets up with Leo Turrin, who provides intel from the ground, and also apologizes for the mysterious slip-up which even allowed the two to be snatched. Turrin believes a couple patsies took the two, as a pair of hoods were just found dead in a car with a marksman medal sitting between their corpses. In other words someone killed the kidnappers and tried to pin the kill on Bolan, however all this happened while the real Bolan was tearing up the San Francisco mob in the previous volume.

There are so many action scenes that the unfortunate effect is too many of them are rendered via summary. This especially holds true toward the end, but here in the opening we’re treated to a nice running sequence in which Bolan hits a mob convoy with a mortar and then mops up the survivors with a submachine gun. Here he takes along one of the few survivors, a Mafia lawyer named Books Figarone. Bolan only allows him to live in exchange for figuring out who took Val and Johnny. It’s a little unintentionally goofy then that Books finds the snatcher with only a single telephone call! It’s a minor hood named Harold “the Skipper” Sicilia, and for some inexplicable reason Pendleton keeps him off-page for the entire novel…and even more inexplicably delivers his comeuppance off-page as well.

Pendleton skillfully weaves the concern over Val and Johnny becoming “turkeys” thanks to those Mafia sadists…turkeys being mutilated torture victims who are only capable of squawking unintelligibly, as our author helpfully reminds us. We readers learn that Val and Johnny haven’t been harmed yet thanks to a brief scene from Valerie’s point of view; per Gene Cohen’s cover she and Johnny are bound back to back, but they’re lying on the floor of some dank holding area. We get some lurid stuff with one of the captors feeling Val up and considering hopping on her for a free ride, only to be reprimanded by the other captor that “the Skipper” has warned against any such stuff.

But the most inexplicable thing about Boston Blitz is we never learn what motivates Skipper Sicilia…Books calls him, finding the kidnapper of Bolan’s loved ones on his first call, and Sicilia grudgingly admits that he did indeed kidnap the two and that he might’ve made a mistake. Presumably Sicilia thought he could bring the Executioner to heel, but at this point Bolan’s mystique has approached Butcher levels of bad-assery, capable of making hardbitten Mafia goons shit their pants in fear. Books is thus able to talk Sicilia into getting rid of the two – not killing them, just letting them go so the Executioner will call off his war of atrocity on the Boston families.

This leads to one of the more memorable scenes in the book, as Bolan and Books make a late night run upstate to where Sicilia keeps his boat, which he claims is near where Val and Johnny are being held. Only here Pendleton delivers on the “turkey” promise with a car driving by long enough to deposit a bundled pacakge. Wrapped inside are the fresh corpses of a woman and an adolescent boy, their heads seared off via blowtorch. Pendleton gets even more lurid with details on how the woman’s breasts and nether regions have also been blowtorched, with a sickened and enraged Bolan further imagining how the sadistic torture-murder was carried out.

Now Bolan becomes a vengeance-driven force of nature, shutting off all emotions and living only to kill in cold blood. But sadly the method of his vengeance-sating is nowhere as satisfactory as that in, say, Bronson: Blind Rage. He chases down the car that deposited the corpses, causing it to crash and catch on fire. He merely shoots the heavyset freak who did the actual turkey-doctoring, then sends off the driver with a mercy shot, Bolan despite his rage still unable to let someone die by burning to death. I was expecting something a little more prolonged and painful. But this is just a precursor to the unsatisfying vengeage-meting Pendleton delivers throughout.

Because folks at this point The Executioner has lost that mean drive that fueled the first couple volumes; it’s become more streamlined, more refined in a way, at least when compared to truly brutal revenge yarns like Bronson: Blind Rage or even the first couple Vigilante novels. I wanted to read a determined Mack Bolan bashing brains and ripping out guts in his unquenchable thirst for revenge, but really there isn’t much here out of step with any other Executioner novel. I guess we’re to understand that Bolan is even more driven than usual, but as the novel progresses his blitzing is so frequent that it’s rendered in summary, diluting the impact. For example, late in the game we learn, in a single paragraph, that Bolan kills fifty-two mobsters in one hit alone.

Anyway Bolan goes on a nighttime massacre mission (the novel occurs over just a day or two), slaughtering sundry mobsters in his hunt for Sicilia. And again, inexplicably, we never get to see him confront Sicilia! Instead, we get this eleventh hour subplot about an “Al 88,” a mysterious figure who is now running the Boston mob, despite being known as an upstanding citizen in his public identity. Yes, the exact same subplot we saw in previous volumes – “Mr. King” last time in California Hit and “Sir Edward” before that in #10: Caribbean Kill. I guess Pendleton was fascinated by the idea of a well-known public figure secretly being a criminal kingpin, because this is the third time in a row he’s given us the storyline.

And what’s worse, the Al 88 stuff takes precedence over the revenge on Sicilia stuff. Even the revelation that those tortured corpses weren’t actually Val and Johnny is muddled; Leo Turrin somehow finds out and informs Bolan, who takes a while to even inquire who the corpses were. (Leo says the woman was a local hooker and the boy was a local “retarded” kid who’d been reported missing…and after this the matter is dropped.) During a break in the blitz Bolan starts to figure out who Al 88 really is, leading to a memorable discussion with the man’s wife in their large, otherwise typical home. Al 88 we’re to understand is so big in his public persona that he’s got connections in Washington, which seems to be laying seeds for future isntallments. But anyway Bolan, again using Books Figarone, decides to set it up so that Al 88 uses his own resources to track down Sicilia, again leading to a climax where Bolan is to meet his enemy on neutral ground for the handoff of his captured loved ones.

And once again it’s a trap, but as ever Bolan’s several steps ahead of his enemy. But what could’ve been a cool finale is also diluted via too quick of a denoument; Bolan takes out some thugs who have been planted in the darkness, then almost perfunctorily destroys the sanitation truck filled with armed thugs that comes after him. I mean this image alone could’ve been greatly expanded upon – the area’s been closed off, it’s the middle of the night, and a friggin’ garbage truck comes roaring out of the darkness with a bunch of machine gun-wielding mobsters riding on it. But Pendleton’s over and done with it in just a paragraph or two, Bolan destroying the truck with a couple grenades. And what really sucks is we learn, as Bolan briefly views the carnage, that Sicilia himself was on the truck – thus he’s been killed virtually off-page, Pendleton denying us the personal confrontation the plot demanded.

But at least Val and Johnny are free, however Pendleton isn’t one to spend too much time on this, either; Bolan and Johnny trade a few terse lines in the epilogue, and then Bolan and Valerie have an emotional conversation that occurs entirely off-page. More print is actually spent on Leo Turrin’s comment that Federal agent Hal Brognola wants to talk to Bolan about something; Brognola’s eventually the guy who set Bolan up with the whole post-Pendleton “Stony Man” scenario of Gold Eagle Books, so I’m assuming we’re going to get a precursor of that, but I guess we’ll find out for sure next time.
Posted by Joe Kenney at 6:30 AM

"Tell them I'm here. Tell them somebody knows why." Best line in the series.

It's been a while since I've read this. I remember that in the previous book, the "reveal" of "Mr. King" was pretty anticlimactic, prompting a sort of "Who? So what? response from me after the buildup of this mysterious mafioso. And Pendleton does rush his endings, frequently by just having Bolan lure the enemy somewhere so he can just blow them up with a rocket launcher. Still, one of the best books in the series.

Note: Bolan is a cold-blooded killer, but he's never a sadist, so letting a mob guy burn painfully to death just isn't in his nature.

Thanks for the comment, John! You are of course correct: Bolan's no sadist. In fact you've pointed out the big difference between Bolan and all the pseudo-Executioners of the '70s (the Sharpshooter, the Marksman, etc): they were sadists. But then they also followed Bolan's strategy, as so many of those books end the same way...Magellan or Johnny Rock lure the enemy somewhere and then hit them with a rocket launcher or grenades. Actually the Marksman yarns are even more simplistic, as sometimes the villains do Magellan the favor of all getting together in some hotel or something, and he just blows them up from afar!