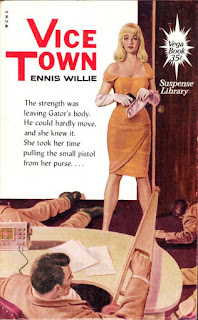 Published while he was writing the Sand series, Vice Town is another slice of hardboiled pulp featuring a bad-ass protagonist courtesy gifted author Ennis Willie. According to an interview Willie did with Stephen Mertz, Vice Town was rejected by his usual publisher (Merit Books) because the protagonist was crippled, so Willie just took the manuscript to Vega Books. The novel is copyright Willie, so I’m not certain why it’s never been reprinted, even in digital format.

I don’t know anything about Vega Books but I’ll assume it was a sleaze purveyor along the lines of Merit. But mind you this is early ‘60s sleaze, meaning we get frequent mentions of “pert breasts” but the actual sex is off-page. In other words pretty much like the Sand novels. And protagonist Gator is along the lines of Sand as well, save for the fact that he’s missing his left leg from below the knee thanks to a wound in “the war.” No fears on him losing any badass points, though; Gator is constantly bashing out brains and teeth with his crutches, which have been reinforced so he can wield them like weapons. They also have additional surprises stored in them.

Gator when we meet him has just returned to Labanion, “the Friendliest Little Town in the South,” to get some bloody revenge. Willie skillfully draws out Gator’s backstory with enough suspense to keep the reader’s interest, but we learn straight away that Gator was actually lynched by the good folks of Labanion, ten years ago. Thanks to a girlfriend named Trudy who slipped him a knife, he was able to cut his noose and escape. Now he’s back, minus one leg but carrying the scars of multiple battles, and he’s come to find out who recently murdered another of his old girlfriends, a beauty named Castine.

But Gator’s backstory is even more colorful, if even borderline surreal: we’re informed that several years ago he just appeared in Labanion one day, a long-haired boy who entered the town via the supposedly-uncrossable swamp that bordered the town. Even stranger, Gator had no memory of who he was or where he came from. A kind-hearted old lady named Mother Bannister took him in – Castine being another orphan she’d taken in to raise as her own – but the people of Labanion never trusted Gator. In fact his name was given by them, mocking how he crossed over Bama Swamp, something only gators could do. Then one day Mother Bannister fell to her death in a well – Gator and Castine were with her but neither of them saw how she fell – and he was blamed for killing her. The townsfolk tried to hang the 19 year-old Gator, and now upon his return he’s openly stared at and receives handwritten threats that he should leave town.

Labanion in the past ten years has turned into a den of iniquity, and it’s all about as Sin City as you can get. Gator comes back to find a sleazy city of strip clubs and gambling joints. He’s returned due to the recent murder of Castine, who he never saw again after his escape, but who he has thought of often over the past ten years. Now he’s read that her corpse was fished out of the swamp, her face gory mush thanks to a point-blank shotgun blast, and he’s returned to Labanion to get some answers and avenge her murder. The question of who murdered Castine and why is the central mystery of Vice Town. The secondary mystery is what happened to the man who turned Labanion into a sleazepit; he too was murdered, the town now run by his second-in-command, a thug named Charlie Docker.

But this isn’t a mystery novel; it’s a violent yarn in the Spillane mold, though unlike Spillane it’s written in a much-preferable third-person. Immediately upon returning to Labanion our hero is wasting perps; he spots some guys trying to rape a young woman outside a bar and he beats one of them unmerciful with his weaponized crutch and strangles the other. The girl is named Alice, and she’s a 21 year-old writer who immediately wants to write a story on Gator – and lose her virginity to him. My suspicion that Vega was a sleaze outfit would seem confirmed by the amount of women with “pert breasts” who throw themselves at Gator; despite his “go away, little girl” admonishments Gator does eventually give Alice some of that off-page good lovin.’

Another of Gator’s conquests is Ursula, a sexy broad his age who is now married to the guy who owns the hotel Gator’s staying in. This subplot clearly exists so that Gator can have more sex action, with Ursula letting herself into Gator’s room whenever she feels the urge and telling him how much she wants him. Ursula also provides intel on the third of Gator’s old flames – in addition to herself and Castine there was Trudy, who was almost a twin of Castine and always by her side. She would certainly know who might’ve killed Castine, but unfortunately Trudy left town a year ago, marrying some sailor.

So Gator goes about “investigating” in a manner Mike Hammer would appreciate; he sidles into establishments owned by Docker and starts busting heads open with his crutches. Gator’s sure Docker had something to do with Castine’s death, and first he’s led to a Docker torpedo named Church. Here we have a brutal fight scene that’s a precursor to the gory splendor of Gannon. But folks Gator’s not too bright, often walking into clear setups. For example, he leaves Church alive after this beating, then that night at dinner Gator receives a call. It’s a woman claiming to be Trudy, asking Gator to meet her at some location on a rougher side of town. Gator runs right over, only to be knocked out and taken on his last ride by Church and a couple other hoods. Otherwise this is a taut sequence, one that features the memorable revelation that one of Gator’s crutches has a springblade housed in its base.

In fact, Gator’s often walking into traps and getting knocked out. In one part he’s even shotgunned, but basically walks it off; this occurs during a confrontation with Docker himself. After holding a gun to the mob boss’s head and warding off his henchmen, Gator confidently walks out of Docker’s establishment – and then is shot right before getting into his car. Luckily Alice happens to have been following Gator and takes him to a safe place in the woods for some nursing and off-page sex. Humorously the shotgun injury doesn’t much seem to bother Gator anymore. He also appears to be unfazed by the multiple concussions he endures.

Gator is such a bad-ass though, doling out memorable bad-ass lines, that this stuff isn’t that big a deal. But for some reason Willie often cuts away to minor characters, like a heroin-addicted whore named Victory Lane. The book’s only 139 pages, with fairly big print, so you’d think these detours would be unecessary. Even stranger is a late development that Mother Bannister willed Gator her newspaper. So now it’s like “Mickey Spillane does Citizen Kane” as Gator uses the town rag to wage a war in print on Charlie Docker, running exposes on how corrput he is, how he probably murdered Castine, etc. I have to say, though, this is the first violent revenge thriller I’ve read where the hero suddenly finds himself becoming a newspaper editor.

Victory Lane plays into another trap Gator willingly walks into; in the paper he offers a reward for anyone who can give him info on Castine’s murder, and Victory calls in on it. But Gator finds her corpse waiting for him, victim of a hot fix. Only she’s been dead a while and it’s a trap. This takes us into the climax, though, with a captured Gator again escorted into Docker’s headquarters, the goal to kill him here in this soundproofed room. Indeed, to have him killed by someone Docker calls on the phone; now it’s just a matter of time until this mysterious assassin arrives. It’s the weaponized crutches to the rescue again, though…but unfortunately here Vice Town derails a bit, tossing aside all the tension and suspense it has been building toward, with the climax played out mostly via expositary dialog. For somehow Gator has realized who the “real” mastermind of Labanion is, the person who killed Mother Bannister, masterminded the corruption of Labanion, and then ultimately turned it all over to Docker.

SPOILER WARNING, so skip to the next paragraph if you don’t want to know…but given the scarcity of the book I figure it’s okay to discuss it. Anyway, Gator has figured out that Castine herself is behind Labanion’s corruption, Mother Bannister’s muder, and the murder of the previous town boss; and further that it was Trudy who was shotgunned in the face, Castine using her virtual “twin” to fake her own death. All this is relayed by a gutshot Gator, who sits dying on Docker’s office chair; Castine has entered the room, of course the mysterious assassin summoned by Docker on the phone. She’s been behind all the failed hits on Gator, and when she finally speaks she reveals she is a treacherous chameleon, able to take on any role to survive. Thus for Gator she was an innocent soul. The cover illustrates this climactic scene, with Gator’s energy failing and Castine slowly taking a gun from her purse. However we’ve been teased that Gator’s other crutch has a weapon he’s never used – and yes, spectacularly, it’s capable of firing a bullet from its base, and thus in pure Spillane mold we have the female villain’s face blown apart in full-on graphic detail. It’s unstated whether Gator himself lives; we leave him sitting on the chair, having bled buckets, and uncertain whether he’s up to the effort of leaving and finding help.

Overall Vice Town runs at a steady clip, filled with violent fights and shootouts. Gator makes for an interesting protagonist; his crutches actually make him more dangerous, and it was fun reading him bashing out brains with the fast-moving sticks. The sleaze element was also nicely handled, with frequent descriptions of the ample charms of the various babes, but nothing outright explicit. The dialog was also great, with many memorable lines from Gator. But then it’s the dialog-heavy ending that kind of left me dissatisfied, with Gator coming to too many conclusions without the reader being aware of them, to the point that the finale almost seemed like Willie hitting his word count and hurriedly wrapping up all loose ends via exposition.

This it seems was it for Gator; Willie continued with the Sand novels for a few years before retiring from the writing business. But as mentioned the book’s copyright him, so it would be cool if he republished it so that a new generation of fans could enjoy it.
Posted by Joe Kenney at 6:30 AM

As a none-to-bright but indestructable badass, Gator does sound like Marv from Sin City.

Great on-the-mark review of a classic I've read several times over the years. Ennis nearly always indulged in too-wordy conclusions before an effective, gory climax but his novels are also always worth reading.

How was there never a Gator movie starring Steve Cochran?