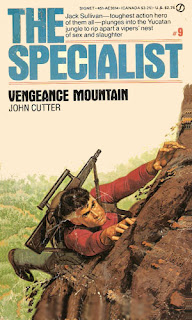 It’s hard to believe, but The Specialist is coming to an end; after this one there’re only two more, and the shame of it is that by this point John Shirley (aka “John Cutter”) has gotten his template down – basically, The Specialist at this point has become a sort of parody of The Executioner, with everything taken well over the top. Vegeance Mountain is very much an indication of this, as it’s basically just a long-running action sequence with some of the darkest comedy you’ll find in men’s adventure. That being said, the series still isn’t as cool as the stuff Shirley was writing at the same time for Traveler.

Another thing that makes it unfortunate that the series is ending soon is that Shirley sets up a subplot that promises big changes for tough-ass hero Jack “The Specialist” Sullivan: namely, he’s considering adopting a young girl and raising her! This character is named Melina and is introduced in one of the grimier opening setpieces yet in the series, reminding readers that, of all the ‘80s men’s adventure series, The Specialist comes closest to capturing the grimy vibe of such books from the ‘70s. Whereas most other series in the ‘80s glossed out the sick-o material one would find in a ‘70s men’s adventure novels, replacing the sleaze and filth with detals about guns, guns, and more guns, John Shirley delivers what comes off sort of like a more polished installment of The Sharpshooter.

Melinda is the man’s latest “star,” kept naked and shackled in this cabin in the woods, forced to “act” in perverted movies in exchange for bare morsels of food. As ever Shirley goes wildly overboard to make his villain loathsome so that the reader can’t wait to see him axed, but this kiddie porn freak really isn’t around enough to make much of an impression. As expected, Jack Sullivan makes short work of the guy’s henchman, delivers the producer a fitting sendoff to hell, and saves little Melinda – Shirley keeping the scene refreshingly free of treacle. Sullivan drops the poor girl off with Bonnie, the hotstuff private eye who first appeared in the previous volume, and asks if Bonnie would consider adopting her – then, after some off-page good lovin,’ Sullivan splits!!

He's soon contacted by another private eye, this one a sleazeball by the name of Preminger. This guy’s been hired by several victims of one of the more depraved and psychotic characters you’ll ever encounter in fiction: Jerome Farady, Jr, who according to Preminger has murdered 180 women(!!) over the past years, each of them in sexually sadistic ways. Farady, a Ted Bundy type (in that he has boy-next-door good looks, and isn’t a slavering wild-eyed freak as one might expect), has escaped prison because his father, Farady Sr, is a multi-millionaire with all kinds of power and influence.

But these victims of Jr’s excesses have banded together; each of them has lost someone due to the sadist, and they’ve heard of the Specialist and knows he’s the guy who can permanently punch Faraday’s ticket. Sullivan briefly meets them – taking the opportunity to check out hotbod brunette Angela Mills, whose mom was chopped to hamburger by Faraday – and promptly takes the job. Sullivan, as ever fueled by the need for vengeance, is almost at comic book levels here, becoming more and more enraged by the stories he’s hearing about Farady, and vowing to kill him but quick. Unfortunately Farady Jr and Sr have both sequestered themselves in an old fortress deep in Mexico, guarded by roving packs of ruthless mercs.

Sullivan heads for Mexico, where the rest of the novel plays out. He picks himself up a CAWS auto-shotgun thing, as memorably featured in the later Cybernarc #4. Shirley pulls a fast one, making us thing the novel’s going to be a long-simmer affair of Sullivan posing as a mercenary hoping to get a job at the “castillo,” as the fortress is constantly referred to. Posing under the in-joke name of Richard Stark, Sullivan beats up a few of the mercs, including fat boss Ludlow and drug-dealing punk K.C., and gets a successful audience with Faraday Sr, who doesn’t trust “Stark” but decides what the hell, he’s hired. Sr by the way is appropriately insane, ranting and raving beneath the framed painting of his forebear. In a bit of series continuity he also reveals he was once a client of the Blue Man, from volume #3. As for Jr, he’s locked away on his own floor of the fortress; no one’s allowed to see him, but Sr occasionally sends local whores in there to be raped and killed.

Shirley really goes for an over the top dark comedy vibe throughout; the mercenaries who guard the fortress are all criminals of the most depraved sort, boasting of how many women they’ve killed. Even “harmless” K.C. brags about wasting a couple people who found out about his dope-smuggling venture. While the reader settles in for the long haul on this – Sullivan dealing with these guys while trying to figure out how to kill Jr – Shirley pulls the rug out with it all happening in the next few pages. Sullivan takes out a monstrous Jamaican merc (who of course is toking on an equally-monstrous joint before the fight) – and gets into Faraday Jr’s chamber. But he misses his chance to kill him and has to escape into the jungle.

From here Vengeance Mountain employs the same template as all the other John Shirley men’s adventure novels I’ve read: it becomes a long chase scene. Sullivan spends more time fighting the corrupt local cops, all of whom are in Faraday’s employ. Shirley doesn’t muddy up the storyline with too many characters; Sullivan befriends a local bar owner who considers gringos his best customers, and the only other character here is the mandatory easy lay Sullivan must have each volume: none other than Angela Mills, who has come to Mexico because she wants to see Faraday Jr dead, and just hiring the services of the Specialist isn’t enough.

Sullivan is more pissed than anything at the girl’s presence, but of course we have the expected sex scene – up to the usual explicit standards we now demand from Mr. Shirley. Angela by the way has “the most incredible body” Sullivan has ever seen; indeed, his “heavy artillery [begins] to throb” when Angela tries to seduce him back at her hotel room. A graphic sequence which has Angela promising Sullivan that he won’t make her climax. If you think Sullivan fails in this, you are hereby sent to the men’s adventure remedial class.

The plot is barebones but what keeps it moving is Sullivan’s near-insane resolve to kill Jr; there are moments where he basically fuels himself with thoughts of getting his hands on the bastard’s throat. But it must be said that Shirley himself finally seems to be running out of fuel. Much, too much, of Vengeance Mountain is padded-out backstory about Sullivan’s days in ‘Nam. Too many times he’ll be looking off into the Mexico jungle and think how it’s so similar to ‘Nam, and from there we go into an extended backstory about a hairy patrol he once endured with his loyal soldiers. This seems to be setting up the plot of the next novel, which promises to see Sullivan leading a new team of soldiers, this time in an excursion into Iran.

The fun as ever comes in the unexpected moments of dark humor. Like when Sullivan discovers a traitor in his midst, one who has come down to sell info to Faraday Sr; when Sullivan gets him, he beats the traitor so badly that his face looks “like a cherry pie that’d been run over by an 18-wheeler.” When the going gets too tough Sullivan sends out for help, and old familiars Merlin and Rolf show up for the climactic assault on Faraday’s castle. Angela takes part, too, getting some field experience with assault weaponry. Shirley doesn’t shirk on the gore, either, so his action scenes are always entertaining, though it must be said that the Specialst doesn’t do near as much gory damage with his CAWS as Rod and Drake did in Cybernarc #4.

For the most part, though, it was the dark comedy I most enjoyed in this Specialist. Otherwise the storyline was a little too simple, and the volume was a bit of a comedown after the more entertaining previous installments. As mentioned though, there was only two more volumes to be, so we’ll see if Shirley gets back to previous standards.
Posted by Joe Kenney at 6:30 AM