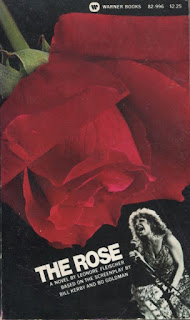 Used to see lots of copies of the soundtrack to the movie when I worked in a record store 20 years ago, but never saw the movie, and didn't realize there was a novelization until now. Thanks for the review!

I remember an acquaintance saying he avoided novels that had stills from the movie inserted in the middle, and I confess having a similar snobbery. Thus, though I've seen The Rose several times (it's one of my favorites), I avoided the novelization. However, based on your review, it actually sounds like it's truly Glorious Trash. From what you outlined, it does follow the movie pretty closely (that bathhouse scene does happen in the movie, BTW), but you are correct that a lot of the backstory was not in the film beyond being inferred in dialog, and there was certainly no explicit "lapping the dew from her petals." A reason I suspect the music wasn't described much was the book was based on a fairly successful film and even more successful soundtrack, so maybe Leonore Fleischer just assumed everyone was already familiar. It's a bad assumption for a writer to make, especially when the soundtrack's biggest hit was the theme song, a piano-backed ballad that was not representative of Rose's bluesy-rock sound, but one I could see being made in 1979. Regardless, I might pick this one up if I survive 2020.

One aspect of your review that amused me, something I've noticed among other reviewers, was on the subject of Bette Midler, which highlights how one generation essentially knows her as a downmarket Barbra Streisand. But 1970s Bette was actually closer to the Rose character, in behavior if not music: raunchy, raucous and campy, so of course she was a gay icon. She was nominated for an Best Actress Oscar for The Rose and it's easy to see why. But her career hit a rough patch in the early '80s, until she started doing movies for the Disney R-rated imprint Touchstone. Beaches/"The Wind Beneath My Wings" may have helped her bank account, but I'm nostalgic for the trashier 1970s Midler.

Thanks for the comments! Cullen, cool to hear you worked in a record store years ago. John, appreciated your thoughts on the film version. (FYI your "if I survive 2020" comment made me laugh out loud!) I definitely recommend this novel, but wanted to note that this Warner paperback does not have stills in it. I looked this up and I see what you mean -- it appears that the British edition of "The Rose" featured stills from the movie. I agree with you, though; inserting shots from the film inside of a novelization kind of makes it all seem like it's catered to the juvenile market.

Last night I found this contemporary review of the film from the New York Times. I was interested to see that the reviewer also noted that the film didn't really look like the '60s: "If anything, the setting seems more like the present than like 1969 — a year, if the movie is to be believed, without psychedelia, hippies, a war, long hair or short dresses. It is also a year without much rock-and-roll, since Miss Midler's singing, however ably it serves the movie's purposes, remains something of a different era." Having read this comment, I can attest again that Fleischer's novel defintely seems more like '69 than '79.

Thanks for reminding me this forgotten Beth Middler flick.

The last paragraph of your review is right on. Mags like Rolling Stone stuffed full of politics are a pale comparison to "music journalism". I find much better any A4-sized music 'zine from the UK to be superior to most U.S. mags these days. And I saw The Rose when it first came out. The similarities to Janis were immediately recognizable. And the great Steve Hunter as her guitarist!