The Hulk: Stalker From The Stars 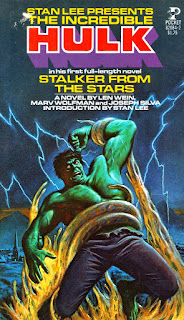 Since it's the late '70s, I'm a little surprised they didn't go in for Jim Wilson instead of Rick Jones. Not that Jim Wilson is some all-out black stereotype in the issues that I know, he's still a hip black kid, so I wonder if they considered him for the book.

They really missed a trick by not calling this one Hulk: On the road to Sh'mballa.

Are you going to read / critique the remaining 10 books in the series ??

Rick Jones wasn’t always a hippie. In the 1960s comics he was a hot-rodding leather-jacketed greaser type. Then by the late 1970s and early 1980s he turned into the hippie cowboy we see here and in the 1982 animated series. I liked him better as a greaser.