The Spy In The Java Sea (Joaquin Hawks #5) 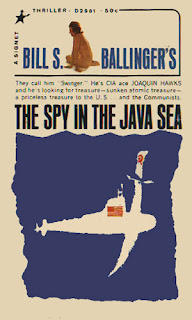 The Spy In The Java Sea, by Bill S. Ballinger
November, 1966  Signet Books

The Joaquin Hawks series comes to a close with this fifth installment, which is a shame as Bill Ballinger turns in an entertaining, fast-moving yarn that’s a big improvement over the somewhat-ponderous earlier volumes. I mean don’t get me wrong, I’ve enjoyed every volume of this series, but truth be told the “exotic travelogue” of some of them got to be a drag. With The Spy In The Java Sea, Ballinger dispenses with that and instead goes for more of a pulpy flair; in other words, exactly what you want from ‘60s spy-pulp.

Interestingly, another ‘60s spy series experienced this sort of “fifth volume renovation:” Mark Hood, the first four installments of which suffered from a sluggish pace before going for more of a fast-moving vibe in the fifth volume. But whereas Mark Hood lasted for several more installments, Joaquin Hawks ended here. It seems clear though that Ballinger envisioned more adventures, or at least left the book open-ended enough for one, so I’d imagine low sales killed the series. In fact Hawks has the chance to settle down with an exotic native woman at novel’s end, but regretfully tells her so long; but then, I seem to recall similar finales in the previous books. Hawks certainly isn’t a “love ‘em and leave ‘em” type, and Ballinger makes it clear that it’s hard for him to leave these exotic women when the assignment’s complete.

Well anyway as mentioned this one moves at a much snappier pace than previous. Hawks is in Djakarta when we meet him, already on his mission; there’s a reference later that he was just returning home from Singapore when he was contacted for this job, which implies that the novel might take place directly after the previous volume. Hawks is here to find the Manta Ray, a nuclear sub that’s hiding somewhere in the Java Sea; as we’ll eventually learn, something when wrong with the radar and the crew needs a new “SMS card” for the computer – or “CPU,” as Ballinger refers to is, making for one of the earliest usages of this term I’ve seen in a pulp novel. Ballinger here develops a subplot, one that’s never actually resolved, that Hawks’s cover is already blown, and he’s just started the job.

The novel features a memorable opening; Hawks is in his hotel room when a German guy comes in and pulls a gun on him. The German is himself a spy and claims to know who Hawks really is, despite his current disguise and cover name; he also mentions Hawks is notorious on the other side for ruining a bunch of Commie plots in the past. The German and the local Indonesian Communist chapter are trying to find the nuclear sub, and the German wants all of the info Hawks has about it. Our hero pretends to be innocent, then finally drops the pretense when he sees the German isn’t buying it. But somehow between volumes Hawks has become a little more gadget-savy, so he manages to get himself out of this situation with a handy explosive lighter. This is a very well-done sequence and nicely sets the tone for the rest of the novel.

Ballinger really brings the pulp spy nature more to the fore this time; Hawks meets with Navy Intelligence who themselves are posing as the crew of a small vessel, where he’s informed that a computer specialist named Housmann has been sent over from England to deliver the SMS card to the missing sub. The belabored setup has it that one crew member left the sub to radio in for help, but the crew member is hiding – and the crew member is the only person who knows where the Manta Ray is berthed. Ballinger brings even more of a spy-pulp vibe to the tale when Hawks goes to collect Housmann – and discovers that it’s a beautiful and well-built blonde. But our author has more up his sleeve, as cagey Hawks figures that there’s something up with “Mrs. Housmann,” and proves her true identity in a memorable sequence which finds the two in a rapidly-sinking boat.

The next action scene has Hawks pretending to be the German spy he killed in the opening of the book, bluffing his way into the lair of some Chinese spies. Here we see more gadgets in play: a suspender and a mechanical pencil which combine into a timed explosive device. Hawks is here to free the real Housmann, who turns out to be a stodgy British man who was quickly captured upon entering Djakarta. But again Ballinger leaves it a little vague how the US intelligence ring has been so quickly outed. Hawks and Housmann even have to go to elaborate lengths to avoid the enemy ship following them when they hitch a ride to Bali; the two get on a small lifeboat and rough it on the open sea for a day or two, eventually landing on a remote isle.

Here, about halfway through, The Spy In The Java Sea begins to more resemble the previous four books. Now it’s totally adventure fiction in an exotic locale, as Hawks must use his strength and cunning to convince the ruling natives that he’s not been sent here as a spy from the Indonesian government, and that he and Housmann need passage to Bali. Of course this entails lots of one-on-one fights between Hawks and the rulers’s various warriors, with Hawks again using his Indian skills to come out the victor. He does take some damage though, thanks to a brutal whipping he endures during one of the combats.

The final third of the novel combines the adventure fiction vibe with the spy-pulp of the opening quarter. The Manta Ray crew member is on an island outside Bali, one ruled by a kindly Raja. Hawks and Housmann have to prove they’re really here to help, and not just some spies sent to uncover the missing sub. Meanwhile Hawks gets friendly with the Raja’s hot daughter, Leyak, who seems to be the perfect woman for him: she’s a mixture of Western culture and old-world attitudes, and she and Hawks have some nicely-handled dialog throughout. But then some “officials” from Indonesia show up, claiming they’re just now here to take the island into official Indonesian protection; Hawks is certain they’re really PKI spooks (aka Indonesia Communist Party) merely posing as government reps.

The climax is tautly-handled suspense, with Hawks soon proven correct: the supposed government reps are really PKI sadists here to torture Hawks and the other two westerners into discovering where the sub is. At least this time we’re given an explanation for how Hawks’s carefully-laid plans have again been spoiled: Kent, the Manta Ray crewman, foolishly used the Raja’s radio to check on Hawks and Housmann and confirm their story. The PKI, monitoring for any radio messages, clearly just put two and two together and realized the nuke sub crewman everyone is searching for is hiding in the Raja’s island.

Actually this one has the best finale in the series. Hawks, his thumbs dislocated from torture, gets hold of an antique bow from the Raja’s museum (the firearms having been confiscated by the PKI), and, armed with arrows made of chicken bone, slips across the darkened palatial grounds and silently takes out PKI guards. It’s pretty brutal, too, as the chicken bone splinters upon impact, causing pretty messy kills. This leads to a tense climax in which Hawks and his comrades, armed only with a few appropriated carbines and pistols, defend themselves in a gazebo from the encroaching PKI troops. But again Ballinger goes for more of a realistic tone, with the heroes prevailing more through Hawks’s painstaking planning and cool-headed reserve.

As mentioned Hawks has a chance for a happily ever after by novel’s end; after some off-page shenanigans with Leyak – who actually drugs Hawks so she can get him in bed! – the beautiful princess has fallen in love with our studly hero, and basically begs him to stay with her on the little island. But Hawks claims his presence will only bring trouble, that it is only a matter of time until the island is ingested into Indonesia, and that he doesn’t want to ruin such a paradise. So off he goes, and we’re told he’s not happy about it, but it’s duty and all; little did he know he’d not be returning! Well anyway maybe we can just pretend that he decided to go back after all, and he and Leyak went on to rule the island together.

Overall I enjoyed the Joaquin Hawks series, with each volume offering a lot of entertainment, but I definitely enjoyed this installment the most. It would’ve been cool to see if Ballinger would’ve retained the more pulpy tone for future volumes, but I guess at this point the spy-pulp market was no longer lucrative and he moved on.
Posted by Joe Kenney at 6:30 AM

I'll keep my eye out for this! I just got one of Ballinger's Gold Medal books, he's long been an author I've wanted to dive more into.