The Revenger #6: A Promise For Death 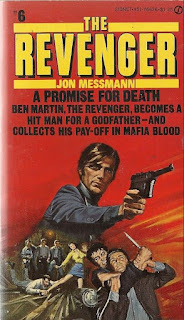 The Revenger #6: A Promise For Death, by Jon Messmann
September, 1975  Signet Books

The Revenger series comes to a close with a sixth volume that caps off the storyline; it seems evident that Messmann knew this would be the series finale, and thus gave it an appropriate send-off. So, I can’t say I’m sorry to see The Revenger go, as Messmann delivers not only a fantastic novel but also a fitting series conclusion, paying off on elements that were introduced back in the first volume. This was by far my favorite installment of the series, with the introspection toned down and the focus more on suspense, action, and character.

It's about eight months after the previous volume, and Ben Martin (or “Ben,” as Messmann always refers to him in the narrative) has made his way back to New York, in yet another attempt to start over again. As usual he’s gotten a working-class life, driving a bakery truck for a Sicilian immigrant. But when we meet Ben he’s back to Revenger mode, Messmann again writing the sequence in present-tense. The fifteen year-old daughter of Ben’s boss was raped by a pair of young Mafia thugs, and in the following taut sequence we see Ben doling out some brutal payback with his customary .38. The action is more pronounced in A Promise For Death than it was in any of the previous volumes, most of which featured Ben sniping targets from afar. Here he’s taking down goons in pitched firefights, and this opening part packs more punch than usual because Ben’s fired up over how the Mafia has again spoiled the innocent.

Eventually Ben learns that Don Aldo Trafficante was behind the girl’s rape; Trafficante now runs the New York mob, having taken over the position vacated by Johnny Lupo in the previous book (after Ben killed Lupo, that is). Trafficante ordered the rape of a poor innocent fifteen year-old because he happens to be a distant relative of the girl – and had a hunch that the hulking new employee with the gray eyes at his cousin’s bakery might actually be Ben Martin, the Revenger. Thus the young girl’s rape was intended to draw Ben out, if indeed it was him, the rapist punks used as veritable Revenger bait. Not that Trafficante wants some revenge of his own; he’s got some problems with two rival dons, a mob war brewing with them, and he wants to retain Ben’s services as his personal executioner. In exchange Trafficante promises to give Ben insider Mafia info which could crush the entire organization.

Trafficante isn’t the only one who suspects Ben’s back in town; Captain Leo Hendricks, first introduced in the fourth volume, has also been keeping his eyes on the papers, and when he reads that some Mafia thugs have recently been gunned down he figures Ben’s back in town. Whereas Ben is against the idea of helping Trafficante, Hendricks pushes him to go for it, as the don could give Ben – and the cops – all sorts of info that would otherwise be inaccessible, and could do more damage to the mob than all of Ben’s previous kills put together. This elicits another nicely-done sequence, where Ben visits Trafficante in his townhome and Trafficante argues that Ben is always so willing to help “his people” but won’t help Trafficante himself, turning Ben’s own logic around on him. But as mentioned, Messmann doesn’t let the philosophy bog down the plot this time; during the argument, a phone call comes in that Bianca, Trafficante’s daughter, has been kidnapped by one of the rival dons.

Ben now of course has the opportunity to do what he does best: save the innocent from the Mafia. Bianca, who you won’t be surprised to know is a smokin’-hot and stacked brunette babe, has nothing to do with her father’s life; her mother died when she was a child and Bianca was sent to Europe to attend various elite schools. Now she’s in her early 20s and back in America, living alone in her own apartment; she claims later to only have recently deduced that her father is Mafia. Ben tells Trafficante he’ll save the girl, leading to another taut and well-executed action sequence, which first has Ben posing as a firefighter to get into the building Bianca’s held in, then scaling down from the roof and breaking into the apartment with .38 blasting.

Bianca is a fully-realized character, probably the best female character in the series – which again is only fitting given that this is the series finale. And by the way, there’s no reference to the other “Bianca” Ben had a relationship with, the one who was last seen in the third volume; it’s possible Messmann himself had forgotten about her. I sure as hell had, until I recently reviewed my incredibly-overwritten reviews of the previous five volumes before writing this review. As with most any other female protagonist in a Messmann novel, Bianca is not only beautiful but capabale of deep thought and probing analyses of people she’s just met, and can also quote odd lines of poetry. Plus she’s great in the sack! Sorry, couldn’t resist. But yes, Ben and Bianca’s relationship develops in the expected direction, but it comes off as natural, not forced – Bianca feels that the two are “connected” now, given that fate has put them together – but whereas earlier volumes were fairly explicit in the sex department, Messman’s now firmly in a Burt Hirschfeld mode, where it’s all relayed via metaphor.

Messmann doesn’t cheat us on the action, though. Ben we’ll recall was a “specialst” in ‘Nam, a “specialist in death,” per the first volume, and this installment really brings that to the fore. With Capt. Hendricks occasionally setting him up with gear, Ben pulls off a series of hits on the mob that would even impress Mack Bolan, from taking on a few cars filled with Mafia assassins in the Westchester mountains to employing one of the bakery trucks in the prevention of another potential assassination of Trafficante in Manhattan. Most of the action deals with Ben wiping out Trafficante’s opposition; per the agreement the two men have made, Trafficante vows to quit the Mafia if Ben will take out the two rival dons who are cornering his territory. Bianca herself is the one who has brokered this agreement, acting as intermediary between Ben and her father; Trafficante claims to love his daughter so much that he’s willing to quit the mob life for her. Of course, Ben doubts this, but Bianca is innocent enough to believe her father.

The action is broken up with sequences that focus on Ben and Bianca’s growing relationship. As with previous female characters in the series she sees right through Ben’s “Revenger” exterior and wants to be with him forever. But there is something about Bianca that sets her apart from previous such women. Again this is no doubt because Messmann knows he’s writing the final volume, but still, I take it we’re to understand what separates Bianca is that she’s a daughter of the very organization Ben has been warring against all this time. What I like is how Messmann doesn’t beat us over the head with the pathos; there are but a few references to Ben’s murdered son, his ex-wife not mentioned at all, but the implication is there that Ben wants to end his war and start over for real this time, making a new life with Bianca. First though he must prove to her that her father is a liar.

The last quarter is more of a suspense thriller, as Ben of course quickly deduces that Trafficante does indeed plan to kill him; we readers already know this, as Messmann this time writes several sequences focusing on other characters instead of just on Ben all the time. Thus we see Trafficante plot Ben’s death with his lieutenant, Joe Morelli. Messmann implies that the chief skill of a “specialist in death” is to always be prepared, thus Ben has staked out Trafficante’s downtown office and knows which buildings the don will put snipers on to take Ben out when he comes to meet Trafficante. This sets off a suspenseful finale in which Ben must chose whether killing Trafficante is worth losing Bianca over. However, fate intervenes in the form of a once-innocent fifteen year-old girl who was raped, at the start of the novel, and has been slowly going insane with a desire for revenge – a masterful play by Messmann, who shows that Ben Martin is not the only person who has ever owed the Mafia some payback.

Ben’s choice is taken from him, but revenge is served regardless. The novel ends with Bianca once again coming to Ben’s apartment and telling him she wants to be with him, for them to start a new life together. The last lines of the novel seem to make it clear that Messmann knew this would be it for The Revenger:

It might just work this time. Those who shared pain were so much more a part of each other than those who shared only joy. And, maybe, happiness was a revenge of its own.

It is a very affecting ending, particularly given that Messmann’s managed to give his hero a Happily Ever After without being too obvious about it. The question is whether Messmann himself chose to end the series at this point, or whether low sales were the culprit. I can’t help but notice that the second through fifth volumes were all published rather quickly, coming out between June of ’74 and February of ’75. But this sixth volume came out seven months after the fifth one, indicating that Messmann might’ve needed more time to write it…or that Signet put it on the backburner. But then, nowhere is it stated on or in the book that this is the final volume, so maybe Messmann just turned this one in and told Signet he was done.

In any event, A Promise For Death is an incredibly entertaining and well-written thriller, notable for being one of the few men’s adventure finales that acts as a legitimate conclusion to the series. I really enjoyed it, and highly recommend it – as well as the series itself.
Posted by Joe Kenney at 6:30 AM