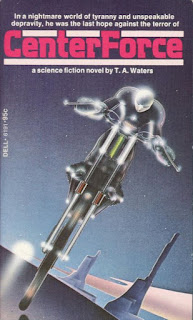 About ten years ago I first reviewed T.A. Waters’s CenterForce, and clearly I didn’t like it very much. But Waters is the guy who wrote The Psychedelic Spy, after all, which I consider one of the best standalone novels I’ve read in the past several years, and definitely one of my favorite books I’ve ever reviewed on here. So I’ve been meaning to go back to CenterForce and give it another shot, especially now that I’ve again become interested in the late ‘60s/early ‘70s counterculture, a milieu which Waters projects into the “near future” for this slim paperback original.

First though a note on the cover; as mentioned in my original review the “Roger Dean-esque” artwork is not representative of the novel. The art, which I like a lot, isn’t credited, but I’m guessing it’s by Peter Lloyd, an artist who was doing similar work at the time for rock albums, like Jefferson Starship’s Dragon Fly (1974) and Starcastle’s Fountains Of Light (1977). An airbrushed pseudo-Silver Surfer seems to have been Lloyd’s schtick, and that’s exactly what graces the cover of CenterForce. But again it has nothing to do with anything in the novel itself; the titular CenterForce patrol does have somewhat high-tech vehicles at its disposal, and we are informed that CenterForce soldiers wear “special helmets,” but none of it is described like what is shown on the cover. And if that’s supposed to be our hero, it’s really wrong, as main protagonist Ben Reed is a long-haired outlaw biker in his thirties who rides a 1971 BMW R60 motorcyle. In other words, something like this: 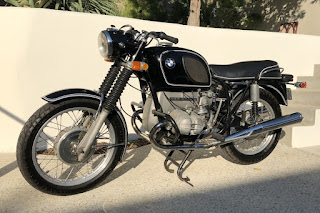 This is another of those obscure novels where you wish some enterprising producer had bought the rights to make a film version. AIP or some other drive-in purveyor could’ve easily made a cool movie out of it. It could’ve been done on the cheap, too, as most of CenterForce plays out in the desert or on hippie communes, and hell a skilled hand like Sutton Roley could’ve found some inventive methods of handling the occasional “science fiction” element on a shoestring budget. I’m not sure why I’m even bringing this up; I guess mostly because CenterForce very much has the vibe of an early ‘70s counterculture film, and I’m not just saying that because some of the chapters are written in screenplay format. It’s got the fractured, post-psychedelic vibe of many films of the era, like Vanishing Point or Peter Fonda’s Idaho Transfer, which had a similar storyline of hippies being hunted in a nightmarish future.

Waters doesn’t get exact with the timeframe, but we learn through various communiques, interrogation excerpts, and other materials that the novel is likely set in the 1980s; it’s post 1976, at least, for we learn that in that year New York City became the capitol of the US. One of the things I didn’t like about CenterForce when I first read it is that Waters refrains from using a standard narrative style, which is unfortunate because the setup has all the makings of a pulp classic. And it’s doubly unfortunate because Waters proved he could write a pulp classic in a standard narrative style – and damn well – in The Psychedelic Spy. But he clearly had grander aspirations for CenterForce; chapters are short and trade off between straight plot material concerning Ben Reed’s trip through the Utah desert and random communiques which are intended to elliptically fill us in on this future world. But all of it, no matter the format, is egregiously artsy, often to the detriment of forward momentum.

Worse yet, Waters’s fragmented narrative style prevents the reader from fully connecting with the characters and the plot developments. Ben Reed’s portions carry the brunt of the narrative, but we’re constantly cutting away from him to some excerpt from a StarChild Commune newsletter, or a report on some action elsewhere in the country, or even letters written by minor characters to their families back home. Also this is confusing because we don’t even learn who has written each of these letters, or where the excerpts are taken from, until the end of each chapter, so this causes reader confusion when you start each non-Ben chapter…you have no idea who is suddenly writing these first-person letters and communiques. It’s jarring and it’s something Waters should’ve realized in the editing stage: the names/origins of the pseudo-dispatchs should’ve been stated at the start of each chapter.

But Waters’s biggest transgression is his failure to exploit his own material. There’s too much telling and too little showing. The opening promises much, though; Been Reed, on his bike in the middle of the desert late at night, has just killed a man with his Remington shotgun. We’re told that bounty hunters can legally hunt and kill hippies and bikers in this unstated future, but incredibly enough Waters does nothing further with this – you’d think the image of a bunch of slackjawed corncobs tearing around in a truck and hooting and hollering as they try to blow away a couple bikers would be too much for a writer to resist. But other than this opening action scene – which indeed begins after the action itself has occurred – we’re only told of these hippie-hunters.

At least we get a little more elaboration on the CenterForce patrols, which venture around the desert in armored buses. Ben gets in a fight with one of these directly after killing the bounty hunter, hiding in a ditch and blowing the thing up by shooting at its gas tank. But this isn’t elabroted much either, with more focus on the high-tech Big Brother methods of the CenterForce. There are prescient parallels to the drone technology of today, with mobile CenterForce command posts helmed by desk jockeys who activate heat-seeking missiles that are housed in an orbiting satellite. The entire midwest of the US has been blasted by various nukes and the like, all as part of the breakout of revolutions and civil strife after the ‘60s movement, and these CenterForce personnel monitor their screens for signs of any “home-soil hostiles,” much like military personnel of today monitoring the deserts of the Middle East on their screens for signs of terrorists.

But Waters doesn’t do much to bring the outlaw counterculture to life, either. We know they do drugs – Ben takes peyote immediately after this opening firefight, tripping as he continues his drive through the desert – and apparently they listen to rock, given the occasional “chapter” that’s composed of overly-wordy rock lyrics. But the lineage of the hippies and counterculture gurus of the ‘60s to this unstated future era is not elaborated on. In short, Waters just fails to bring his world and his characters to life, and it’s a shame because there’s a lot of opportunity for both. Instead he tries to go for more of a smallscale approach by focusing on minor characters and events, like Jill, a young runaway who now lives at the StarChild commune, in Arizona, writing letters to her mom back home. She’s underage, we know, and very small, almost childlike, which makes it pretty strange that Ben falls hard for her, late in the novel.

We readers must do the heavy lifting when it comes to piecing together the storylines; rather than a straight narrative, random things will be mentioned in one section, then referenced in another communique or letter, and lots of “big stuff” happens veritably off-page. Waters causes confusion with similar subplots; there’s young Jill at the commune, who is almost raped by a gang of bikers who show up at StarChild (she’s saved by the late arrival of their leader, Grogan, who kills the would-be rapist – one of those incidents which, unbelievably, occurs off-page), then later another young runaway girl at StarChild is indeed raped (off-page) by another group of bikers, ones who are never identified. This girl is the daughter of the former sheriff of Marble Fork, the small town outside of StarChild, and sets in motion the “climax” of the novel, where the guy tries to shoot down Ben, assuming he is the biker who raped his daughter.

Otherwise we have a minor plot about a senator working out of the “Government Building” in New York who plans an amnesty bill that will repair the country, and is assassinated immediately thereafter (by whom Waters doesn’t state). There’s also a fun piece about a hippie who is captured by CenterForce but so high on LSD that he thinks it’s all a trip. But this too leads to repetition – strange that there’s so much repetition in such a slim book – because later, we have a repeat of this “save a captured hippie” scenario. With the same guy taking part in the rescue! This is Big Tex, one of Ben’s comrades, a lanky dude who drives a Land Rover with a machine gun mounted in the back. When one of their pals is captured, Big Tex and Ben, along with biker boss Grogan, go to the rescue – a scene that could’ve been much more exploited. Waters even skips out on the chase scene, with a chapter ending with the CenterForce patrols coming after them in their armored vehicles!

The bigger story though is that Ben falls in love with Jill at first sight, but it’s hard to buy. He’s come here to StarChild assuming he’ll hook up with Trina, an old flame who is now Grogan’s mama. There’s subtextual evidence that Trina is an undercover Federal agent, or at least working with them. But again, nothing is elaborated upon or properly explained. In fact Ben gets shot by the ex-sheriff, and Waters doesn’t even bother to tell us he’s still alive until a few chapters later…just nonchalantly placing him in the scene with a cast on his arm. Ben and Jill decide to leave for Mexico, and meanwhile Jill’s pregnant; all as revealed, lamely, in another letter Jill writes her mom. And that’s it…other than a vague final chapter about a thermonuclear strike on San Francisco and Atlanta, two of the last counterculture hotspots or somesuch.

As mentioned in my original review, CenterForce is short, coming in at just 175 pages. It’s too short, that’s all – another hundred pages or so and Waters could’ve fully fleshed out his story. But then he might’ve wasted the additional pages on more communiques, rock lyrics, and poetry – I neglected to mention it in this review, but as stated in my original review there’s a lot of bullshit poetry padding the pages, poetry which turns out to have been written by a computer. Just as annoying are the screenplay sequences, randomly spliced in the narrative. If only Waters had stuck to a straight narrative, as he did in The Psychedelic Spy, he might’ve had another pulp masterpiece on his hands. Unfortunately, a la Captain America in Easy Rider, “He blew it.”
Posted by Joe Kenney at 6:30 AM

Wow! Talk about a blast from the past. I haven't seen Lloyd's artwork in years, but I remember it being very prevalent for a time. Very indicative of the times. Thanks.