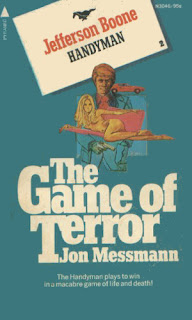 Well, it’s been four years since I read the first volume of Jefferson Boone, Handyman, and really I meant to get to the series sooner, but given that I was also reading The Revenger I guess I just didn’t want to mix my Messmanns, so to speak. Because really both series are written so similarly, Messmann going for this pseudo-Burt Hirschfeld style, with overly-introspective heroes and plots that hinge more on suspense than violent action. What makes Jefferson Boone, Handyman slightly different is the James Bond vibe, with “Jeff” (as Messmann mostly refers to him in the narrative) going around the globe in the capacity of a freelance troubleshooter.

This one’s a little more action-centric than the first one, but not by much. This is mostly due to the threat Boone faces: a consortium of terrorists who have come up with the novel idea of blackmailing the people they’re about to attack. “Terror for profit,” as Jeff thinks of it. Again we get a sad reminder of how terrorism wasn’t so commonplace at one time; early in the book, when hired by a trio of British, German, and Israeli intelligence directors, Jeff sits through a lecture – complete with slideshow! – going over the history of the terrorism movement, with a focus on the then-recent Munich Olympics disaster. Obviously this long-running sequence is here to fill pages and meet the word count, yet at the same time Messmann’s cleary trying to inform his readers on who terrorists are and how they operate.

Before that though we get a taste of the sub-Hirschfeld vibe Messmann employs for this series; Jeff is at a lush spa in Austria, summoned there by a mysterious telegram. He has been getting friendly with a hot American tourist named Judy, but there’s been no hanky panky yet. All of it is written like a trash fiction paperback of the day. Finally we get the blood and guts we’ve been waiting for when a visiting orchestra turns out to be a bunch of terrorists in disguise, gunning down innocent spa-goers. Jeff gives chase in his red Mustang – which he transports around the globe with him on cases, so the thing must have a helluva lot of miles on it – leading to a nicely-done action scene of him blowing away the two terrorists with his .357. After which we get a reminder of why I called Jefferson Boone “Frasier Crane meets James Bond” in my review of the first volume, as Jeff rumintes, immediately after blowing away the two thugs:

Senseless things were only senseless to those restricted by the normal, conventional framework of thought. It was one of modern man’s problems, the language of ideas and the language of words, too often an uneasy fit. Words, he grunted, willing accomplices to the deceits of the mind, more often than not protecting the rigidities of our own concepts and definitions.

I mean you ponder thoughts like this over a snifter of brandy, not when you’re driving away from a violent gunfight in your red Mustang. It gets even more goofy, as Judy pouts that Jeff abandoned her, basically calling him out as a coward. Once she overhears the management discuss “the crazy American who chased the terrorists,” her thoughts have changed – and into Jeff’s bed she hops for some long-delayed sex. But like last time Messmann continues with the Hirschfeld vibe even into the sex scenes, relaying it all via metaphor and turns of phrase, save for errant mentions of “the warm wetness of her” and the like. Oh and humorously, the ladies here all fall hard for Jeff’s custom-made “Handyman” business cards, immediately figuring it has something to do with international espionage. Not a single one of them think that it means he’s an actual, you know, handyman.

The men who summoned Jeff to the spa finally arrive, apologizing for the slipup on dates – they wanted to prevent the terrorist hit at the spa, which they’d gotten intel on, but it happened sooner than they could arrive. These are the three intelligence directors mentioned above, who treat Jeff to the slideshow while they relate the latest terrorism menace. They believe it’s affiliated with Black September, but Jeff will gradually learn that the terrorists are from all over the globe, running into Japanese ones, Irish ones, and your standard-model Arabic ones. Jeff doesn’t want the job, as he doesn’t “do” terrorism, so to speak, finding it too big a job for one man. But he keeps flashing on that attack at the spa, the innocents killed, and he changes his mind – and by the way there are lots of condemnations of terrorists in the book, but Jeff’s admonishments of them as “dirty bastards” and the like just doesn’t have much bite.

There are parallels to the Stark series this time, what with Jeff shuttling around Europe in his Mustang. The guy puts some serious mileage on the car. He acts in the capacity of a freelance terrorism-stopper, or such; the only lead the directors have is that a travel company owner named Jim Costa, an expat American on the French coast, might be a target of the terrorists, given that he ignored one of their threats. So Jeff drives on over and we get another Hirschfeld bit where he comes across a beautiful brunette trying to save her boat from being smashed at the docks during a fierce thunderstorm. They have a quiet moment in the nearby cabin and bat eyes at each other, and next day Jeff discovers that the babe is the daughter of Jim Costa. Her name is Angelique, and Messmann skillfully brings her to life, but he’s guilty of that hoary old cliché; she could be The One who captures Jefferson Boone’s heart after all these years of unshackled cocksmanship.

Speaking of which, the expected sex scene is slightly more risque, but again on the “intellectual” tip, with mentions of “curled flocces” and the like; I admit, that one sent me to the dictonary. Meanwhile Jeff just sort of walks around Costa’s premises to make sure no terrorists are attacking him. He also finds the time to have friendly philosophical arguments on the nature of terrorists with Costa’s Egyptian second in command, Aran. You’d think that an Egyptian guy arguing over the viewpoints of terrorism might set off alarm bells for Jeff, but nope. Instead we get more ruminations like:

The idea [of organized terrorism] assumed too much. It assumed the simultaneous existence of a single idea on the part of essentially diverse groups, the existence of a concept, a sick, perverted, horrifying concept but a concept nonetheless and he didn’t see these [terrorists] as conceptual thinkers. It couldn’t be entirely discounted but it didn’t fit, either…

Good grief, just kill someone already! We do eventually get a nicely-rendered sequence where Jeff’s called to another part of the French coast where a potential attack might happen. He oversees security of the beachside party, unable to find any weak spots…realizing too late he’s completely overlooked the friggin’ ocean. And like a second after his realization a retrofitted PT boat comes along and starts shooting at the partiers. Jeff again gives chase in his Mustang, following along the hilly roads with his lights off, and gets the terrorists when they’ve stopped to refuel. Again we have a rather bloodless but suspenseful scene as Jeff kills a handful of men with his .38. This part features the odd capoff where Jeff apparently considers taking a piss on the corpses:

He reached a hand inside the little pocket at the front of his trousers, held it there for a moment and then withdrew it. No one would come for them. They would lay unclaimed, all of them, and the gesture that had crossed his mind would be wasted.

Oddball moments like this are otherwise few and far between. For the most part it’s very much on the trash fiction tip, with verdant description of the Eurotrash surroundings, and lots of ponderings about the nature of terrorism and the like. But Jeff isn’t the sharpest, folks, because it soon becomes clear to the reader exactly why no one’s yet come to kill Jim Costa. Yet Jeff continues with his security detail, falling hard for Angelique on the side. What makes it all particularly lame is that Jeff has nothing to do with the finale, by which I mean he isn’t on the scene. Long story short, the terrorists take over a school in Bonn, threatening to kill the kids if demands aren’t met. But our hero’s all the way over on the French coast and all this is relayed via phone – a lame, copout “climax” for an action novel.

Instead it continues on the suspense angle, as Jeff has finally figured out who is behind the terrorist ring. He ends up holding a gun on this person, but when his threats are laughed at, Jeff leaves with his tail between his legs…then realizes two can play at the terrorism game. In what is intended to display that Jefferson Boone’s just as tough as his enemies, Jeff kidnaps Angelique and threatens to kill her if the terrorism in Bonn isn’t called off. This leads to a lame denoument in which the main villain’s killed off by someone else, and Jeff gets in a brief fight with his underling. By novel’s end Angelique informs Jeff that he’s just as much a bastard as the terrorists he claims to hate – we’re to understand the two were in love, so this is supposed to be crushing, but at this point the novel has become a wearying read and you just wish everyone would go away, already – but Jeff shrugs it off and hops on a plane. Next stop America, for some more sex with Judy, from the opening chapters.

The Game Of Terror just sort of goes on and on, and in that regard as well it’s similar to Stark. I still say the Revenger books are superior because they’re at least shorter, but ultimately Messmann’s wordy, literate style is at odds with the fire and brimstone the men’s adventure genre demands. And I’m starting to think he didn’t write the almighty Sea Trap; maybe he did the initial manuscript and series producer Lyle Kenyon Engel hired some unknown contract writer to fix it up into the pulpy, depraved masterpiece it became – because honestly I have a hard time believing that the same author turned out this slow-churning book.
Posted by Joe Kenney at 6:30 AM

Thanks for an informative review that saved me a few bucks. ;-)