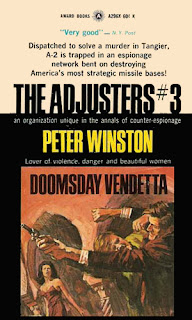 My assumption is this third Adjusters was written by whoever did the second volume, which I’m guessing was Jim Bowser, who, in addition to Paul Eiden and Jack Laflin, was one of the three writers on this short-lived series. I don’t think it was Eiden, who clearly did the first volume, given internal evidence. Eiden’s style doesn’t seem as apparent in Doomsday Vendetta, the “Adjusters” setup follows that of the previous book, and the female characters are only mildly exploited.

However the similarities to The ABC Affair are strong; “hero” Peter Winston is pretty much a sexist asshole, even more so than the genre norm, and one gets the impression the author watched the Connery Bond films, took notes, but forgot to temper his hero’s assholic, arrogant nature with any charm. I’m repeating myself because I wrote the same thing in my review of the previous volume. Well anyway the complaint holds true for this one. But if anything it’s more overboard. Winston, who has a “special kind of viritily” which makes him have to shave twice a day, is such a babe magnet that he merely has to look at a woman and she’s his. But like with the previous book, his frequent scores are off-page.

With no setup from previous books, we meet Peter (as he’s referred to for the most part) as he’s just arrived in Tangier – and promptly being propositioned by the sexy young babe who acts as the White Whittle rep here. Like last time there’s a huge underground network of “A” operatives for the company, which is known around the world as a construction and etc type of outfit, but also dabbles in a little “adjusting” for liberty and justice. So this girl, Pat, knows that Peter is a specialist from the company, but apparently has no idea he’s an undercover agent sort of dude. Anyway she’s too busy telling him she’s going to jump his bones as soon as possible.

Peter is here because Pat’s boss, the main White Whittle rep in Morocco and another of those undercover “A” agents, has been murdered. Our hero will stay here in Morocco for the duration of the novel; this is the first installment that doesn’t give us a scene at the company HQ in New York. While checking out the office Peter’s shot at by some unseen assailant, and ends up chasing him through the bazaar, toting his Magnum revolver. This will prove to be one of the few action scenes in the novel; like last time, much too much narrative is given over to Peter sitting around.

The action scene out of the way, the author gets to the sex posthaste; this volume I guess you could say gets a bit more raunchy than the last one, mostly courtesy goofball lines like, “They fused together and [Peter] gave her the caveman type of love she begged for.” As mentioned Peter’s a bit of a dick, so to speak, so he makes sure Pat understands this is a casual sex sort of thing and he’ll be free to screw any other woman he pleases, and also don’t expect him to stick around ‘cause he’s an important Adjuster and all. I mean this sort of thing should be understood, it just comes off as assholic when the dude bluntly tells it to the lady’s face.

And right on cue Peter comes upon another lady, Kristina, sexy blonde who is part of an all-female magic act. No exaggeration, Peter will spend the rest of the novel banging her. That’s pretty much the extent of what he does in the novel. Honestly it’s like a pseudo-sleaze paperback with Morocco travelogue replacing the actual hardcore material. The murdered Adjuster uttered a phrase to the attending doctor, his last words: “Newk she wrote.” Peter at length deduces the “she” is Kristina, blonde American beauty who had a thing going with the murdered Adjuster – or was it another girl in her magic act? Peter also deduces – quite ridiculously – that the dying Adjuster was struggling to say “new king,” which just came out as “newk,” likely referring to the new king of Morocco, who is pro-American and in danger from the native radicals for it.

If nothing else this allows the author to pad pages as Peter investigates this line of reasoning, even though it should be clear as friggin’ day that “newk” means “nuke.” Peter won’t figure it out until near the end of the book – which by the way is again deceptively slim. This is a very slow-going book. Gradually Peter will hit on the fact that Kristina and her magic group are up to something nefarious. And meanwhile Kristina’s throwing herself on him with abandon, which leads to more of that Peter Winston “charm” in action: Kristina rakes his back rather sharply before the expected sexual tomfoolery, for which Peter slaps her “hard” in the face, telling her, “Don’t you ever, ever do that again, you hot little bitch!” Of course, this only makes Kristina all the more eager for some of that good Adjuster lovin’.

And as mentioned this is pretty much the extent of Peter’s “work” for the majority of the novel…he dates Kristina, going around Morocco with her group, sleeping with her every night. Along the way he also finds the time to get cozy with Toni, the other hot blonde in the magic group; she’s initially frosty, but that rugged Peter Winston virility soon thaws her out for some more largely-undescribed sex. There’s also some lame mystery here that Toni might’ve been the “blonde” seen with the murdered Adjuster in his final days; she wears a wig during the shows, because Kristina demands she get the star treatment as the only blonde in the group.

Action is even more sporadic than previously. There’s a part where Peter contacts another local Adjuster – like last time they’re all over the pace – and they pose as air conditioner repairmen or something and end up getting in a shootout and then briefly caught. Peter frees himself with a gadget watch that has a blade in it. We see some of the same gadgets Peter used last time, like the noise blaster thing that deafens opponents. His trip down south here only confirms that Kristina’s involved in some bad stuff – printing anti-American propaganda for the native radicals – but our boy continues to sit on his hands, biding his time.

Later on some dude attacks him and Peter tosses him off a cliff, killing him…and in one of those arbitrary pulp developments it turns out not to be a spy or anything, but Toni’s abusive husband! After showing Peter the proper appreciation, she begins spying on her magic group for him. It just sort of goes on and on. Peter even has the time to head back to Tangier and “reconnect” with Pat. That’s how leisurely-paced this installment is. Not until the homestretch does the author realize he’s writing an action yarn, and suddenly gives us the book this should’ve been all along. Peter deduces that the “newk she wrote” was actually “nuke ship Rota,” ie a nuclear submarine heading into the Morroccan port of Rota.

Now, way too briefly due to the dwindling pages, we have Peter scuba diving and setting bombs, then getting in a gunfight with Kristina’s group. Crazy shit here that’s barely explored due to all the page-padding that came before, like the revelation that one of the “women” is really a dude in drag! Per pulp standards, though, Peter himself doesn’t shoot any of the women, with them either hit by friendly fire or being inadvertently blown up in the explosives Peter set.

And that’s all she wrote for this third installment of The Adjusters, which was marginally better than the previous volume, but still not that great. Man, I know they can’t all be winners, but I’ve been reading some blasé books lately. Well, I still love them all, even the ones that suck – I’d still rather read Doomsday Vendetta than whatever crap Oprah’s peddling.
Posted by Joe Kenney at 6:30 AM