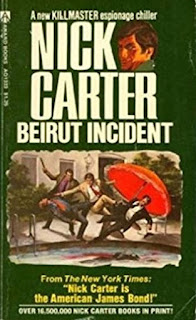 Forrest V. Perrin, a veteran pulp writer, turned in his sole contribution to Nick Carter: Killmaster with this volume. With a plot about Mafia killers and a back cover slugline announcing “MASSACRE,” it appears that Award Books was looking to ride on the coattails of The Executioner and other mob-busting vigilantes.

However, Perrin writes the novel more along the lines of a hardboiled ‘50s private eye yarn; tellingly, Nick (who narrates the story) at one point reads a novel by Richard Gallagher. Both the sex and the violence are toned down, and the story seems to occur twenty years before it’s set – late in the novel Nick handles one mobster by locking him and a nude girl in a hotel room and calling up a newspaper reporter to exploit the scandalous situation! And yes, Beirut Incident is indeed about the Mafia – one of the few instances in which Nick tangles with the Cosa Nostra – but the title actually does work into the story and isn’t just an example of Award slapping any random title on a manuscript, which per Will Murray’s research they were wont to do.

Beirut, Nick learns from his boss Hawk, is being used by the mob to smuggle in Sicilian killers. Per Hawk, the old dons of the American Mafia are pissed that the organization has been taken over by new blood, young punks who act more like lawyers or businessmen. They want a return to the old ways – the violent ways, where things were resolved by force and not paperwork. To this end they’ve begun importing goons from the Old World, natural born killer types who will help these old mobsters show the new, wussified mobsters how it’s done. Through some laborious reasoning, Beirut is the locale they’re using to secretly bring the Sicilians into the States. Actually now that I think of it maybe “Beirut Incident” was a title Award came up with and Perrin had to figure out a way to work it into a story about Sicilian mobsters.

Nick, who when we meet him happens to be in Lebanon, chasing down a terrorist in the desert, is brought onto the job by Hawk. His mission is to smash the Sicilian-smuggling ring and also to kill the members of the Council, ie the group of old dons who run the American Mafia. Nick has been especially requested for this job by no less than the President. Nick heads to Nicosia, the “sewer of the Mediterranean,” and bullies an old acquaintance into creating a new identity for him. This guy seems to be working for someone else, but Nick’s a bit clueless this time around and disregards the obvious warning signs – one of the many pitfalls of writing these sorts of books in first-person.

Now posing as “Nick Cartano,” a Sicilian-American, Nick heads for Beirut, the “cesspool of the Mideast” (one can almost detect a pattern here; I kept waiting for Nick’s next stop to be “the shithole of Arabia”). He slums around, hoping to bump into a lead. This happens when he randomly saves some guy from being hit by a car, and the guy turns out to be the nephew of the top-ranking don in New York. This is Louie, an affable sort who, we’ll gradually learn, isn’t involved with the mob’s dirty half and solely works in its legit operations. Regardless Louie is of course here as part of the Sicilian-smuggling ring and as expected Nick’s hit the jackpot without much effort. After hitting a few bars with Louie they’re BFFs, and when Nick drops a few hints that he’s a tough s.o.b. on the run from the law due to some stuff in Sicily, Louie takes the bait and offers him an exciting job in America.

Here the plot becomes even more bizarre because running the smuggling operation is a smokin’ hot and stacked Chinese lady named Su Lao Lin, who happens to be the top Red Chinese agent in the Middle East. Nick knows this because he saw her file recently and has a photographic memory; also because she’s one of the most beautiful women he’s ever seen. When Louie brings in the new guy there is of course some hot and heavy stuff going on in the air when Su Lin gets a gander at Nick. She practically pulls him into the next room and, after much groping, Nick props her up on a desk and does her. Perrin though isn’t too explicit – again, the vibe is of an older pulp novel – with the extent of it being stuff along the lines of, “At the first penetration she gasped aloud.”

Su Lao sends Nick off to get a fake passport, and sure enough it turns out to be courtesy the same dude who did the “Nick Cartano” passport for him. In other words, this is the “other job” Nick suspected the guy of secretly having; he’s the man behind the passports for Su Lao Lin’s Sicilian mobster pipeline. Oh and why the top Chinese spy of the Middle East is helping the Mafia is something left unanswered; Nick wonders about it a bit and moves on to other things, Perrin keeping the ball rolling to prevent any questions. The problem is, this guy not only knows Nick’s an imposter, he also knows he’s an AXE agent, so we get a bit of nicely-done suspense as Nick tries to figure out how to handle him.

And our hero’s a bit heartless, even though he makes a few passing mentions on how he feels bad about it. He also knows Su Lao needs to be silenced. So after yet another somewhat-descriptive boink, Nick plants some plastique under the woman’s bed and catches a redeye flight to New York. He doesn’t even find out the bomb’s gone off until later in the book, getting confirmation that Su Lao is dead. This was one of the lamer handlings of a villain I’ve ever encountered in the genre, and Perrin should be ashamed of himself.

At this point Beirut Incident becomes more of a Mafia yarn and less of an international espionage thing. However it’s clear that Perrin is breaking the back of his story to make it fit in the men’s adventure genre; Nick, new on the scene as a Sicilian mercenary, instantly sets the two major Mafia factions against one another, and it would be clear as day that the new guy is responsible – I mean, reports of course come in from Beirut that both Su Lao Lin and the passport-forging guy are dead, and Nick was the last person seen with both of them! And whereas the two families here in New York have had a friendly rivalry that hadn’t resorted into violence, now corpses from each family are showing up, with clear – ie planted – evidence that the other family was behind it.

Louie’s uncle is Nick’s new boss – Don Joseph “Popeye” Franzini, a Mafia Council bigwig. He’s a wheelchair-bound curmudgeon who keeps Louie and his smokin’ hot niece Philomina out of the family’s illegal activities. There’s more burnin’-yearnin’ in the air as soon as Nick and Philomina see each other, but the latter plays it cool because as far as she’s concerned “Nick Cartano” is just more riffraff her uncle uses in his criminal pursuits. Nick of course is determined to correct this notion. The rest of the novel plays out in New York and I’m guessing Perrin lived there or at least had a thorough guidebook, because like a vintage Len Levinson yarn we get all kinds of ‘70s Manhattan details, down to street locales.

Action is infrequent and usually features Nick pulling some stunts on the mobsters, making it look like the work of the Ruggiero family, ie the traditional enemies of the Franzinis. Along the way he finds the time to get “familiar” with Philomina in somewhat-explicit detail; turns out she’s an undercover FBI agent and has taken this duty to bring down her uncle, who killed off Philomina’s father when she was a little girl. Nick tells her he’s a secret agent and all that jazz, and soon enough she’s feeding him info. However Philomina doesn’t play as much into the action as she would in a similar story of the modern era; there’s no part where she totes guns and helps Nick take out mobster scum, as would be mandatory if this novel were written today.

Perrin’s writing has that typical “veteran pulpster” flair, where he keeps things moving even if not much is actually happening, but like so many of those writers he basically drops the ball in the finale. After cooling his heels the entire book, he rushes through the climax, literally killing off the majority of the villains off-page thanks to a bomb Nick’s planted. Even before this we’re merely told of all the violent action Nick’s caused, with various mobsters getting in shootouts off-page. The last pages feature “so-and-so was killed” sort of expository dialog and most of the time we have no clue who the hell just got offed. As usual with this sort of thing you wish the author had spent a little more time on this action stuff instead of rushing through it.

As mentioned this was Perrin’s only Killmaster. He published a lot of books, some under pseudonyms and some under his own name – one of these was The Don a Godfather cash-in from 1971. I tried reading it a few years back but found it a little too dry for my tastes. One of these days I might give it another try.
Posted by Joe Kenney at 6:30 AM

As always an interesting read. I'm looking forward to you reaching the ones Gayle Lynds wrote, since they are her earliest genre novels.

Like you, I of course don't like the idea of the hero getting rid of femme fatale in such an indirect way, and "off-screen" (the way you describe what happens to "Su Lao").
But it'd always interesting to hear that it happens at all in a story. Does the Nick Carter series have a lot of villainess characters that he deals that roughly with? (I barely know it.)

Having just written an article about Samson Pollen's paperback cover art for ILLUSTRATION magazine, I looked back at your Killmaster posts and noticed this is one of the Killmaster covers Sam did.