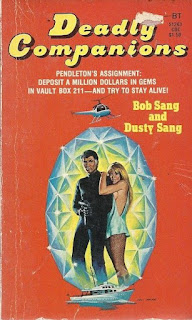 To address the elephant in the room straightaway, Ken Barr’s cover clearly rips off the poster for Diabolik, one of the cooler films of the ‘60s. And while Barr’s art is as great as ever, unfortunately it does not convey the true vibe of this novel, which is more of a light caper sort of thing. The main character at no point dons black garb nor totes a submachine gun, and the main female character isn’t even a blonde. However diamonds do play into the plot, so that at least is accurate.

The novel almost comes off like an installment of a series that never was. Protagonist Jacob Pendleton isn’t given much setup – not even much of a description – but we’re informed his various past adventures have become almost legendary in his home base of Chicago. He has a circle of friends, one of them being the commissioner of police, which lends the novel the vibe of a ‘30s pulp. Otherwise we’re not given much info on Mr. Pendleton. He has a penthouse with a view of the Chicago skyline and he’s got a luxury yacht; he’s got a chaffeur/bodyguard named Willie who’s like a karate master. He picks up ladies with ease due to his dashing looks and ruggedly virile charm – take note, though: there’s zero in the way of exploitative stuff, with the violence minimal to the point of PG and the sex strictly off-page.

The Sangs (not to be confused with the Spangs) toss us right into the story with little setup or explanation. We meet Pendleton as he’s coming out of a concert, his palm bleeding; his heavyset pal C.S. Barnes just introduced him to a lovely young lady named Nadia O’Connell, daughter of fellow adventurer Charlie O’Connell, and when Nadia took Pendleton’s hand she sliced his palm open with a serrated fingernail, then happily walked away. Now Pendleton’s left the concert early – he detests the sight of his own blood, we’re told – and retreats to his limousine, where chaffeur Willie tells him some dudes came by to deliver a note: Stay away from the girl.

This bizarre setup will only be repeated throughout the novel – this is one of those books my friends where I didn’t have a clue what was going on most of the time. Pendleton quickly deduces that the palm-cut and the letter were tests courtesy Nadia’s father; he’s a notorious hardcase and likely is testing Pendleton’s mettle before offering him a job. This apparently is what Pendleton does for a living – he goes around the world on various exotic jobs. He frequents a bar tended to by an old man and his grandson and both discuss how “you can always tell” when Pendleton’s about to go on a new affair because of a look in his eye. Again the whole thing is like an installment of a pulp series that never was; the reader really feels as if he’s missing backstory.

Pendleton has already arranged to have dinner with Nadia the next night, where she admits that the whole palm-cutting deal was an idea of her father’s. Her dad wants to pay Pendleton half a million to fly around the world and visit various banks; O’Connell has diamonds in each and he wants Pendleton to merely check and ensure they are there. This whole job had me so confused I had to re-read the section a few times. The important thing is Pendleton takes Nadia back to his yacht and has sex with her – all of it off-page, even the traditional exploitation of Nadia’s body. Bummer! Indeed all of Pendleton’s frequent scores will be off-page.

But this leads to more of that bizarre shit the narrative does little to explain. While Pendleton and Nadia get busy in the main cabin, Willie tools the yacht around the harbor. He sees a fishing boat in distress and goes to help, but the guys hit him with a tranquilizer and storm the boat. Then someone alerts the cops and this brings police comissioner Joseph Grimboldi onto the scene. Pendleton’s ship is a mess; Willie’s still tranqued out on the deck, and Pendleton’s cabin suite is destroyed and covered in blood, with imprints of Nadia’s curvaceous form in the blood. Jacob himself is passed out on the bed, also drugged.

This is all very strange and sordid…so imagine the reader’s shock when Charlie O’Connell shows up the next day and says his daughter is fine and it was all yet another test! And Commissioner Grimboldi is basically like, “Okay – I know that’s how you roll, Charlie.” It’s all so preposterous and weird; it’s like the authors had these visuals in mind – a yacht cabin covered in blood with imprints of a girl’s body everywhere! – but had no idea how to convey these visuals in the novel itself. And Nadia is okay, the whole contrived scenario an attempt to fool…who? Eventually we’ll learn Charlie O’Connell is having Mafia troubles, but this elaborate scenario serves no purpose in this regard. I mean folks it was at times a surreal experience reading Deadly Companions.

And for that matter, I don’t even know who the hell the “deadly companions” are supposed to be! Despite all common sense, Pendleton goes on the job anyway, but he flies around alone (picking up the odd stewardess or two), and Nadia isn’t his “companion” on the job. Perhaps it refers to young Peter Garabaldi, nephew of old Mafia godfather Dominic Garabaldi; he shadows Pendleton around the globe, checking the diamonds after Pendleton leaves the bank and ordering the occasional assassination attempt on our hero. But Peter and his grandfather are what pass for enemies in the novel, so they’re certainly not “companions.”

At length we’ll learn that O’Connell was pressured by the Mafia to start selling stolen diamonds as well as heroin, but it’s all so twisty and relayed so off-the-cuff that I had a hard time following the plot. What it boils down to is O’Connell, without giving Pendleton all the info of what’s going on, keeps sending our increasingly-addled hero around the world to visit these banks, and at each bank he meets not only Peter Garabaldi but also the same damn clerk. At each bank around the world. The novel quickly attains a repetitive tone, and it’s not helped by the lack of action. In Geneva someone takes a shot at Pendleton – on Peter’s orders – but misses, and another minor character sacrifices himself for Pendleton at one point. But our hero himself doesn’t pull a gun or fight anyone or anything. Mostly he just smokes his pipe and reads Nero Wolfe.

Women certainly go for his rugged charm, though; he picks them up with infinite ease, but there’s no naughty stuff at all. Nadia sort of emerges as the main female character, and she comes back into the narrative once Pendleton’s settled again in Chicago and trying to figure out what’s been going on for the past 150 or so big-print pages. At this point the authors kill off a character off-page – I spent the rest of the book assuming it was a fake story, only for it to turn out to be the truth – and finally Pendleton confronts old Dominic Garabaldi. This leads to a pages-long exposition from the godfather on what O’Connell was up to, why the charade of Pendleton flying around and always seeing Peter there (his job was to ensure the heroin was in the packets or somesuch).

Other than an eleventh hour car chase, in which Willie does all the work, there’s no big action finale. Actually there isn’t much of a finale at all. We learn that some strings are pulled and Peter Garabaldi will be arrested, but otherwise the novel sort of drifts to a muddled close. Pendleton heads back to his frequent watering hole, where the bartenders chuckle, “With Pendleton, it’s never over!” Referring again to his knack for action and intrigue. But it really was over for Jacob Pendleton, and I can’t say the reading public has suffered from the loss. The novel wasn’t terrible and it wasn’t great – it was just sort of blah, really, and more confusing than anything.
Posted by Joe Kenney at 6:30 AM

That cover is hilarious.

I'll take the cover and blurb and come up with a much better story than what you describe, Joe!