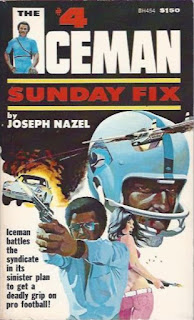 Joseph Nazel phones it in for this fourth installment of The Iceman; I knew going in that Sunday Fix probably wouldn’t be of much interest to me, given that its plot concerns pro football, but man, I didn’t think the novel would be boring. It’s more Banacek than Shaft as Henry Highland West, aka “The Iceman” (though usually referred to as “Ice” in the narrative), mostly just makes phone calls and sits around in his various opulent domiciles, offering homespun philosophy and pondering man’s inhumanity to man.

The novel opens in Los Angeles, where Ice is watching his newly-acquired pro football team, the Rattlers, getting their asses kicked by the Rams. Ice puzzles over this because his team’s made of good players but it seems they are intentionally fumbling plays. All very strange because Ice has hired “the best Black coaches” in America to handle the team. Oh and curiously, “Black” is always capitalized when referring to black people, yet “white” is never capitalized when referring to white people. Pretty racist if you ask me. And of course the villain’s a white guy, too, a sports-betting honkie named Reggie Owens who, Ice reflects, seemed all too willing to bet $40,000 on the Rams…as if he knew the Rattlers were going to lose.

After the game Ice visits the team along with his constant companion, colorfully-wardrobed Christmas Tree, who berates the players for their jive plays. Ice is more hesistant – and indeed will continue to be for much too long of the narrative. Even later, when he receives a panicked call from the coach, Stewart, Ice doesn’t think too much of it. Meanwhile we readers know that Stewart has been pushed into a bad situation by team manager Ray Hubbard…the Syndicate has moved in, and is offering Hubbard, Stewart, and any willing players $10,000 each to lose games. Hubbard himself isn’t for it but believes the white bastards have some dirt on him, so he’s forced to play along. But Stewart has had enough, mulling over his troubles as he drinks – seriously folks, Ice is practically a guest star in his own novel – and finally calls the boss man to meet.

But three Syndicate goons ambush him as he’s driving up the twisty canyon road to Ice’s seaside home in Malibu, or wherever it is. Ice is already in his “blue Ferrari” (his schtick is that everything he drives, flies, or wears is blue) and racing down to meet Stewart, wondering why it’s taken him so long to get here. He arrives just in time to see Stewart shot dead, then Ice has his .38 in hand and is in a firefight. Nazel greatly reduces the gore of the earlier volumes, with the goons just getting shot and falling down – previous installments had brains blasted out and whatnot. That being said, Ice does take down one goon with a kung-fu kick that comes straight out of Mace. It’s goofy, though, because Ice wastes the three goons…then Ray Hubbard shows up on the scene; he was also tyring to prevent Stewart from telling Ice what’s been going on. Ice suspects Hubbard of hiding something, but just sort of brushes it off…even after Ice has found an envelope with $10,000 in it beside Stewart’s corpse.

After this it’s to the slow-burn…Ice heads back to his palatial desert home, The Oasis, and cooks up some soul food for his usual entoruage: Tree, Kim (aka the Chinese one), Solema (aka the African one), and Jan (aka Kim’s sister, stated as being “the newest member” of the group). There’s also Maria, the sexy programmer for the Oasis computer, named Matilda. As ever Nazel doesn’t much bring the female characters to life, nor does he even much describe them – and also as ever, for a guy who runs a high-dollar cathouse (which is what the Oasis technically is), Ice himself shows little interest in women. There’s even a “hmmm” moment where we’re told that Maria’s revealing dress “would turn any man to her side…any man but Ice.” However later Ice does get busy with Solema, who as ever is presented as Ice’s main woman, but Nazel leaves it off-page, same as he does with all other sex scenes in the series.

Action is minimal; after the firefight with the goons who come to kill Coach Stewart, Ice doesn’t do much of anything. Even by page 160 there still hasn’t been much in the way of action (as usual the novel runs to a too-long 221 pages). Ice makes calls from the Oasis to try to get leads; one of his contacts is Numbers Nate, an older street hustler in Harlem who is “like a father” to Ice. Due to the many scenes that cut away from Ice (again, the poor guy’s a guest star in his own book this time), we know that “jive honkie” Reggie Wilson, the gambler from the opening chapter, has come up with the idea of getting the Mafia into the pro football scene, taking his idea to a capo named Roman Touletti. This gets its own too-long subplot, with Wilson often meeting with Touletti and going over strategy. There’s also lots of page-filling about Hubbard, the team manager, and a new Rattlers player fresh out of college who struggles with this whole “fumble plays for ten thousand bucks” scheme.

Things don’t pick up until near the 200-page mark. First Tree is almost ambushed by three Mafia thugs in Vegas, but Tree’s wise to them; when the decoy offers info for twenty bucks, Tree’s inistantly suspicious that someone would want such little pay for what he claims to be important info. So Tree whips out his .45, takes the guy to a remote location, and ultimately gets into a firefight, one in which Tree gets knocked out but still manages to kill his would-be ambushers before falling unconscious. At the same time Ice choppers out into the desert on his personal ‘copter to meet with Owen, who has called him with an offer – Owen’s learned that Touletti plans to kill him and wants thirty thousand dollars from Ice and safe passage to South America in exchange for all the info on the blackmail scheme.

This leads to the memorable scene of Ice, on the ground, wielding a .44 Magnum in one hand and a .38 revolver in the other as he takes on a small plane in the desert, the Mafia killers onboard having come to take out Owen before he could blab to Ice. It’s a cool scene, one of the moments depicted on the cover, but again Nazel dials back on the violence – Ice manages to hit the guy with the automatic rifle in the head with his .44, and later lands his ‘copter on top of the plane and crashes it. Meanwhile Tree’s gotten captured and taken to Touletti’s Vegas lair, so the finale features a rushed climax in which Ice leads his doll squad of blacksuited fillies on an assault of the compound. If only the entire novel was like this! We’ve got Kim and Jan taking out goons with kung-fu, Solema blowing ‘em away with a shotgun like a regular Coffy, and even Ice getting in on it with some knife-throwing skills.

But overall I found Sunday Fix to be very boring, and as stated above I get the impression Nazel phoned this one in. I mean he was churning these books out, so it’s only understandable he’d lose a little steam after a while. It’s kind of fun for the topical blaxploitation vibe, though, with Tree’s colorful pimp wardrobe squarely placing the book in the early ‘70s. Also Ice and his companions almost constantly use the phrase “Whatever’s fair!,” so I assume this must have been the hip black (sorry, “hip Black”) phrase of the moment. Also “What you say!” gets repeated a lot. And Ice himself continues to be the epitome of ‘70s cool, doing “Nogare breathing exercises” before practicing his karate moves, then fixing himself a Highball and pondering over the toughness of the world and how he’d kill just to see another beautiful sunset from his palatial desert home.

The series ran for three more volumes, ending in 1975 with the seventh installment, but currently this and the first two installments are all I have. In fact I was surprised to even discover this and the second volume sitting together in the “Rare Books” section of the downtown Dallas Half Price Books back in 2012 (for three bucks each!). But to tell the truth, The Iceman just leaves me cold (lame pun alert), so I don’t plan to seek out any of the volumes I’m missing. I’d say if you want a little blaxploitation with your men’s adventure you’d be much better off seeking out Dark Angel.
Posted by Joe Kenney at 6:30 AM

I read a few of these in high school. Not bad, interesting idea, although I was a bit put off by the "hero" of the books being basically a pimp. It seemed like each volume had a cover illustration of Ice on some kind of different vehicle—this is the motorboat one! This is the helicopter one—that seemed kind of lazy. But what do I know? Thanks.

Back in the day ads for this series, and others from the same pub, appeared regularly in 'Adam Film World' mag!