The Girl In The Telltale Bikini (Operation Hang Ten #6) 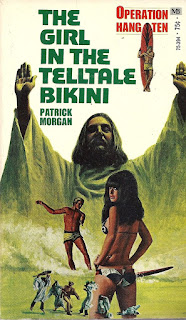 The Girl in The Telltale Bikini, by Patrick Morgan
No month stated, 1971  Macfadden Books

As mentioned in my review of Topless Dancer Hangup, this is actually the sixth volume of Operation Hang Ten, whereas it’s often mistakenly listed as the seventh. The “other books in the series” list in the front makes this clear, and as stated in my previous review, Topless Dancer Hangup features a recap of hero Bill Carwright’s previous six adventures. But, as with most of these “produced by Lyle Kenyon Engel” joints, there isn’t much continuity to worry about anyway, so perhaps the point is as they say moot.

George Snyder once again serves as “Patrick Morgan,” and apparently he did so for the entire series; his style is in effect throughout, though some of the scathing comments on society and ruminations on women have been slightly toned down. But other Snyder mainstays are still here, like the strange insistence on fistfights over all other forms of action – seriously, it seems like Bill’s constantly dropping or losing his “.22 Magnum” and having to resort to his fists. That being said, there are some brutal brawls throughout, with shards of shattered skulls piercing brains and faces just generally smashed.

The plot of The Girl In The Telltale Bikini is almost surreal, most likely because Snyder was winging it or perhaps was given an outline by Engel and had a hard time capturing it. But you know something’s up when the “climax” involves the suddenly-revealed main villain expositing on the scheme and explaining what has been happening. I tend to think it was a case of Engel coming up with the plot, as it follows the old standby of Bill Cartwright having an evil clone, a story Engel previously ran in the Nick Carter: Killmaster entry Double Identity. But, just as with that earlier novel, the “evil clone” doesn’t really pan out and in fact causes more questions than anything, as just as an “evil Nick Carter” served no purpose in Double Identity, neither does the “evil Bill Cartwright” in this one.

A US spy ship has sunk near the coast of Sidney, Australia, and surprisingly this doesn’t much concern Los Angeles section chief Jim Dana of Operation Hang Ten; but when his government associate tells him that a “Bill Cartwright” has been spotted with all the other surfers making use of the phenomenal waves created by the jutting hulk of the ship, Dana perks up – he knows Bill is in California, not Australia. And so he is, enthusiastically screwing his latest girlfriend, a “top-heavy” blonde named June Blue. Bill’s trailer is even swankier this time around; we learn there’s not only a mirror above the bed, but with the touch of a button multicolored lights will flash over the bed. Another button activates rollers beneath the mattress, and June has become very excited about this particular feature.

A recurring bit is how Bill, only “pretending” to be heartless (yeah, right!) breaks it off with this latest girl so he can get on to his secret spy job. This seems to be the last we’ll see of busty June, but we might be surprised. Off Bill goes to Australia, where he goes about his usual method of espionage: loudly proclaiming himself to be Bill Cartwright and getting in frequent fistfights. Not to mention promptly getting himself some local booty; in almost no time he comes across a sexy brunette with a flat tire, and after fixing it Bill finds himself invited back to the girl’s place – and also she tells him he can keep his trailer in the parking lot of the bikini shop she owns.

Her name is Lynda Rahm and she claims to be Turkish or Greek or something; who really cares where the hell she’s from, given her “darker than tan” skin and her “small but ample breasts?” But folks ol’ Bill is pretty dumb this time around, because Lynda is clearly hiding stuff from him, but Bill just sort of goes with the flow and ignores all the red flags. Plus he takes his time about getting her in bed; that being said, when the good lovin’ happens this time, it’s more explicit than the material in the other two volumes I’ve read. In fact Bill and Lynda’s first “encounter” goes on for a few pages of hot and heavy stuff – plus it’s another of those red flags Bill ignores, ‘cause in one of his off-hand ruminations he informs us that women in their 20s and 30s can’t screw worth a damn, whereas women in their 40s and 50s will bang your brains out if you give them the chance, and Lynda’s sack skills are a lot better than her claimed age of 22 would imply.

These off-hand ruminations are a recurring series gimmick, as mentioned a bit toned down this time but still priceless for their reactionary, unacceptable-in-today’s-progressivised, “Miss America 2.0” world. In addition to random bitchery about tourists clogging up the beaches (a series mainstay, but then Bill’s a surfer so it makes sense this would bug him), we get some observations about women, in particular this doozy that would end a career if someone would have the audacity to post it on Twitter:

[Lynda’s kitchen] smelled of just-cooked bacon and coffee aroma. In America Lynda would have been considered a neatnick as a housekeeper. American womanhood was too busy striving for achievements to keep anything but a sloppy house. In Australia Lynda would have been considered an average housekeeper. The women of Australia knew their place and stayed in it.

Bill finds that his name sends young women scurrying away from him – even Lynda initially seemed taken aback when he told her his name – not that this stops him from running around the beach and bullying the sexy surf bunnies. They all run away from him when he announces himself; later he’ll learn that the fake Bill, also a blonde American surfer, is sort of a pimp for Maha Lon Caffrey, guru of a nearby cult. Bill and Lynda crash a meeting at the temple, and here Bill gets a glimpse of his double, who goes onstage preaching how Maha Lon saved him. Of course the real Bill responds with his usual brusque manner and instantly starts a brawl. But Bill has a reason for being pissed, as the previous night a couple temple freaks stomped him in yet another brawl; Bill’s apparently mangled face is only occasionally mentioned by the other characters.

Kudos to Snyder for having the two Bills sort things out in a way apropos to the series: a surfing duel! In fact there’s a bit more surfing material in this one than in the other volumes I’ve read. But just like the “fake Nick Carter” plot fizzled out without much exploitation in Double Identity, so too does it in this novel; the fake Bill is anticlimactically removed from the narrative, and later it will be vaguely explained that he was a crewman on the sunk US spy ship. Why was he posing as Bill? That’s not really explicity stated; the implication is that Bill Cartwright is sort of known on the surfing set and the fake Bill and his companions were looking to exploit his image, in particular his skills with picking up the ladies.

Why? Because Maha Lon’s temple is a cover for a sort of lair of Arabs who smoke hash while they auction off sex slaves, the young women abducted right off the beach and their minds fogged by drugs. At this point the reader can see that George Snyder is basically throwing stuff at the wall to see what sticks. It’s made all the worse by the laughably poor security these Arabs have; Bill pretty much just walks into the temple, finds the secret passageway, slips on a conveniently-discarded hooded robe one of the cultists left behind, and walks right in on the proceedings. This after the other temple guys beat him up, the previous night – I mean they know he’s the real Bill Cartwright and could undo all their plotting, so why don’t they kill him? Why just beat him up? But Snyder plows on, hoping we don’t think to ask these questions.

Snyder keeps it all moving with frequent fistfights and car chases, not to mention the occasional sex and surfing sequence. Lynda is Bill’s main woman this time around, save for a surprise reappearance by another female character in what is one of the novel’s many hard-to-buy plot developments. But speaking of Lynda, she’s always around when Bill’s ambushed, she has an uncle who owns a shop right beside Maha Lon’s temple, and she has “special” bikinis in her shop which she says aren’t for getting into the water with. She’s also a helluva lot better in bed than she should be, given Bill’s worldly experience, and all this should set off Bill’s warning signals, but instead he just sort of lets things play out. He’s a little muddled because Lynda’s hired him – Bill’s cover being a private eye – to find a friend of hers who is one of the abducted women.

The climax features more brawling, though for once Bill does shoot one or two people with that damn .22 Magnum he’s always dropping. But again the dude just waltzes right into the temple while an auction is going on, the Arabs too stoned to worry about something so minor as security, and starts up a riot. When the main villain is revealed, it’s so hard to buy that Snyder must spend several pages explaining everything. But it turns out that two of the crewmen on the sunk ship – one of whom was the guy who pretended to be Bill – stole a bunch of secret documents, and were sending them over to Arabian bidders via arcane means. The finale at least is fun, with Bill and boss Jim Dana sitting on the beach and watching a bunch of girls model bikinis, all to discover which one has the final coded message hidden on it – the message only revealed when the bikini is wet.

Despite the almost surreal vagaries of the plot, I think I enjoyed The Girl In The Telltale Bikini the most of the Operation Hang Ten books I’ve yet read. Too bad the series is so damned overpriced, but at least I still have a few more to read.
Posted by Joe Kenney at 6:30 AM

Someone on a movie site I go to said that, being about a surfer, this should have become a movie series with Aron Kincaid, especially since the character even resembles Kincaid on the covers.
(Of course, he would usually play a kind of "ditzy" surfer character in beach movies, but maybe that still could've worked.)