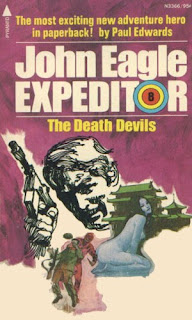 This volume of the Expeditor is courtesy Robert Lory, who salvages the series after the bore that was the previous volume. The Death Devils is sort of like the Expeditor equivalent of a “cozy,” as it delivers everything the series is known for: an exotic setting, a pulpy threat, a foreign damsel in distress who speaks in overly-florid English, and all of John Eagle’s fancy gadgets, from his chameleon suit to his exploding arrows.

One difference is that this volume isn’t overly padded with minor characters and their subplots, as earlier installments were; Eagle comes into the tale early and carries it throughout. The titular “Death Devils” are insects created by the Red Chinese to destroy American crops, and the intimation is that further strains might be created that will go after human flesh. The bugs are the handiwork of a group of Chinese scientists who visited US soil a year ago, checking out the work of their American counterparts. The insects created by the Americans were for the purpose of eating crop-damaging insects, but of course the Commies took the project into more nefarious realms.

Merlin, Eagle’s wheelchair-bound codger of a boss, is informed by the Secretary of State that these Death Devils might soon be set loose on US soil. Word has come from Yang, head of the Chinese group of scientists who created the insects; Yang and his fellows were trying to replicate the American strain of the bugs, but the wily Colonel Chou took over the project and turned it into the crop-destroying, flesh-eating mess it currently is. Yang, knowing his end was near, wrote the president of the US, asking him that he send someone to China to rescue Yang’s daughter, Orchid, and bring her back to the States – Yang being sure that he would soon be dead, so his daughter would be able to let the Americans know everything about the Death Devil project.

Anyway it boils down to this – there’s a hot (and virginal) chick in mainland China and Eagle has to infiltrate the country and rescue her. Plus he’s got to destroy those goddam bugs. The first quarter of The Death Devils plays out on more of a suspense and espionage bent, with Eagle taking over the identity of a fobbish chemicals salesman so he can replace the man on his already-approved trip into China. Merlin’s plan has Eagle killing some guards on a train and fooling people into thinking he’s a Russian, so as to confuse the Chinese into who exactly has snuck into their country.

After that though the book settles into the pulpier territory the series is known for. Orchid Yang, grieving over the recent death (ie murder) of her father, staves off the advances of Colonel Chou (ie, the bastard who killed Pops Yang, or whatever Orchid’s dad’s name was). So then Orchid’s very happy to meet Eagle, who has snuck into this high-security compound in his invisible chameleon suit, killing a few guards in quite novel ways. For once Eagle’s brought along a spare suit – previous volumes have seen him comfy in his weatherproof and temperature-regulated suit while the women with him have had to endure the elements. Here though Orchid gets her own chameleon suit, and she proves to be a regular Sue Shiomi, taking advantage of being invisible as she wipes out Chinese soldiers with her kung-fu skills.

Eagle leaves behind a ton of corpses after setting his explosives about the compound, and he and Orchid make their escape on a sampan. This sequence is very similar to an earlier Lory entry, #3: The Laughing Death, which Lory slyly admits in the narrative, for once having Eagle reflecting back on a previous mission. And to continue with the paralells, Eagle once again gets lucky while riding on a sampan – Orchid you see is so friggin’ hot for Eagle that she demands they have sex, here and now.

The Death Devils actually has the longest and most explicit sex scene yet in this series, but again it’s the Expeditor series we’re talking about here, so the scene features descriptive phrases like “love weapon” and sentences like, “What she was feeling was the growth of that part of him which was placed at her entrance.” I mean, I’ve seen hotter stuff in Loeb Library translations of the classics. At any rate, Orchid, despite being a virgin, has read up on a lot of banned sex-book material, to the point where she’s taught herself expert control of her “inner muscles,” shall we say, really working Eagle over good and proper. But to continue with the “man’s conquest” theme of the series, Eagle doesn’t just lay there for long, soon showing her what it’s like when a man takes charge.

This escape sequence goes on for a while, and is made up of the duo sneaking rides on various water crafts and running through the jungle – not to mention taking the occasional sex break. Seriously, Lory informs us that Eagle and Orchid stop to have sex about every other paragraph. Orchid though is the best female character in the series yet, able to fight alongside Eagle, but of course she (like all other female characters in the series) is prone to making stupid mistakes. Plus her dialog is grating; like sex Orchid has learned English from books, and despite only recently beginning her studies, she’s capable of saying words like “preclude.” And yet for all that she pronounces Eagle’s first name as “Chon.” But then, this sort of thing is typical of Lory.

The Death Devils themselves barely appear in the novel – they’d already been moved from the compound when Eagle arrived to rescue Orchid. We learn that Chou, who survived Eagle’s assault, has moved them to Panama, where they are being watched by a rebel army lead by a towering sadist named Snake. Upon getting Orchid onto US soil (after a nice scene involving a sub that shows up to escort them away), Eagle is given his second mission: go to Panama and destroy the Death Devils. Of course, Orchid manages to convince Merlin and Eagle to allow her to go along.

Lory works in a bit of lurid stuff when we see that Snake keeps a shack full of poisonous lizards and snakes, which he uses to torture people; all the more reason to be worried when Orchid, due to her (female) stupidity, gets captured – this despite the fact that she was wearing an invisible, blade and bullet-proof chameleon suit! (Again, women are incapable of doing anything right in the Expeditor series.) Eagle of course comes to the rescue, culminating in a nice scene where he must fight Snake, who has appropriated Orchid’s chameleon suit. So in other words, for once Eagle himself must confront someone who has taken an item from Eagle’s own bag of tricks, compounded by the fact that Snake pulls off Eagle’s special goggles so that Eagle is unable to see Snake during the fight.

Anyway, this one really does have it all, and might just be my favorite volume yet. It doesn’t have the lurid excess of my other favorite in the series, #5: Valley of Vultures, but The Death Devils has more of the series trappings you’d expect of the Expeditor (the chameleon suit and etc barely even appeared in Valley of Vultures). The novel’s a lot of fun, and another example of why I enjoy this series so much.
Posted by Joe Kenney at 6:30 AM

I quite literally just bought this a couple days ago at the local Half Price Books. Sounds like it should be well worth a read.

Nick, that's cool you found this book -- I don't think I've ever seen an Expeditor at a Half Price bookstore. Hope you enjoy it!