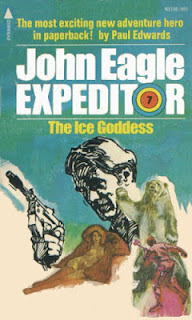 This volume of the Expeditor series marks the debut of Paul Eiden, the third author to serve under the “Paul Edwards” house name. Eiden’s writing is very similar to the other series authors (Manning Lee Stokes and Robert Lory), so it’s easy to see why series honcho Lyle Kenyon Engle gave him the gig. But man…Eiden takes an awesome and lurid plot and turns it into what is by far the most padded and boring installment yet.

What makes it so frustrating is that the last 50 or so pages of The Ice Goddess are so twisted and lurid. But to get there the reader must endure a snoozer of an opening 110 pages; this is the only book I know of where you could skip the first hundred pages and it wouldn’t make a difference. What makes it more sad is that the novel is only 172 pages long.

Anyway, this time John “Expeditor” Eagle is called in by his boss Merlin because Merlin’s people have detected something unusual going on in the Arctic…something about polar caps melting away, the possible eventual calamity that might ensue…something like that. Honestly, the threat here is so vague that you wonder why Eagle is even called in. There’s also the possibly-related detail that scientists are going missing; over the course of the past two years several top ones have just disappeared. (This is almost a retread of the inciting incident in #2: The Brain Scavengers.)

So Merlin sends his one-and-only Expeditor up into the Arctic on some vague wild goose chase…oh, and he puts Eagle in “the weasel,” a mega-expensive and mega-dangerous prototype snow-tank-vehicle sort of thing. Pages and pages ensue of Eagle driving the thing around; we’re endlessly reminded how dangerous it is, giving its inability to stop quickly on the ice and snow. Then Eagle spots a wayward Eskimo, being chased by a bear, and goes to help, destroying the weasel in the process.

Now Eagle is stuck with the Eskimo, who turns out to be a 14 year-old girl. She lives in an igloo with her husband, an 18 year-old with a bear-mauled leg. After dinner the husband offers his wife to Eagle, and Eagle accepts! My friends, you know it’s ‘70s pulp when the hero has sex with a 14 year-old girl. Eiden tries to play it up that the girl looks and acts much older than her years, and how Eagle has difficulty even thinking of her as being so young, but still…

That same night a bear attacks and Eagle kills it with an axe, but not after the husband has been killed. Now ensues like fifty pages where Eagle just sort of dicks around with the Eskimos, building igloos, fishing with the men, and living with the young widow! You could honestly cut out pages 40-96 because they ultimately have nothing at all to do with the story itself…just endless detail about life among the Eskimos.

Eventually Eagle comes upon an American-owned trading post not far from the Eskimo village, but even here Eiden spins wheels. I shit you not, there are endless pages in which Eagle just plays chess with the store owners! Have I mentioned that by this point a hundred pages have elapsed and Eagle hasn’t yet gotten into a single fight?

Anyway, after a full month Eagle is able to get back in touch with Merlin’s people, who send in an airplane to pick him up – cue more page-filling banality. Now, finally, around page 110 the novel begins. Eagle is given a one-man atomic-powered submarine (!) and sent into the Arctic Ocean, to research the area Merlin’s people have deemed suspicious. (Humorously, Eagle’s destruction of the expensive weasel – all to save some Eskimo’s life – goes unmentioned.)

Eiden fills up more pages as Eagle zooms around the freezing depths. Finally though he finds the culprit behind the shrinking Arctic crust – a city built beneath a dome of ice, a city filled with jumpsuit-wearing women who plot the destruction of all men! Now this is trash fiction gold, and it boggles my mind that Eiden took so damn long to get to it. But what’s even worse is that he rushes through it – Eagle scouts out the place in his chameleon suit, trying to figure out who these women are. How much better it would’ve been if Eagle had scouted the place early on, been captured or something, and then spent the entirety of the narrative here in this depraved place.

For it truly is depraved – dubbed the “Amazon Queendom” by its ruler, a gorgeous and statuesque blonde of Scandanavian descent named Julianna, the place is an all-female compound in which men are forbidden; those few men who are here have all been (willfully) castrated, or have had sex-change operations, or are gay.

Not that this stops our ruler from having fun; as Eagle watches from a closet, Julianna lounges on her massive bed with a few transsexuals and castrated men who take turns orally pleasing her, before she has full-on sex with a gay male (one of the few men here who hasn't had "the operation"), encouraging him with a bit of cocaine. Actually the coke flows freely throughout this scene, and it’s only after Eiden has described the proceedings in full that he has Eagle turn away in disgust!

It’s all so crazy, especially coming after so many, many pages of banality. This section is the most lurid yet in the Expeditor series, even moreso than anything in #5: Valley of Vultures. I guess the only thing missing in this one is the fact that Eagle himself, for once, doesn’t have sex while on the mission, even after running into a pretty kidnapped scientist named Irene, who helps him escape in exchange for her own freedom. (Eagle’s only bit of hanky-panky this time is before the mission, and interestingly enough it’s with his American Indian girlfriend Ruth, whom we’ve heard of before but never actually seen – and it turns out Eagle treats the poor girl like shit, screwing her, leaving her to cry when he says he “might not return” from this mission, then wondering about what “real woman” he’ll someday marry, and then screwing Ruth again once she’s stoped crying!)

But still, Eiden does little to build up this Amazon Queendom. He pours on the action at the end, with hordes of jumpsuit-clad women coming after Eagle with assault rifles. Eiden doesn’t get much into the violence factor, though Eagle takes out a bunch of these women, doling out clean kills with his ever-present dart gun. (And also, I have to admit being a bit unsettled with the image of our hero blowing away a bunch of women, but then again the guy did sleep with a 14 year-old earlier in the book, so what the hell.)

The expected confronation with Julianna is underwhelming; whereas the other two series authors likely would have played up some sort of lurid relationship between Eagle and the “Ice Goddess,” Eiden instead merely has the woman threaten Eagle and run away from him. I mean, the potential was there, dammit…that lurid scene with Julianna and her consorts proves she was looking for a “real man,” and per Eagle’s past exploits we know he has no problems with getting busy while on a mission.

But then, the entirety of The Ice Goddess is really just missed opportunity after missed opportunity. Even the ending is stupid; after blowing up the Queendom (giving the women a chance to escape beforehand), Eagle gets in a fight with a few of Julianna’s (male) martial arts champions, kills them, and then tells Julianna that her empire is over. Instead of fighting she just shrugs and blows herself up with her handy grenade! Eagle takes off with Irene in his one-man sub and that’s it.

Eiden’s next contribution, #9: The Deadly Cyborgs, sounds like another pulpy plot, something about android Yetis(!), so let’s hope in that one he gets a better grip on how to write a men’s adventure novel. As it is, the endless padding and inessential detail really overwhelmed the lurid quotient of The Ice Goddess, turning what should’ve been a phenomenal installment into a total bore.
Posted by Joe Kenney at 6:30 AM

That reminds me of the wonderful backpeddling Stevie Nicks did on the meaning of "Edge of 17".