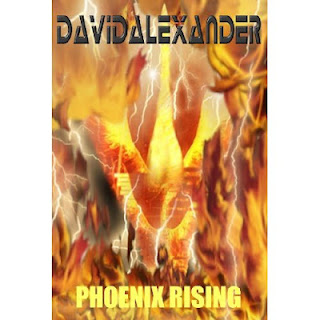 He also has a website, and a few months ago I wrote to tell him how much I enjoyed his work. After exchanging some emails, I realized Dave would make for excellent interview material, and so was very happy that he agreed to one.

Here’s the first part of the interview; in this one Dave focuses on his start in the writing world and the Phoenix series.


Tell us about yourself – how did you get into writing, and what were you doing before?

As a child I began writing spontaneously. I’m sure it’s a common development; just as children often like to draw, they also like to write. At any rate, when I was seven I was mentioned in a newspaper article for having written some poetic verse. I don't know if it was actually any good, but I can say that unlike others I was never coached or was the product of efforts to mold me into something my elders, instead of I myself, wanted. Just the opposite, in fact. I come from a working class family background where letters weren't and still aren't held in particular esteem.

What was your first published work?

Probably the poem that sparked the newspaper item, and certainly the poetry that followed which found its way into miscellaneous publications before I reached my teens. Truthfully, I had no desire to write prose fiction until later on. Prior to that my only aim was to write poetry. I still compose from time to time, but only when my muse speaks, or when, to paraphrase Sherlock Holmes, "the fit is on me." I haven't felt compelled to compose for some years, but awhile back I did manage to write a considerable number of poems.

How did the Phoenix series come about?

Phoenix originated as a convergence between my early aspirations to write booklength thriller fiction and Leisure Books' interest in expanding into that market. I hadn’t set out to write a series, per se; that’s just what was offered. They'd previously had a success with a series whose title I forget and wanted to increase their presence in the marketplace.

The first Phoenix title sold well enough for the house to sign me for another two or three series installments. In the end I wrote five in all, with a sixth and final installment planned which never materialized.

Was Phoenix planned as an ongoing series, or did you envision it with a definite end in mind?

I certainly envisioned the sixth book as the series conclusion, but I hadn't envisioned a final book when I'd begun writing the series. At that time I hadn't a clear-cut sense of how far I'd be able to grow the concept and characters, as Leisure had originally committed to a single book only. I turned in an outline for the planned sixth but it never materialized. At this stage I may have already been in the process of writing the Z-Comm series.

The Phoenix series is more over-the-top than anything I’ve read. What were some of your thoughts while you worked on each volume – were you just constantly trying to top yourself, to see how far you could go? What scenes/volumes stand out most in your mind?

I approached writing the Phoenix books in a deliberate manner. Principally, I set out to create what might be called a post-nuclear apocalypse noir series, and tried to work out how the elements of noir might function in this context.

To address the second part of your question, I don’t really have permanent favorite parts of anything I’ve written. I might find myself idly reflecting on this scene or that, or this paragraph or that, from time to time, with appreciation or odium, or I might like or dislike some parts as I re-read an earlier effort, but that’s pretty much the extent of it.

What was the relationship like with Leisure Books? Did they play much of a factor in each book, or request any changes? Did you receive any feedback from readers?

As far as my words went, I had text approval, and I tried to insure that it was honored.

As to feedback from readers, there was its share, and I think mainly more positive than negative. One fan offered several hundred dollars for the set of original Phoenix manuscripts. I never sold it, though.

Phoenix #5 ends on a cliffhanger, with Magnus Trench still searching for his family. Why did the series end with this volume? Have you considered wrapping it up with a final installment?

As I've said, I'd done an outline for what would have been a final story in which Trench and his family were (in some way, shape or form) reunited (probably with some wicked twist, such as wife and child having become contams by this point, or Luther Enoch or John Tallon appearing to do a "Luke, I am your father" number on Trench junior, etc.).

But as I may have also mentioned, I've from time to time over the years considered precisely that – ending the series in earnest. The most recent "Phoenix moment" was a few months ago when, on pondering the phenomenon of doomsday bunker building and the warped mentalities of survivalists who actually seem to relish the prospect of apocalyptic catastrophe striking the United States, I jotted down some notes for a story where Trench and a group of good guys pit themselves against the last of post-apocalypse America's bunker cities, and the bad-asses who are dug in there.

One of my biggest personal "Phoenix moments," by the way, took place on September 11th, 2001, when I happened to find myself caught in the vicinity of the World Trade Center when the two planes struck. Throughout the ensuing chaos, I recall saying to myself, "What is this? – ‘Dark Messiah East,’ chapter one?" or "What would Trench do at a time like this?"

I'll add that reflecting on Phoenix number five's (Reap the Whirlwind) subway scenes kept me from attempting to take the trains, which turned out to be a smart move on that dismal day. Should I have had thoughts like these on 911? I don't know. But think them I did.

One thing it does point up is the way a character, or group of characters, once created, can tend to powerfully and lastingly root themselves to an author's consciousness. It's a phenomenon that's been commented on by writers other than myself, too, I believe.

While writing Phoenix, I see you also worked on some other series. One of them was Z-Comm, also for Leisure Books, published under the name Kyle Maning. What’s the story behind that one?

I wanted to do a more contemporary action series, which is how Z-Comm got going. The title stood for Z-Command, a unit of last resorts that took on missions too impossible for anybody else, and which of course always brought home the bacon. I was told, though, that I had to provide a house name for the series byline, as for some unfathomable reason I couldn’t still be just plain old me.

Now, if this were today, I'd have taken out a laundry marker and scrawled “David Alexander” on the editor's desk by way of response, but in those days I suppose I was more … temperate. So I gave Leisure the byline "Kyle Manning."

Note that the surname, as might be expected, is spelled with two n's, not one. The reason the series' book covers bear the surname spelled with a single n was revealed to me when -- on one of my visits to the Leisure office, during which I was shown the cover of the first Z-Comm book -- I noticed that one of the n's was missing.

"It should be Manning, with two n's," I’d pointed out to the editor, who apparently had thought I might miss this disparity.

To this he replied, "Oh, we can't afford the AA (which stands for author's addition or author’s alteration, requiring a second run through the printing presses) so from now on your name is May-ning."

Once again, were it today, I would have carved that extra n into the editorial desk, but that was then, not now, and "Maning" it remained.


In the second part of the interview, Dave talks about his contributions to the C.A.D.S. series, his work with Gold Eagle, and his current projects – posting here next week!
Posted by Joe Kenney at 6:30 AM

I am ever in awe of your ability to acquire these interviews. Excellent work. For such crazy, over-the-top books, David seems like a pretty regular guy.

Joe, great interview. And your recommendation was spot on. I was able to find a copy of Phoenix: Dark Messiah. I’m only on page 52 and already…

SPOILERS
1. The President of the United States is assassinated by a suicide bomber.

2. A thermonuclear war is set off by powerful religious extremists.

4. A flashback occurs in which Trench beats down some street thugs to save his wife who rewards him with sex.

This is exactly what I was looking for in an over-the-top, fun action novel. Tip of my hat to Mr. Alexander.

Jack, thanks for the comment. You're correct, Dave definitely comes off as a regular guy. Almost hard to believe he can write such unhinged stuff. But then, I guess it's just further confirmation that this genre allows writers to unleash their wildest notions.

Mike, really glad you were able to get a copy of Dark Messiah. Yeah, the book starts off with a bang and just keeps going. I wonder if you've gotten yet to the infamous line: "The Pagan vomited up chunks of his stomach and flopped over backward, kicking his legs in the air as he shit his pants and died."

If anything I think volume 2 is actually MORE insane, not to mention it has a tacked-on finale which seems calculated to gross-out squeamish readers, where these Contams get loose in an underground city of hippies.

The Phoenix series is by far my favorite of all the series I've yet read. Another series I meant to recommend to you earlier is the TNT series, by Doug Masters, which I've also reviewed here...the protagonist is more of a straight man, so he isn't very sarcastic, but the whole series has a satiric, OTT edge. It comes a close second to the Phoenix series, in my opinion.