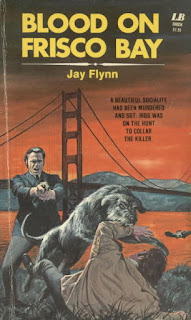 This was the first of two volumes Jay Flynn wrote for Leisure Books about San Francisco police sergeant Joe Rigg. According to Bill Pronzini’s excellent bio of Flynn, the novels were churned out during a low ebb in Flynn’s career, while the author was fueled on booze and bitterness. This is normally something I demand in my pulp fiction writers, but unfortunately I can see why Pronzini referred to the Rigg novels as the "worst.” While Blood On Frisco Bay starts off strong, it eventually loses its way and becomes a sort of padded and dull affair…indeed, the sort of thing you’d expect to be churned out by someone too drunk to notice or care.

Rigg is a tough cop very much in the mold of Nelson DeMille's Ryker, and it’s easy to believe that Leisure was starting up a whole new series based around the character. At this time Leisure (and parent company Belmont Tower) dropped both series titles and volume numbers from their series fiction, but for all intents Blood On Frisco Bay could be titled Joe Rigg #1.

Driving around in an unmarked station wagon (which is built on a Checker frame) with his “partner,” an 8-foot tall Irish Wolfhound named Croc, Rigg is in his late thirties and has no desire to move up in the police world. He doesn’t want to be a detective because he hates paperwork. He gets by on his wits and is friendly with the “harbor rats,” the whores, the smalltime drug dealing riffraff, the hippies and the junkies, in order that he can get things from them when he needs to. He carries around a Bowie knife, a 9mm Walther, and keeps an Uzi in his station wagon. Plus he lives on a “Trumpy,” an old gangster-era floating palace which he reminds everyone he bought at a vast discount and can barely afford to keep afloat.

A gorgeous young socialite is found strangled in a bar, and Rigg arrives while the scene is still hot. He chases after the culprit, a young Vietnamese woman, and within a few pages of the novel’s lurid opening Rigg is already calling in backup so he can storm into “The Muff,” a lesbian bar! Yes, there’s nothing like a mid-‘70s Leisure novel. The suspect, whom we later learn is named Francine, is hiding in the bar, and Flynn delivers one of the novel’s few action scenes as Rigg nearly gets hold of “the bitch” before he’s attacked by some cleaver-wielding cook; Rigg chops the man’s hand off with his Bowie knife.

Rigg becomes a sort of honorary detective, leading the case; the rest of the force is busy guarding the President-elect – referred to as “The Cowboy” – who happens to be in town. After some searching for Francine, including the questioning of her former employer, a millionaire named Keller who was married to the murdered young woman that started this whole thing, Rigg sort of gets involved in all sorts of unrelated stuff, most of it through coincidence.

For example, after stopping in a bar and meeting yet another of his lowlife friends, a truck driver, Rigg just happens to later see the guy’s truck driving down the road, and when Rigg can’t get him on the CB he figures something must be up. This develops into an endless sequence where Rigg trails after the stolen truck, which heads on down into California; eventually he learns that it’s hauling gold and that the truck is owned by one of Keller’s subsidiaries. Oh, and along the way Rigg also wastes a few hippie-terrorist bank robbers, who have absolutely nothing to do with anything.

His social life is just as frantic; Rigg has a casual sex thing with Annie Dale, a pretty young girl who cleans the boats on the harbor, and occasionally sleeps with Rigg. Then there’s also Tina Holmes, a high-dollar hooker who as you’ll expect is in love with Rigg; Tina, as part of her job duties, once “made it” with Francine and Keller’s now-dead wife while Keller himself watched on, so after Rigg is attacked in Tina’s apartment by hoods he figures he needs to put her away in a safe place.

So now Tina lives on Rigg’s boat, butting heads with Annie – not that this stops them from both doing Rigg at the same time. (A scene Flynn curiously leaves vague…but as for the other sex scenes, they’re pretty graphic, including one between Rigg and a super-horny Tina which includes the unforgettable line: “Not there, Joe! I want you in my ass!”)

But as the novel proceeds it loses its thrust, and comes off more as Rigg just sort of wandering around from one coincidental event to the next. Oddly enough the novel is fairly well written, and comes off as masterful when compared to the genre average. The dialog is good, the characters are fun, and the tone is strong; all of which makes the novel’s failings all the more pronounced. The entire middle half just spins its wheels, with Rigg chasing trucks, having sex with Annie and/or Tina, or even giving Annie love advice (she finds herself growing attracted to Tina and worries she might become a “les.” Rigg’s advice? “Give it a try!”).

The “plot” of the novel – Rigg trying to crack the Mrs. Keller murder case and catch Francine – is lost, and you keep wondering what happened to it. Especially when the climax really gets weird, with Rigg playing chaperone to the Cowboy. This is the most “coincedental” part yet, as Rigg and Tina drive by the President-Elect’s motorcade, and Rigg just happens to spot a dude who emerges from the crowd with a bazooka! Rigg takes out the guy with his car but one of the secret service cars is destroyed in the blast.

Somehow this entails the Cowboy coming to stay with Rigg on the Trumpy boat…and plus the guy already knows Tina, as he was another of her “clients.” Now we have long scenes of Rigg and the future President sitting around on the boat and shooting the shit, knocking back plentiful amounts of brandy. Eventually we learn that the would-be assassin was part of a hippie terrorist network (unrelated to the hippie terrorist bank robbers from earlier)…and in a very rushed denoument (Rigg is literally called while hanging out on the boat with the Cowboy and informed that Francine has finally been tracked down), we also learn that Francine herself is involved with the terrorists, and the murder of Mrs. Keller was all part of their scheme.

Flynn is sure to pack the novel with tons of lurid detail, just as we’d expect from a ‘75/’76 model Leisure book – a time when, it seems to me, the imprint got even more lurid. Francine, who unfortunately doesn’t have much “screen time,” is set up as one sick, sick woman, into the torture and s&m world, even making brutal films. This entails a sequence where Rigg watches an underground sadomasochism film in which Francine brutalizes an unfortunate woman (who turns out to be Mrs. Keller); Flynn writes up all sorts of harrowing stuff, going on and on, and ends the sequence with the in-joke punchline that Rigg always thought such things could only happen in bad novels by hack authors.

So while there’s a lot of explicit sex, there isn’t much action…Rigg as mentioned chops off a hand and shoots a few hoods, blowing off their heads in grisly detail, but otherwise he spends his time talking and drinking. As for his “partner,” Croc, Flynn carries out the goofy partnership pretty well, with most everyone terrified of the dog as soon as they see it, but Rigg always telling them he’s “harmless.”

The novel definitely captures that mid-‘70s “shag rug” sort of feel, and actually comes off a bit like the Shannon series, only less goofy. Don’t get me wrong, Blood On Frisco Bay is definitely goofy, but in a different way…the books are mostly alike in how they capture the decadent spirit of the era and feature protagonists who are more interested in screwing and drinking than solving crimes.

There was one more Rigg novel, Trouble Is My Business, which sounds even more lurid, about a “sex killer” who chops off heads with a knife. I’ll be getting to it eventually.
Posted by Joe Kenney at 6:30 AM