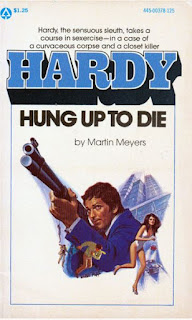 Hung Up To Die, by Martin Meyers
June, 1976  Popular Library

Grab your no-doze pills, kids, ‘cause it’s another installment of Hardy and we’re gonna need all the help we can get to stay awake! But you know to tell the truth, Hung Up To Die isn’t as soporific as the previous three volumes, I mean comparatively speaking. Martin Meyers at least tries to include a little sporadic action, so that the book isn’t just a list of what Hardy eats and watches on TV. There’s also a lot of “adult” action in the book – Hardy’s the “sensuous sleuth,” you know, at least per the covers – but as with the previous books it all pretty much occurs off-page.

The opening couple pages almost have you suspecting this one’s going to be more action packed than the previous ones; Hardy when we meet him is driving back into Manhattan after spending a couple weeks vacation in Maine. There he had a cabin by a lake and of course managed to hook up with some babe, and now he’s sad he had to end the summer romance with her…though Hardy does pretty well for himself in this book, so it’s not like he should feel too bad. For as he drives along he sees some hot young babe hitchiking, and he pulls over for her. She says her car’s in the shop and offers Hardy some primo grass back at her place. So they go back and smoke it, and just as they’re about to get into bed some guy busts in and tries to take out Hardy. But our hero, we’ll recall, has been trained hypnotically or something to go into immediate offense when attacked, even if he’s afraid. Hardy beats the shit out of the dude, chases him off, and figures the whole thing’s a honey trap – but goes in and does the still-eager girl, anyway!

Immediately upon his arrival in New York Hardy’s already hooked up with some other babe: Denise, a petite actress. She’s built up as the main female character in the novel before abruptly leaving; she gets a role in some play out in the sticks and says so long to Hardy, both of them knowing this will be goodbye for real. But meanwhile Hardy’s already checking out the babes at the physical rehab place he’s been sent to by his doctor. Hardy’s knee as ever is giving him trouble, and he’s been sent to a supposedly-gifted rehab doctor named Natasha, who runs a clinic in Manhattan. The place is staffed by hot gals, and Hardy can’t stop staring at busty blonde Faith or even bustier blonde Lane. We’re promptly informed that there’s only a single shower in the clinic, and it’s used by men and women. But since everyone’s afraid they’re going to be spotted in the nude, the only person who ever uses it is Lane – this incidental point of course merely setup for the sole murder that occurs in the novel.

I’ve mentioned in every previous review that Meyers’s writing style is incredibly similar to Len Levinson’s, and that’s true again here. This time though we get what would’ve been an in-joke if “Martin Meyers” really was just another of Len’s many pseudonyms: there’s a nebbish guy in the clinic named Butler. Nothing like Len’s Butler, of course, but a central character in the novel, and if I didn’t know Meyers was a real person I would’ve gone into one of my typical delusional speculations about the author’s true identity. Butler’s always lurking outside the shower stall, forever concerned he’s about to stumble across a half-nude female patient or employee. Hardy makes passing conversation with the guy, then one day after his latest appointment Hardy goes back to change, sees weird shut-in Butler lurking back there…and then discovers Lane’s corpse hanging in the shower.

Now clearly anyone with a modicum of intelligence would suspect Butler, who already gives off danger signals from his very first appearance. But Hardy doesn’t, and indeed will continue to conveniently overlook the mounting clues as the novel continues. And he’s supposedly a private eye! He’s too busy, really, worrying over his love life: he’s already managed to get Faith in bed (the girls at the clinic seem very willing to break the “rules” and go out with patients), but regardless he was also trying to determine how to “make” Lane as well. Now she’s dead, and Hardy’s hired by Natasha to find out who did it. She doesn’t seem as upset by the girl’s death as she is that the murder will cause her to lose business.

Really though, it’s Hardy’s relationship with Faith that takes up most of the narrative. She’s constantly coming over to his place for some all-night shenanigans, not much of which is actually described by Meyers, though he does get a tad more risque with this volume. Hardy slowly beings to realize he’s in love with her, and the book really takes on a Len Levinson vibe as it’s more about Hardy worried that Faith doesn’t love him back, and his going to comedic lengths to let her know he’s crazy about her. There’s also a return appearance by Steve Macker, Hardy’s actor friend who serves as his spy, but even he figures into the Faith subplot, with the two going out on a double date, Faith bringing along yet another girl from the clinic.

This one’s odd because Hardy just sort of stumbles onto the job, and really only solves anything through dumb luck. For once we don’t have interminable scenes of him scanning the paper for what old movie’s on that night, or going over his list of ingredients for his latest meal. To be sure, he does both of these things throughout Hung Up To Die, just not as much as in previous installments. He’s also hassled by the same cop from previous volumes, but these parts come off more like Meyers catering to his established formula; the cop adds nothing to the story, and as mentioned Lane’s killer is so glaringly obvious you wonder why the case is so hard for all these professionals to crack.

As ever Hardy puts Macker on field duty, following around Lane’s ex-boyfriend, who was acting suspiciously before and after Lane’s murder. Meanwhile Hardy frets that he’s fallen in love, and tries to convince Faith she loves him, too. She reveals she’s also seeing her agent, and thus being a wanna-be starlet she’s obviously swinging more toward this other guy – and there are some red herrings that he might’ve been involved with Lane’s death, too. When Faith casually reveals to Hardy one day at the clinic that she’s now engaged to the agent, the reader is more heartstricken than Hardy, for our hero has finally caught the ball and deduced who the murderer likely was, thus he’s only half paying attention to Faith’s devastating news. I kid you not when I say the majority of the narrative is concerned with his courting her, though.

Meyers does a good job of pulling all the various subplots together for the finale. There’s also a return appearance of Ruby Red, Hardy’s stripper galpal whom he enjoys a casual affair with – this dude does get lucky, that’s for sure. So really he doesn’t spend too much time pining for Faith, as Ruby arrives in town immediately after their breakup. Ruby also succeeds in making Faith jealous, as Faith reveals when Hardy heads over to Natasha’s clinic to confront the killer. This part actually features some action, but not from Hardy – Faith ends up punching someone out, a person who was in the act of training a gun on Hardy. A nice way of paying him back for breaking his heart.

And that’s it for this penultimate adventure of Hardy. Meyers clearly tries to play up on the “sensuous sleuth” angle this time; I would say at the expense of the action, but then there’s never been much action to begin with in this series. Perversely though this volume turned out to be my favorite yet, maybe because there were times that I could pretend it was some lost Len Levinson novel from the ‘70s.
Posted by Joe Kenney at 6:30 AM

Interesting. The cover signature is a bit fuzzy on that scan, but I'm pretty sure it's the signature of the great pulp mag, paperback and men's adventure magazine artist Walter Popp. I had not seen that one. Thanks! More Popp art here -> http://www.americanartarchives.com/popp.htm

Martin Meyers was a real person. With his wife Annette, he wrote a number of mystery novels as "Maan Meyers," including an interesting mystery series about the early days of New York City, from the 1600s (when it was New Amsterdam) to the end of the Nineteeth Century He died in 2014.

So are you saying the Butler did it?

Thanks for the comments, everyone! Bob, I can't really read the signature on the book itself, but it seems to be Popp. And JMS, that is exactly Hardy's line at the end of the book!

Hi Joe - I did some checking and determined that Walter Popp did indeed do the cover art for all five of the original paperback editions of the Hardy series. You can see some more cool examples of his artwork on my friend Thomas Clements' excellent American Art Archives site at this link -> http://www.americanartarchives.com/popp.htm