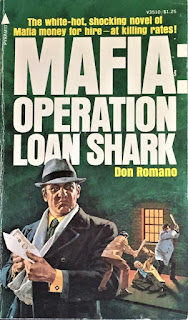 This was the last published volume of Mafia: Operation, and the second one to be written by Paul Eiden. His first was Operation: Hijack, published before Operation: Hit Man, but I haven’t read it yet. That’s no big deal, as there’s no continuity or recurring characters in this “series.” What’s important is that Eiden here delivers the sleazy crime novel we expect of him, featuring one of the most unlikable prick protagonists ever.

I really wasn’t looking forward to this volume. Loan sharking just didn’t sound like a compelling enough topic to dwell on for 190 pages of smallish print. Luckily Eiden isn’t as much interested in the mechanics of loan sharkery as he is in the sleazy vileness of his protagonist, a hulking mountain of muscle named Mickey Di Angelo. In many ways Operation: Loan Shark harkens back to the BCI Crime Paperback Eiden wrote for producer Lyle Kenyon Engel the year before, Crooked Cop (still one of my favorite novels I’ve ever reviewed on the blog). Just like the “hero” of that earlier novel, Mickey Di Angelo is a sadistic bastard who has gotten wealthy from crime and will do anything possible to get himself a bigger piece of the pie. To do so he’ll trample anyone in his path, even going as far as setting up elaborate murder triangles. Plus he enjoys forcing the occasional innocent young woman into prostitution.

The back cover has it that the plot concerns Mickey trying to wrest full control of his loan shark operations from his boss, Dominic Zinna, and in this effort Mickey retains a willing young woman to cater to Zinna’s depraved interests. Well, that’s sort of what happens…towards the very end of the novel. For the most part, Operation: Loan Shark is a slice-of-sleazy-life yarn more concerned with Mickey’s lurid daily activities, without the hassle of a plot getting in the way. In fact Zinna barely figures into anything; Mickey’s the true star of the show, and as mentioned he’s a major bastard.

Mickey’s more focused on his long-vanished father, a drunk who knocked up Mickey’s mom thirty-one years ago and only came around long enough to beat little Mickey around. In fact the bridge of Mickey’s nose lacks any cartilege because Mickey’s dad, in a drunken rage, smashed Mickey in the face with a broomstick. This happened when Mickey was ten years old. He mentions this often in the text and Eiden works in a nicely-done undercurrent of Daddy Issues which isn’t nearly as overdone and melodramatic as it would be in today’s cliche-ridden entertainment, while at the same time being a lot more over the top.

However Mickey disdains any sympathy and despises any sign of weakness in others. Very much like the protagonist of Crooked Cop he is the personification of the Nietzschean superman, unburdened by morals or emotions. His prime motivator is the accrual of power and wealth. He doesn’t even care about sex (a big difference from the Crooked Cop character), despite which he keeps no less than three women around Manhattan. The dude seems busy as hell in this regard, constantly shuttling around in his El Dorado to hook up with one or another of his mistresses: from Louise, the busty barmaid at one of Mickey’s legitimate establishments, to Joanne, a haughty doctorate student who gives Mickey a bit more lip than the others. Finally there’s Rosa, an Hispanic mother of three girls who serves more as Mickey’s accountant.

The female character who takes up the most of the text is Gerry St. John, a blonde actress who starts trailing Mickey around in the opening quarter of the novel, which introduces us to Mickey as he rushes around Manhattan on various business interests. One of Mickey’s concerns is a punk who owes money but can’t or won’t pay back, so Mickey’s already had one of his stooges, a muscular Sicilian named Grieco, break both his legs. Turns out Gerry is the punk’s brother and, after following Mickey around all night, hopes she can offer her body in exchange for her brother’s debt.

Mickey of course gets a good laugh out of this – he even laughs when Gerry reminds him that he had her brother’s legs broken – not that this stops him from screwing her. There are a few sex scenes throughout but nothing overly raunchy. But what’s crazier is that Mickey decides that Gerry can earn the money for her brother – by becoming a hooker! He drops her ass off at the whorehouse of a madame he knows and tells Gerry she can pay off the debt in no time on her back. Surprisingly Gerry’s game for it, realzing that if she can have sex with Mickey she can have sex with anyone.

There isn’t much in the way of gun-blazing action, though. Later in the novel Mickey’s almost gunned down by two would-be assassins, obvious heroin-addicts in grungy army fatigues, but he just ducks and covers and spends a few pages wondering who sent them before forgetting about the situation. He passes it off as one of the dangers of his profession. He also rubs out a “client” who has been unable to pay back his hefty loan. Mickey talks the guy, Corkell, into driving Mickey and another stooge into Central Park on some b.s. assignment, and Corkell agrees because he’s eager to do anything to get back in Mickey’s good graces. Mickey, in the backseat and casually giving driving directions, puts a gun to the back of Corkell’s head and blows him away. I found this scene reminiscent of the finale of The Friends Of Eddie Coyle.

Eiden saves most of the action for the super-sick climax. Zinna we’re told is a thorn in Mickey’s side, despite being the guy who set Mickey up as one of the prime loaners and collectors in Manhattan. The way the pyramid works is that a Mafia don retains Zinna, who himself retains a few loan sharks, one of them being Mickey. So while Mickey does all the work, Zinna gets ten percent of his profits, all while doing nothing but sitting around. This is what really grinds Mickey’s gears; that, and fifty year-old Zinna’ growing interests in very young girls. Early in the book Mickey encounters a husband-and-wife acrobat team, Carlos and Carmen, and Mickey comes up with the idea of using nubile Carmen in his plot against Zinna. She’s got the build of a young girl, and quickly proves to Mickey that she’ll do anything he asks if he pays her.

This plays out over the last quarter of the novel, with Eiden never informing us of Mickey’s plans. He hires Carmen as a secretary in the office of another of his legit firms and Carlos as a gofer, constantly sending him off on assignments. Mickey plays on Carmen’s obvious interest in him – she’ll do anything for the money and lifestyle Carlos can’t provide for her – and even rents an apartment in the city “just for them.” But Mickey always passes off on her offer of sex. Then he starts whoring her out to random guys, with Zinna being the top job. Mickey’s twisted plot is revealed in the final pages, and any hopes that he will find come kind of salvation or redemption are quickly dashed. This is one of the most shocking climaxes I’ve read in a while, with Mickey setting up an elaborate murder scene.

From the first page it’s evident what kind of ending Mickey himself is headed for; it’s almost a prefigure of Training Day, with Mickey becoming increasingly deranged and unhinged as the narrative proceeds. Longtime friends even start to turn on him, much to Mickey’s confusion; he can only learn things the hard way, and the only comeuppance he could ever receive would have to be fatal. The conclusion of the book’s almost as shocking as Mickey’s plot against Zinna, if for no other reason than how abruptly it happens – it seems clear Eiden was up on his word count.

Overall I enjoyed Operation: Loan Shark a lot more than I thought I would. Like the other three books in the series I’ve read it was a great example of sleazy ‘70s pulp crime. Maybe not as good as those other three volumes, but good enough. Eiden really keeps the narrative moving, with the first half almost coming off like a breathless rush, occuring over just a few days in Mickey’s harried life. I also appreciate how he delivers such a zero-morals bastard of a protagonist with little of the niceties or maudlin cliches of today. Eiden even finds the time to render chilling fates for minor characters.

As mentioned this was the last volume of Mafia: Operation, and I can only assume it was low sales that killed the series, as there was plenty of opportunity for more novels. I for one would’ve enjoyed reading something like Operation: Hooker. At any rate I’ve still got the third-published volume, Eiden’s Operation: Hijack, to look forward to. Here’s hoping it’s as entertaining as the others.
Posted by Joe Kenney at 6:30 AM

Out of curiosity, does Paul Eidens 'Leitmotif' appear in this one?

Great question, Graham! That peculiar "widely-separated breasts" line actually doesn't appear in the book, even though there were a few parts where I thought it was about to be employed. We know from Hawk's Authors's Pseudonyms that Eiden wrote this one, as well as those John Eagle Expeditor installments which did contain that recurring "breasts" line, so it was just my suspicion that it was Eiden's in-jokey calling card. Because that phrase appeared in "Crooked Cop" and "The Strangler," I assumed those were also by Eiden. But it appears my hunch that he used this phrase in all his books is incorrect. I'm hanging my head in shame...! Seriously though, thanks for the comment!

I'm finishing up Mafia: Operation Loan Shark this morning and checked out your review. It's perfect. You nailed what's great about this book. Thank you for the deep dive into what makes this book work.