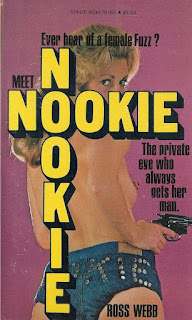 “Ross Webb” is none other than J.C. Conaway, who here serves up the first of what will be two volumes in the Nookie series, which is basically a prefigure of Conaway’s later Jana Blake series. Prefigure? Actually it’s the same exact thing, with only minor changes.

Conaway has already proven himself to be a master recycler, as seen with Deadlier Than The Male, which was a straight-up rewrite of his earlier Lady From L.U.S.T. contribution. By the same token, it would appear that Jana Blake was just the Nookie series, moved from Manor to Belmont-Tower, with the heroine changed from a brunette to a blonde. Otherwise the two series are identical and are both low-thrills, high-sleaze.

To wit, Italian-American Indian beauty Nakomis “Nookie” Narducci is a “well-stacked female dick.” She has straight black hair that flows past her shoulders but no other body hair to speak of; her “hairless femininity” will often be mentioned in the copious sex scenes, but none of her male consorts seem much surprised by it, which is strange given that this was written in the shaggy-hairy ‘70s. Just like Jana Blake, Nookie has an office in Greenwich Village, on West 60th and 9th Ave – and just like Jana Blake she’s up on the third floor. Whereas there’s a gay-frequented gym on the second floor of Jana’s building, Nookie’s has a gay-frequented “beauty school” on the second floor. And while Jana’s best friend is a pudgy gay interior designer named Charlie, Nookie’s best friend is a pudgy gay window decorator named Sydney who steals clothing for her.

More paralells: Jana Blake has a sort-of boyfriend named Gianni, an Italian hunk who runs a fruit stand; Nookie has a sort-of boyfriend named Pompie, an Italian hunk who runs a bar. As with Jana and Gianni, Nookie’s night with Pompie serves up the first of several XXX scenes in the novel. And just as Jana has a doting aunt – her only living relative – who often comes into the city to bring Jana presents and take her out to expensive dinners, so too does Nookie. Jana and Nookie even both end up boffing the police lieutenants who handle their first cases; for just as Deadlier Than The Male depicted Jana Blake’s first-ever case, so too does Meet Nookie depict Nookie’s.

The only difference between Nookie and Jana Blake, other than hair color and heritage, is that Nookie doesn’t have the sexism of Jana; as we’ll recall, Jana Blake only takes jobs for women and deals with “women’s issues.” Also, Nookie doesn’t sleep in her office like Jana does; Nookie’s apartment is on 56th street. And the only real difference between the series themselves is that, at least judging from this first volume, Nookie is much more focused on the sleaze, with several hardcore sex scenes throughout. Otherwise the two series are the same in that they are more along the lines of slow-moving mysteries than action yarns (like Jana, Nookie doesn’t even own a gun). Not to mention the interesting fact that each series only lasted two volumes, so the idea wasn’t exactly a hit despite the publisher.

As with Jana’s first case, Nookie’s has her looking into what appears to be a serial killer, one operating in the downbeaten Chesterfield Hotel on West 58th Street, within walking distance of Nookie’s apartment. Nookie is hired by former silent film star Violet Valady, who lives in her twilight years in the Chesterfield with her sister, who gets murdered in the first pages of the book. Violet complains that the cops aren’t moving on the case and so hires Nookie; our heroine’s first client, given that Nookie is usually discarded by potential clients when they discover that “Nakomis Narducci” is really a woman. Why Nookie even wants to be a private eye is something Conaway never reveals.

Nookie goes out with “unattractive homosexual” GBF Sidney Pomeroy and ends up going back to her apartment with Pompie, thus leading us into our first taste of sleaze. Here we learn that “Nookie’s body had an unusual feature…it was completely hairless.” Nookie will have sex the very next day, as part of her “interview” for the job of “chambermaid” at the Chesterfield. Her plan is to get this job to scout out the big hotel and find the killer. Having no qualms with screwing someone to get something, Nookie eagerly bangs Ray Lawrence, studly manager (and secret owner) of the Chesterfield. But Nookie’s just getting started, as that very night she’ll be double-teamed by a pair of medical interns.

As is typical with Conaway, Meet Nookie is more of an ensemble affiar, with Nookie competing with a variety of characters for narrative spotlight. On her first day on the job she meets all the many characters who live in the Chesterfield, each of whom could be the murderer. There’s Mavis, the foul-mouthed, heavyset black lady who also works as a chambermaid (Conaway serves up a string of gross-out jokes concerning Mavis’s attempts at “self pleasure” throughout the novel); Lottie Hess, the butch former roller derby champion who now serves as staff manager; and Jablonski –Smythe, the simpering gay front desk clerk. There’s also a bunch of residents, from a shut-in married couple to a Greek father and son who sell diamonds but who might really be into something more nefarious.

As mentioned Nookie gets familiar with two such residents on her first night: Monty and Hans, who insist on taking Nookie out to Chinatown, where they first hang out in the restaurant of Ming Toy, a “Chinese-Jewish lesbian” with a mouth nearly as foul as Mavis’s. She also declares she’s an old rival of Lottie Hess in a subplot Conaway doesn’t do anything with. But Conaway does again indulge in his interest in the underground world of homosexual bars and clubs – and such material has repeated in enough of Conaway’s books for me to go, “hmmmm.” This time Ming Toy takes Nookie and the two studs to a gay club built in an old church; there Nookie gets smashed, goes back to Monty and Hans’s room, smokes dope, and has sex with them – the third such hardcore scene in the novel – this time even swinging out of their window on draperies, Tarzan style, with Monty’s “cock inside her.”

Meanwhile the killer scores again, this time an old drunk of a lady who lives on a floor that Nookie doesn’t tend to. In another narrative miss, none of the murders occur on the floors Nookie is assigned, meaning Nookie is never the first person to discover any of the corpses. But it should be clear by now that Conaway isn’t interested in (or perhaps capable of) a standard mystery thriller with the standard developments. This second kill brings in Lt. Terry Ferguson, a handsome cop who learns Nookie is a private eye, but doesn’t instantly spurn her. Instead, he eagerly requests her help – and of course has sex with her that very night, though this sequence is bizarrely vague and almost included in hindsight.

Conaway tries, but there is no tension in the novel, even with a murderer operating in the hotel. There’s never a point where you fear for Nookie. This is likely because Conaway is so focused on other stuff, like the upcoming rodeo convention Ray Lawrence has booked in the Chesterfield, featuring famous rodeo star Pokey Barnes. This whole sequence, complete with the Chesterfield made up in Western décor, exists solely so Conaway can deliver a scene where Pokey gives Nookie a ride through Central Park on his horse – and screws her while they’re both sitting in the saddle.

When Violet Valady herself is killed, Nookie becomes even more determined to find the killer…this despite the fact that, you know, her source for payment has just been killed off. This doesn’t prevent her from more fantastic sex. While snooping in the apartment shared by the Allottas, Nookie is discovered by the father, who promptly begins feeling her up and screws her. Meanwhile Nookie’s discovered an unusual substance in the closet; we’re later informed it’s cocaine, and the father-son team have used their diamond business as a cover. Plus, Lottie Hess is arrested off-page for being their accomplice! This part is bizarrely underplayed, particularly given Lottie’s narrative importance prior to this. But she’s abruptly gone, and no longer a suspect so far as the murders go.

Conaway usually references old movies, in particular musicals and whatnot (“hmmmm” again), and Meet Nookie climaxes with a big “Hooray For Hollywood” costume party at the Chesterfield. With Sidney’s help, Nookie dresses up like silent film star Theda Bara in Cleopatra, practically revealing all in a scanty costume. But this is another narrative miss on Conaway’s part. Why not have her dress up like one of the characters played by silent film star Violet Valady, as a tribute to the dead lady who hired her? Not that much is done with the costume party; we’re only informed what a few of the characters are wearing, anyway, though Conaway does get more comedy mileage out of simpering gay Jablonski-Smythe, who shows up in drag.

The “mystery” is abruptly wrapped up in the last few pages. Skip this paragraph and the next if you don’t want to know. But when Nookie sees Jablonski-Smythe in drag, she instantly knows he’s the killer. Nookie makes the sudden deduction that J-S’s costuming ability allowed him to disguise himself as his victims; a vague subplot has it that some of the victims were seen after the M.E. had ruled they were dead, which of course puzzles the cops. The novel’s sole action scene occurs when Nookie knocks out Jablonski-Smythe with a karate chop, but then Nookie herself is almost strangled – by Ray Lawrence, who turns out to have been behind the entire scheme as part of a plot to sell the hotel for a big price.

Our author is so unconcerned with tension and payoff that he has Nookie unconscious while all the heavy lifting goes down. She wakes up, having been saved by Lt. Ferguson from Lawrence’s strangling hands; the lieutenant, who has been disguised in costume at the ball all along, followed after Nookie and got to her just in time. He casually reveals Ray Lawrence’s plot and has him and Jablonski-Smythe arrested. Meanwhile Nookie wants to go home and screw – and that’s it, folks.

Messily plotted, with paper-thin characters that don’t go much beyond caricatures, Meet Nookie is more of a sleaze yarn, with a lame “murder mystery” plot forced on it. I can’t say I hated it, though. Conaway has an easy style and his material is so goofy you can’t help but keep reading. There’s some weird-o stuff throughout, like the bizarre off-hand revelation that Ray Lawrence’s ex-wife moved to some small town and started hitting on random guys in sleazy bars, taking them home and calling them “Ray.” Conaway also makes humorous attempts at investing a “literary” vibe to his prose, such as, “[Nookie’s voice] reminded him of burning leaves in a forest painted by autumn.” Mull on that one.

Nookie returned for one more adventure in that same year’s Get Nookie, which I’ll get to eventually.
Posted by Joe Kenney at 6:30 AM

Somehow, I missed this on the shelves at Rusine's....

Sadly, in those days, if there was a trans character, they would usually be the killer. Thirty or forty years before that it was the gay character. It’s part of every minority’s journey, from villain to comic relief to being treated like a person.