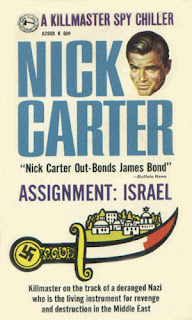 I had low expectations for this volume of Nick Carter: Killmaster, another one by Manning Lee Stokes – not due to Stokes, as I always find something enjoyable about his books – but because the plot didn’t much grab me, about the Killmaster staving off a potential Middle East war, one that Israel would falsely be blamed for starting. I like the more fantastical Killmaster plots, and this one appeared to be more on the mundane level, a la other Stokes joints like Mission To Venice.

And while that’s true, it turned out that Assignment: Isreal was very entertaining, and moved at a fast clip, particularly when compared to Stokes’s other series entries. In other words, there’s very little of the padding and stalling one finds in the typical Stokes work, and for once he even provides a good villain for our hero: Gunter Gerhardt, infamous “Butcher” of WWII, a Nazi soldier who was known as “the German T. E. Lawrence” due to his skills in desert warfare.

Gerhardt, or “G.G.” as he’s constantly referred to, is now William Lucy, a British mercenary who works around the Middle East. His current plot has him coming up with a mission for Syria: he will take a group of Syrian soldiers, dress them in Israeli Army uniforms, slip across the border to Jordan, and massacre a village, leaving behind the corpses of a few Israeli “soldiers” – in reality, Israelis G.G. killed in an earlier raid and put in uniforms to leave as decoys. To test his mettle and see if there’s still any “thrill” in killing, G.G. himself guns down those captured Israelis, including women and kids, shocking even the bloodthirsty Syrian troops under his command. The ultimate goal is a Middle Eastern war, one funded by China, G.G.’s secret backer.

As usual, Nick Carter’s on vacation when we meet him, shacking up with an old flame named Peg in a ski resort in Gstaad, Switzerland. Stokes doesn’t go full-bore with the explicit detail, but we get enough to know these two are having a grand old time. Then Nick discovers a tape hidden beneath the bed and kicks himself for losing his skills and not detecting it. He sends Peg off and lies in wait for whoever placed it. It turns out to be the fat old cleaning woman, who was paid to do it by two East Germans; also, she put the tape there before Nick’s arrival, as the Germans were interested in Peg, whose husband is a noted industrialist.

Nick confronts the two German agents in a tense scene that occurs on the snowswept mountain in the dead of night. Unfortunately, the entire sequence is arbitrary and has nothing to do with the book’s plot. However Nick looks upon his easy killing of the two agents as “good practice!” Then boss David Hawk summons him to AXE HQ in DC, where Nick is appraised of a situation that involves the CIA and Israel’s Shin Bet. They’ve gotten wind of “G.G.’s” plot via overly-complicated backstory, and Nick’s to head to Tangier, where he will be reporting to a Shin Bet agent – and Hawk warns Nick it’s a woman, which of course makes Nick bridle.

In Tangier Nick meets his new boss, a ravishing brunette named Sabra. She’s capable and deadly, and even gifted with disguise talents, able to transform herself into a jawdropping blonde. But Nick deems her a “talented amateur,” as she does not have the cool efficiency of a professional. She tells Nick that she is “married to Israel,” and this to Nick is the true mark of the non-professional, as she’s become a spy for patriotic reasons. Also Sabra insists Nick forget any dreams of bedding her – maybe “after” the assignment, but not before.

Together they head to Israel, where Nick is promptly captured and tied up by a KGB duo, Gregoff and Yashmin. Shin Bet’s biggest fear is that the Russians will find Gerhardt before they do – he killed just as many Slavs as Jews and thus is equally wanted by the Russians – and these two are prepared to literally rake the coals over Nick to find out what he knows. But while Gregor, whom Nick has realized is insane and ready to snap at a moment’s notice, is down stoking the fire, Yashmin slips over and begins to “stroke” Nick. That’s just the way things roll in a Manning Lee Stokes novel, and I for one am not complaining – these kinds of books should be outrageous and exploitative.

This is a brutal sequence, with Nick pinioning the girl between his thighs and smashing her face apart. The fight with Gregor is even more brutal, as Nick, unarmed and his hands still tied, desperately tries to evade the madman’s gun. It climaxes with Nick pulling a Van Damme and launching a savate kick with both legs, breaking the bastard’s neck. He even thinks of all this as more “good practice!” From here the action moves to the desert, where Sabra has retained the services of a band of Bedouin mercenaries.

I’ve always been interested in that whole desert warrior aesthetic, from the Bedouins to the Tuaregs, and Stokes nicely captures the atmosphere. These desert warriors will be the sole army in the fight against Gerhart’s Syrian troops, across the border, but Sabra’s certain not a single one of them is trustworthy. Speaking of Sabra, she and Nick finally get it on, out in the cheap showiness of the desert one night: “Sabra wrapped her slim legs about [Nick], locked her heels high on his back and sought to devour him.” Yeah!!

Things get real when one of the Bedouins does turn traitor, and Gerhardt sends over a Syrian plane to bomb the hell out of them. Stokes is grim in the ensuing massacre, with nightmarish descriptions of dead women and children. The Bedouins are mad with rage, and Nick turns into a veritable Alexander the Great, marshalling them into a bloodthirsty force of vengeance. By this point Sabra has already turned over command of the assignment to Nick; it began, as expected, when she gave herself to him in the desert.

Nick goes on and on about a “plan” he has that might be suicidal, but he (or Stokes) never tells us what it is – instead they luck out when they sack a mop-up convoy and steal a military half-track and lots of machine guns. Here Nick is pure Killmaster, dropping down silently onto the half-track as it drives by and slicing and dicing with Hugo, his stiletto. The climax plays out on Gerhardt’s headquarters in the desert, known as “the Ravine of the Devil,” a “cross between a moonscape and the floor of hell.” Stokes suitably brings the hellish place to life, with descriptions of spooky lava formations jutting from the desert ground.

Meanwhile Sabra has declared to Nick that she loves him. Pop quiz, folks: What do you think happens to Sabra?? This actually serves to add an unexpected dramatic depth to the finale, as after a pitched battle on the Ravine of the Devil, Gerhardt escapes up a mountain, Nick in close pursuit, with no escape possible for “the Butcher.” But he’s under good cover, avoiding Nick’s steady fire. He only comes out when someone poses as a decoy for him. Guess who? And Stokes ends the tale here, abruptly but effectively, with the impassable Killmaster for once affected on an emotional level.

This was a good installment of Nick Carter: Killmaster; nothing phenomenal, but consistently entertaining and well written. Stokes is still my favorite writer on this series, and he especially shines in these earlier volumes.
Posted by Joe Kenney at 6:30 AM