The ABC Affair (aka The Adjusters #2) 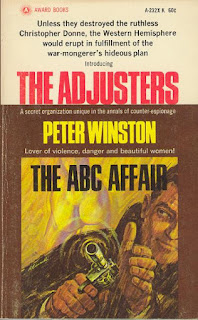 Hawks’s Author’s Pseudonyms credits this second Adjusters volume to Paul Eiden, but I’m pretty sure it’s not actually by him. This doesn’t appear to be the same author who wrote the first volume; whereas that one was clearly by Eiden, The ABC Affair suffers from pedestrian writing, a naïve protagonist who displays none of the alpha male virility of Eiden’s take on the character, and most importantly the author of this book ignores/is unaware of things stated in that previous volume.

Reportedly The Adjusters was the work of three authors: Paul Eiden, Jim Bowser, and Jack Laflin, who published the fifth and final volume of the series under his own name. I’m unfamiliar with Bowser but I’m wondering if, instead of volumes three and four, as Hawk’s has it, he actually wrote volumes two and four, trading off with Paul Eiden. For I’m 99% sure that The ABC Affair is not the work of Eiden – if it is, he must’ve written it damn fast and damn drunk. Most tellingly, that “widely-separated breasts” line Eiden uses in each of his books does not appear in this novel, so what more proof do we need?

So if I’m correct, then The ABC Affair was actually written by Jim Bowser, and if so, I’ve gotta say I’m not impressed with his work. He possesses a clunky style along the lines of Dan Streib, Ralph Hayes, and Paul Hofrichter. He also turns in a pretty tepid story, one that doesn’t take advantage of the series concept and could just be a novelization of some random TV detective show. The Adjusters as we’ll recall is the secret wing of the Edgar White Whittle corporation, referred to annoyingly as “EWW” throughout. The author of this book has a lot more Adjusters than Eiden did; in this book, there appear to be Adjusters all over the globe, their numerical designations all A-something.

Hero Peter Winston is A-2, and this time there isn’t any vagueness about Edgar Whittle’s involvement with the Adjusters wing; he’s the top boss who gives the orders. Winston still mostly reports to Vandervelle, the Dispatcher. Not appearing but mentioned this time is another Adjuster, Tucker Priest, and I’m pretty certain it was “Tinker Priest” last time – perhaps another indication of different authorship. At any rate, while Priest served as a Q-type last time, this time that function is handled by an Adjuster named Joe Sergeant.

The plot is pretty low-key. The titular “ABC” refers to the first names of the leaders of Argentina, Mexico, and Brazil, who will be attending a Western Hemisphere Conference in Chicago. A guy named Christopher Donne, who poses as a messenger of peace but really finances left-leaning revolutions and riots around the world, has abducted these three men to prevent their appearance at the conference, so as to ruin the whole affair, which would suit his plans for sowing leftist chaos in South America.

The novel is written in such a mundane, almost juvenile tone that Donne is constantly referred to as “Christopher” in the narrative. For that matter, the violence is bloodless, and the sex is strictly off-page. But “Christopher” has apparently captured these three South American leaders, and Vandervelle tasks Peter with freeing them – this after our hero has been jumped by several of Donne’s men in the opening pages. Peter uses his karate skills and a sonic noise maker hidden in his wallet to free himself, then successfully bullies the attractive young woman who “rescues” him into some sex.

Endlessly throughout the book Peter wonders what’s going on, what might happen, what did happen, and so on. We get our first taste of this as Peter questions the true motives of this young lady, Dori Ballinger, for pages and pages. She’s been hired by Donne, but might be innocent of any evil intentions. Or might not be. But she’s supposed to keep Peter distracted in bed – and Peter’s determined she’s going to do her job fully, second-thoughts or not. He basically insists she sleep with him, though as mentioned our author keeps it off page.

Another indication that this is a different author than the first one is when Vandervelle gives Peter his assignment, noting that Donne’s hot young wife, Princess Toria, is here in New York. “I’ve never met a real princess,” Peter says – but meanwhile he not only met but had sex with a princess in Assignment To Bahrein. Oh well. Anyway Princess Toria, despite much buildup, is only in a page or two of the book; rather, the author (and Peter) focuses on her assistant, Cheri Collins, whom Peter thinks is the most beautiful woman he’s ever seen (he thinks the same thing of another woman later in the book, by the way).

Cheri is the second somewhat-reluctant woman Peter hassles into sex; she wants to escape Donne, whom she refers to as a monster, and Peter begs her to come to Chicago with him to help root out the sadist. He promises her he won’t touch her, even though they’ll be sharing a motel room bed, etc. It appears this author watched a couple of the Connery James Bond movies and kept the playful sexual hassling of Connery’s 007 but failed to capture the “playful” part. Peter comes off more like a desperate-to-get-laid fifteen year old. But Cheri ends up loving it and stays with Peter for the duration, though the author doesn’t do much with her; in fact, this is the first such book I’ve read in which the female character actually realizes she’s “useless” and begins to sulk!

Action is sporadic. Peter and Cheri drive to Chicago in Peter’s Ferrari, and they’re chased by a private plane; Peter succeeds in shooting it down but his own car is destroyed. In Chicago, Peter answers a call from the elusive Donne…and accepts his offer to come over to Donne’s hotel. This entire scene is so absurd I couldn’t believe it. Donne and his henchman get the drop on Peter, who bullshits them into letting him play “a form of Russian roulette” for the slim chance of escape.

Putting one bullet in a .357’s chamber, Peter tells them the idea is he’ll spin the chamber, pull the trigger, and if he makes it five times out of six he can go. Donne is a sadist so he’s into it, but he insists Peter won’t leave here alive, no matter what. And then Peter goes and spins the gun and puts it to his head and pulls the trigger! Five times!! I thought he might’ve had some ulterior motive here, like a gadget hidden in the handle of the gun or somesuch (Peter uses a lot of gadgets in this one, by the way), but nope – his “plan” is exactly as promised. He hopes to literally dodge the bullet!

As mentioned, Peter Winston is pretty naïve this time around. Even Donne refers to him as a “hopeless amateur.” Even though Peter manages to escape and knocks Donne out, he leaves the supervillain alone, so that Donne too makes his own escape. Instead Peter grills a few of Donne’s henchmen, who wait back in his hotel room with a captive Cheri Collins; Peter turns the tables on them and interrogates them with a cigarette pack-sized recorder Joe Sergeant has made for him, splicing the words into a message he uses to fake out yet more of Donne’s men.

The final quarter takes place in DC, where it develops “the ABC men” are being held in a society house. Donne has ingratiated himself with the gullible movers and shakers in the jet-setting society of wealthy peace-proclaimers, chief among them uber-babe Monica Macdougal – yet another woman Peter thinks is “the most beautiful” he’s ever seen. Cheri, still with Peter, can read the signs, and knows that Peter’s moved on, and thus is desperate to prove her worth to him.

Peter scores with his third and final woman; this would be Monica, while the two are hiding in the locked-off second floor of her mother’s house. From here we proceed directly into our “action” finale, in which it develops that the ABC guys, who’ve been off-page the entire book (and stay that way), are really decoys – the real ones are safely with Edgar White Whittle. Peter leads a team of Adjusters in gas masks on an attack on the society house in which the decoys are kept, and then turns the house upside down trying to find a now-captive Cheri, Donne, and Wallach, Donne’s henchman.

As a final slap to the face, the author doesn’t even deliver the villains their comeuppance, with Peter arresting Donne and Wallach on the final page, leaving their fates to the courts. What the hell?? But as I say Peter Winston seems to be an entirely different dude this time around, as he’s courtesy an entirely different writer...at least that’s what I think. Here’s hoping the next volume is indeed by Paul Eiden, or at least a better writer.  Love the blatant nude ass on the cover, though!
Posted by Joe Kenney at 6:30 AM