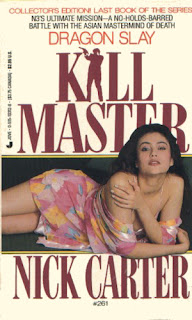 If you’ve ever woken up in a cold sweat, gasping, “How – how did  Nick Carter: Killmaster come to an end?”, then wonder no more, because this is that final volume and I’ve read it. But anyone hoping for a fitting conclusion to the 261-volume saga will be unsatisfied; indeed, it appears very clear that Dragon Slay was not even intended as any sort of series wrap-up by writer Jack Canon, who had turned in so many previous installments. Clearly what happened was that Jove decided to cancel the series and this volume was the last one they had in the pipeline, so by default it became the last volume.

But at this point, 16 years after series creator Lyle Kenyon Engel had left (and 4 years after he’d died), Nick Carter: Killmaster was a completely different thing. Particularly in Canon’s hands, as he’d refashioned it into a sub-Robert Ludlum thing, with a Nick Carter who lacked all of the likable qualities of the original model. Indeed, Canon’s Carter is a bit of an ass, constantly telling people how “bad” he is and going back on his word; even the way he’s referred to – “Carter” instead of the “Nick” of the volumes from the 1960s – is indication that we are dealing with a different dude.

For that matter, the original template of the series is gone. Carter’s boss David Hawk doesn’t appear in Dragon Slay and isn’t even mentioned. In fact, neither is Carter’s organization of AXE – I’m not sure, but I think the same was true in the other Canon novels I’ve read (just speaking of the third-person volumes he wrote in the ‘80s; it appears that his first-person volumes from the ‘70s hewed more closely to the original series template). But Carter is already on assignment when we meet him, having been summoned to Hong Kong by a series of apparently-planned events.

The pulp fun of the early books is long gone. This is sub-Ludlum all the way. Canon’s Carter exists in a world of shadowy spooks and paid informants. What little pulpy stuff there is, like this installment’s main villain, is either unexplored or quickly dealt with. What I’m trying to say is, it’s boring. Fairly good writing, and good dialog, but boring. Hell, the “Killmaster” doesn’t even kill anyone until page 114, and his assortment of gadgets is nowhere to be found. Even the pulpy names once given to his standard weapons are gone…his Luger is just that, no longer “Wilhelmina,” and his stiletto is no longer “Hugo.” All the pulpy spark of the original books has been sucked out, leaving us a dry-as-dust, bland espionage tale that has nothing to differentiate it from countless others. No wonder the series was canceled.

The plot has Carter being drafted by Chinese intelligence, as for hard-to-buy reasons they want a non-Chinese agent to help figure out who has been sabotaging Chinese interests lately. Actually they already know who it is – Dr. Chiang Sim, a hardcore anti-Communist who lives on an island off Taiwan. One of the greatest misses of the novel, Dr. Sim is a Dr. No-type villain who has his own army of henchmen and runs his affairs from a converted monastery, watching his various activities unravel via a bank of monitors in his control room – and Canon, per his usual, does absolutely zilch to exploit his own pulpy concept. In fact, Sim doesn’t even damn appear until page 187, of a 195-page book!!

Rather, Canon is more into wasting the reader’s time with Carter hopscotching around Hong Kong, trying to get clues on Sim and his plans. He doesn’t even have much time for the series-mandated sex; Carter’s been drafted by Lu Ty Yong, Chinese Intelligence chief (who gives Carter the codename “Dragon Slayer”), and Yong places his lovely daughter Myang as Carter’s minder. She is a spy agent in her own right, and throws herself at Carter early on; surprisingly, Carter denies her. Only later do they have a somewhat-graphic sex scene, Myang again offering herself to Carter during a moonlight swim in the nude, “her high, round breasts demanding to be fondled.”

Canon also pulls a fast one on readers; there’s actually a supporting character of sorts in Dragon Slay: Christie Greer, a hostuff blonde mega-babe who is a reporter based out of San Francisco. She’s also mega-skilled in kung-fu, almost a match for the Killmaster himself. She’s on a story that has her racing from SanFran’s Chinatown to Hong Kong, researching an apparent Chinese plot to flood the US with heroin – yet another of Sim’s ploys, of course, and one which attempts to frame Lu Ty Yong’s son as a drug dealer.

The reader endures these scenes with Christie, constantly reminded of her hot bod and great looks, knowing from the previous 260 volumes that it will only be a matter of time until she and Carter meet…after which the inevitable will occur…only it doesn’t!! Believe it or not, folks, but Carter and Christie do not engage in the series-mandatory boff! She becomes his comrade in Taiwan, zipping around town on a Honda cycle, in tight black leather and a visored helmet (a la Uma Thurman in the first Kill Bill), and she kicks plentiful Sim henchman ass, but she drops out of the climax, only to return in the final pages; in exchange for scuppering her story, Carter promises to take Christie out to dinner in restaurants around the world.

As mentioned most of the narrative is boring stuff about Carter hunting clues on Sim. The above-mentioned first kill is when a professional hitman attempts to get the jump on Carter, which takes us into an overlong fight in which this guy almost gets the better of the Killmaster. In the ‘60s books “Nick” would’ve taken down without breaking a sweat. But that’s really it on the action front, until the narrative moves to Taipei, and Carter and Christie become a two-person task force, wiping out various Sim installations.

In a bit of clumsy plotting, though, Christie is abruptly yanked out of the action, so that Carter and Myang team up for the assault on Sim’s fortified island – as if Carter always needs a woman with him while on the job. Anyway they suit up in scuba gear and infiltrate the place, taking out some guards silently and moving in on the converted monastery that is Sim’s lair. And we’ve only got like a dozen pages left in the book. This complete unexploitation of the pulpiness reminded me very much of a previous Canon misfire, Blood Raid. That one too suffered from inordinate padding, while serving up a hasty and absolutely pulpy (anti)climax.

So how does the series end? Unspectacularly, again proving out that Dragon Slay was just another contract job and Canon did not write it under the impression that it would be the series finale. After Carter and Myang storm the island – Sim almost perfunctorily dealt with – Carter as mentioned offers Christie a series of dinners around the world, as repayment for keeping her from publishing this bombshell of a story. And that’s it! No saynora from David Hawk, no “they lived happily ever after” for Nick and Christie, no nothing – just another random adventure in the life of Nick Carter.

Overlong, listless, more focused on real-world mundanities than the pulp thrills the series was once known for, Dragon Slay is an ignoble end for the Nick Carter: Killmaster saga. But then, it’s becoming more apparent to me that the true ending of the series was when Lyle Kenyon Engel left it, in 1974.
Posted by Joe Kenney at 6:30 AM

None of the later books are that good. I got a stack from Half Price a few months ago and started with the newer ones, with the girls on the covers, and they're all, well, meh. They all try very hard to be "serious spy novels" but in the process they forgot to include anything interesting. Carter as a character isn't interesting, either. Certainly he's no Mack Bolan.

Based on your last comment, I may have to track down some pre-74 Carters to see the difference.

I like a lot the covers with photos of girls. The best were the French editions of the novels of Gerard de Villiers, the king of the French spy-pulp. You should read them, they are very good, violent and sexy.