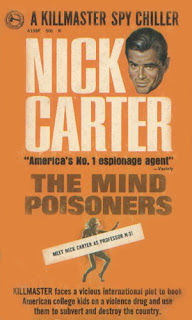 Hardboiled author Lionel White, who specialized in heist thrillers like Steal Big, turned in this installment of Nick Carter: Killmaster, which, per Will Murray’s essential article in The Armchair Decetive (volume 15, number 4, 1982), veered so far from the series formula that editor Lyle Kenyon Engel had to get Valerie Moolman to rewrite vast portions of it, a task which she had apparently also performed for the first volume.

I don’t think Moolman’s presence is as strong here as it was in Run, Spy, Run, as The Mind Poisoners retains the feel of Steal Big and, more pointedly, Spykill, which White also published in 1966 under a pseudonym. Like that novel, The Mind Poisoners starts off like a spy story but soon feels more like your standard hardboiled private eye yarn, with hero Nick Carter trying to bust up a heroin operation operating out of Las Vegas and Los Angeles, even getting roughed up by a dirty cop at one point.

The central conceit of this one is “Professor Nick Carter,” a goofy idea with admitedly limited humor value; globe-trotting, villain-killing, babe-laying Nick Carter as a philosophy teacher at Berkley. But White really doesn’t exploit the idea, with only two sequences of “Professor Nick” in action, one of them comprised solely of his apologizing to his class, the other a summarized account of a day’s instruction and how engaged the students are. But this is the main plot synopsized on the back cover – that college kids around the US are going nuts due to a “violence drug” and AXE suspects it’s yet another Chicom plot.

Nick as usual is called out of bed with his latest mate: Chelsea Chase, a stacked mega-babe with a singing career or somesuch. White has it that these two are an on-again, off-again item, but doubtless this is the first and only time Ms. Chase will ever be mentioned in the series. Hawk, who has come here to Los Angeles where Nick’s vacationing, tells his chief agent that “this might be the most important assignment any AXEman ever had.” (To which Nick retorts, “Aren’t they all?”) Hawk relays to Nick what we readers already witnessed in the opening chapter, a hopscotching-situations affair, written in an annoying sort of omniscient tone, with rioting students, protests turned violent, and even a beloved Berkley professor with former pinko proclivities gunned down while on his way to the FBI to blab about something.

Nick is to pose as the replacement for the murdered professor, his cover name being Professor Jason Haig. Off he goes to Berkley, his backstory carefully arranged by AXE, but first he breaks into the warehouse of “Orient Export-Import,” a SanFran company whose business card the murdered professor had in his pocket when he was gunned down. Already the book feels more Gold Medal hardboiled than ‘60s spy-fy as Nick breaks into the place, snoops around, and gets in a brief firefight with the guard – Nick’s even armed with a .38 here, a gun we’re informed he seldom uses, but which is of course mandatory for most hardboiled private dicks.

“Professor Haig” makes his debut to a classroom of surly, disinterested kids; Nick appeals to them to accept him and other humdrum maudlin stuff. Then he goes home and gets laid by one of them – Nick by the way figuring he might get some college-gal nookie the very moment Hawk handed him the assignment. This is Blossom Twin, an “utterly striking girl” who is “part Chinese,” with glorious breasts and a “chiseled coral mouth.” She comes on strong to a suspicious Nick, who does her anyway in a sequence that is only marginally explicit: “They lurched together, gasping, exulting in the tumult that they shared.”

Unsurprisingly, it’s a setup, and some dudes come in and get the jump (so to speak) on Nick while he’s in the act. This is just the first time our hero is knocked out in the course of the novel. Nick’s caught by a couple “Orientals,” who plan to strap him into “the Persuader,” a literal ball-crusher. But he attempts to fight his way out, only to be knocked unconscious again, drugged this time. This occurs on page 72.

The next page is a curious thing. Suddenly Nick’s talking to an Israeli woman who says her name is “Sabra.” Initially I thought White was going for a weird psychedelic thing, with a drugged Nick hallucinating the girl. But damned if it all didn’t read just like Manning Lee Stokes. Then I looked at the top of the page, and saw that it was titled “Assignment: Israel!” Award pulled a blunder, at least in this printing, and accidentally inserted a page of a different Killmaster installment, one that was indeed by Stokes.

On page 75 we’re back to The Mind Poisoners, and Nick finds himself in the offices of kindly Dr. Twin, Blossom’s dad, a Chinatown doc who claims to know everything that goes on around here, says he saved Nick at Blossom’s behest, and pleads with Nick not to get into this any further. Nick sort of comes off dumb throughout, as Blossom is clearly working with the heroin-producers – and we get verification in the occasional scenes with her and her Chicom masters, plotting Nick’s death – yet Nick keeps trusting her. Or is he just using her all along?

We don’t get much “Professor Nick,” but we do get “Beatnik Nick” in a humorous sequence which has Nick in black beret and sweater, spraying himself with “essence of Cannabis Indica” and venturing into the Beatnik joint in which Blossom meets her heroin supplier. Nick catches the guy, Pio, and here we have an early stab at the dreaded F-bomb when Pio, threatened with torture, tells Nick “F– you,” which would indicate that the word “fuck” was too extreme for the genre at this time. But then, there’s seldom any cursing at all in these early Killmaster novels.

The last quarter gets onto that hardboiled kick with Nick posing as “Jimmy the Horse,” a mobbed-up dealer. He drives to Vegas in an AXE-provided silver Lamborghini, tracking the heroin pipeline. His cover is nearly blown by Chelsea Chase, who just happens to be singing at the Tumbleweed casino, which is owned by one of the main heroin dealers. Here we have lots of Gold Medal-esque stuff, from a fake deal in which Nick is caught – and knocked out again – to the dirty cop who attempts to beat him up.

White huries through the various action scenes, like when Nick tears onto the ranch of the heroin supplier, tossing grenades from a special compartment of his Lamborghini. At this point the Chicom plot is pretty much forgotten and it’s just Nick versus various underworld lowlifes, which is the same narrative progression as demonstrated in Spykill. The finale has Blossom finally blabbing to Nick her role in the plot, which has been the creation of this new violence drug to subvert American youth – and she’s suddenly very evil, taunting Nick with his imminent death and wanting one last role in the hay beforehand.

Believe it or not, Nick is knocked out yet again, and here he’s drowned in the offal of the sewers beneath the Oriental Export-Import Building(!). But Nick as we know can hold his breath a very long time, and anticlimactically dispenses every single one of the villains (all of them conveniently assembled in one room) with little Pierre, the “gas bomb” Nick keeps hidden on his person at all times.

There was nothing really bad about The Mind Poisoners, but it just didn’t feel like a Killmaster novel to me. Also White’s version of Nick Carter is a little too prone to making mistakes, not to mention getting knocked out. There is a sort of unfinished, hurried feel to the novel, and I suppose it’s just as well that Lionel White never delivered another manuscript for the series.
Posted by Joe Kenney at 6:30 AM