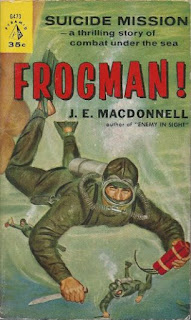 A few years before he wrote the Mark Hood series, Australian author J.E. Macdonnell turned out this World War II paperback, no doubt sourced from his own memories of serving in the Navy. Frogman! is written a bit differently than the later Mark Hood books, with Macdonnell delivering a mostly standard story that focuses on the so-called “frogmen” of the war.

First though let’s take a moment to appreciate the awesome cover art, courtesy veteran men’s adventure magazine artist Mel Crair. It’s super cool and all, but you have to love how the frogman’s holding a stick of dynamite with a fuse…under the water. I think I once saw Wile E. Coyote try the same thing. It’s likely Crair did this as a joke, but at any rate it’s pretty funny. The cover’s still pretty great, though.

I remember being fascinated as a kid by the frogmen, probably due to their wetsuits and gear – as a kid I was obsessed with costumed superheroes and masks and whatnot. Surprisingly though, it doesn’t look like very many novels were written about the frogmen, or at least I personally have been able to only find a few of them. In fact it seems that so few were written that Pyramid Books, which published a ton of WWII paperbacks, had to import this one from Australia. It’s a slim book, too, coming in at 143 pages of smallish print.

Those hoping for a pulpy, action-packed read will be a little disappointed. Like Women’s Battalion, Frogman! is another WWII paperback that doesn’t retain the puly, sensationalistic feel of the men’s adventure mags of the day. Macdonnell plays it straight throughout, giving us a realistic story that’s made up of about 80% training and only 20% action. The novel takes place in the Pacific front of the war and its protagonists are all members of the Australian Navy, which is locked in combat with “the Japs.” The year is not stated, but it would appear to be at the height of the war.

Our hero is Petty Officer Clive Gellatly, a former boxer who has been in the Navy for about ten years. Gellatly is a “pom-pom” operator on a destroyer ship, and chomps at the bit for more athletic duty, despite his skill at the heavy gun. As for that “pom-pom” bit, part of the problem the reader of Frogman! must surmount is that Macdonnell has peppered the novel with 1940s Australian Navy slang that will be meaningless to Americans. I mean I felt like I was reading A Clockwork Orange at times, encountering nonsensical phrases like “jack-me-hearty’s” (apparently a derogatory term for pompous officials) and, my favorite of them all, “You’re acting like a sheila with her first matelot.”

Gellatly responds to a request for able seamen interested in frogman duties. “Suicide squad,” Gellatly figures, and quickly signs up. He’s taken to a remote oceanside area where he will train with another four men for the next few months. His teammates are Corby, a musclebound dude nicknamed “Blubberguts;” the monosyllabic Bill Smith, who is such a forgettable character that he doesn’t even get a nickname; “Bluey” Taplin, a redhead with lots of freckles; and finally “Whitey,” an Aborigine pearl diver. Macdonnell has a subplot where Gellatly wonders if Corby resents Whitey due to his race, but this comes and goes, and besides Corby launches to Whitey’s defense during the infrequent barroom brawls the team gets in.

In fact it takes a good 50 pages until we even get to the frogman stuff. Macdonnell introduces the readers and Gellatly himself to the team during an overlong sequence in which they hit a bunch of bars. Along the way Gellatly hooks up with a brunette bombshell named Rita, even having sex with her in a park – a fade to black scene, but humorously enough the part of the book Pyramid chose to spotlight in the first-page preview of this edition. Gellatly’s casual affair with Rita ultimately leads to the novel’s first big action sequence, a brawl in which the team takes on her former paramour and his colleagues.

But the frogman stuff is what we’re here for. The team’s trainer, Henley, teaches them all the rudiments of diving and working their air beneath the waves, along with how to keep their ears from rupturing and etc. Macdonnell doesn’t bore the reader with tedious, endless details. He capably brings to life Gellatly’s own joy with deep diving, something he’s never done before, with our hero broken in to his new life with on-the-job learning like recovering lost watches and other items from the sea floor. Eventually the team is also taught how to plant mines on enemy ships, growing into a strong, capable unit along the way.

Around page 100 the team’s given its first mission; Gellatly, as senior officer, is in charge. Taken to New Guinea, Gellatly’s frogman team boards the Wind Rode, Gellatly’s former destroyer. Their mission is to venture to Mortie Island in the Halmaheras, the location of a “big Jap base,” one that features a powerful radar station. Gellatly’s team is to blow up the radar base so that bombers can’t be called in to stave off the impending Allied invasion. We get our first aquatic action scene when Whitey suits up in his frogman gear and goes beneath the Wind Rode, encountering two “Jap frogmen,” killing both of them with his knife.

This proves to be the action highlight. While Gellatly puts a submachine gun in a plastic bag for the nighttime swim to the island, he never uses it; he uses a knife to take out a sleeping sentry and the team slips into the radar station, setting it to blow. There is no big action setpiece in Frogman!; instead the team escapes, safely in the water when the station blows up, but Corby is injured by the shock waves from depth charges dropped by a pursuing boat – repercussions for his refusal to wear a jersey beneath his wetsuit, something Henley always advised for this very reason.

Corby lives, though, and indeed the finale is a payoff on the simmering Corby/Whitey rivalry. Given that Whitey risked his neck to save Corby, the Aborigine is rightly pissed that Corby caused the whole issue by disobeying orders and not wearing a jersey. Corby swallows his pride and apologizes, and that’s that; the novel ends with the success of this first mission of Gellatly’s team. It makes one wish that there was a bit more action in the book, as it is more gripping than the training and barroom brawling.

There is nothing exploitative about Frogman!; the two sex scenes with Rita are instant fades to black, and the action scenes are not gory. As for language, anything stronger than “hell” is bowdlerized, with dialog like “- -!” appearing the text. (I enjoyed coming up with my own outrageous profanity to fill in the blanks.) About the only thing readers would find off-putting today is the constant usage of “Japs,” even on the back cover, but then that’s part and parcel of these old WWII paperbacks, and any veteran reader of vintage pulp will be immune to it.

It’s short, breezily written, perhaps a bit too confusing in its Australian dialog, and maybe too focused on training at the expense of action, but Frogman! is in the end pretty enjoyable…though I have a feeling there has to be a better frogman-focused war paperback out there.

Now stop acting like a sheila with her first matelot!!
Posted by Joe Kenney at 6:30 AM

Hmm... after getting addicted to watching old Sea Hunt episodes (buying the DVDs of that is well worth it), I may have to seek this one out...

A "pom-pom", by the by, was a multi-barreled 40mm antiaircraft weapon developed by the British in the interwar era ("pom-pom" is the sound it made when firing). It was very common on British battleships and cruisers (and all Australian cruisers in WWII were built by the British to British designs), though less effective than the later 40mm Bofors gun, which had a higher muzzle velocity and longer range.