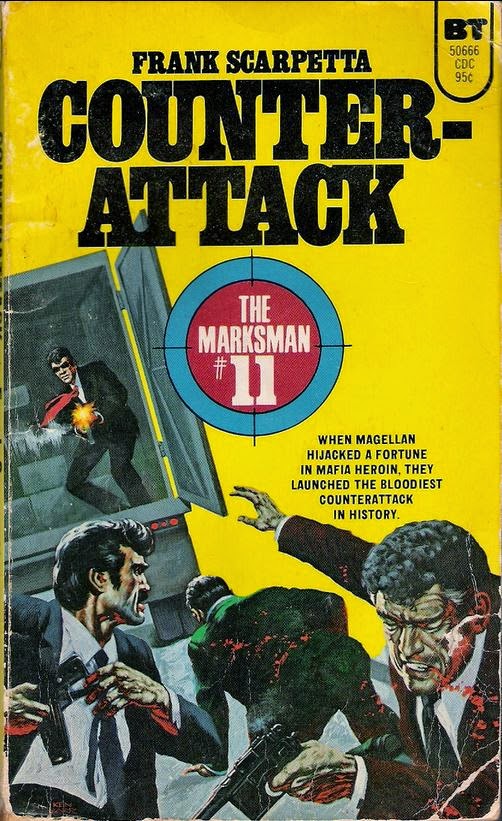 The Marksman series presents us with more mystery and confusion, as this Russell Smith volume clearly takes place after his last installment, #9: Body Count, yet we appear to have missed something in the interim. And as usual, the questions behind the book are more interesting than its actual contents.

Body Count ended with Philip Magellan on the French Riviera, where he’d collared a heroin dealer named Dante Monza. The tenth volume was by co-writer Peter McCurtin and had nothing to do with the France adventures. Now in this volume, which is clearly by Smith himself, Magellan’s in New Orleans, and it appears he’s just returned to the States from Monaco. But none of the stuff from the previous Smith volumes, like Monza or the Paris-based mobsters Magellan had been fighting since #8: Stone Killer, are mentioned.

In other words, it seems like we’re missing a Smith installment. I’m wondering if McCurtin’s novel was accidentally published as the tenth volume, when it should’ve been Smith’s. Or maybe Smith missed his deadline and never turned in his manuscript? Perhaps it’s one that will turn up later in the series, churned out by a publisher who couldn’t give a damn about series continuity. One thing I won’t guess is that Smith’s manuscript might’ve been too rough to see print; Belmont Tower obviously had no qualms with publishing anything, regardless of quality. This particular novel is just yet more proof of that.

Russell Smith had to have been approaching burnout state by this point, having turned in so many manuscripts in such a short time. His haphazard “plotting” and hamfisted storytelling are especially rough this time, with even less attempt than usual at telling a coherent tale. These books in their own way are almost as bad as the later Tracker series – not that bad, and true they have a bizarre charm about them, but that they are so obviously cranked out without any authorial care is apparent, which thus serves to incur the reader’s anger.

Even basic things one would want from this genre are missing. There are hardly any action scenes, and not even any sex. There is no suspense or mystery, no buildup and playing out of tension. There are no moments of character introspection or depth. There isn’t even the barest attempt at characterization, in fact, with an assortment of figures shuffled across the page in a desperate attempt at reaching a word count.

Anyway, what’s the book about? Well, Magellan’s in New Orleans. Apparently back in Monaco he met some nameless guy at a yachting club(??) and the two struck up a friendship, and this dude apparently kept telling Magellan about the Mafia in New Orleans and how the dude himself was a double agent, working for both Interpol and the Mafia. Smith frequently cuts back to this stuff in Monaco, so it would appear this character, whom we eventually learn is named Robert Choisi, is not a returning character from an unpublished Smith manuscript.

But Magellan’s apparently followed this dude’s advice and come to New Orleans because a big shipment of heroin’s on the way. Magellan ends up acquiring it -- $650 million worth, a number we’re constantly reminded of in the text – and thus sets off a sort of inter-family war among Don Benito Borghese and his Interpol/New Orleans police chief associate, Inspector JM Baffrey, who despite being British is apparently the top cop in New Orleans. Also we get lots of stuff about how the heroin was “stolen,” and the cops set up this fake marijuana bust to appease the public, but then Magellan figures out the heroin was in fact handed over to Borghese…but Magellan ends up getting it, anyway.

There isn’t even any of the wild and wacky stuff with Magellan capturing people and drugging them, though he does often dress in the “hippie” disguise he’s been using since Smith’s first installment, #1: Vendetta. Magellan himself goes without an accomplice this time – during a brief meeting with Baffrey he states “I’m always alone” – but later in the novel he meets up with Choisi and the two reconnect, finally learning each other’s names. One thing I want to make clear is that this is all so rushed and so half-assedly described that as I’m writing this review I’m trying to make sense of the novel I just read.

Smith fills more pages with Borghese dealing with what he assumes are traitors. As usual, no one realizes that the Marksman is in town and is the cause of everyone’s misfortune. Smith also introduces elements that he doesn’t bother following up on, like how Borghese is secretly a heroin addict but only one other person knows about it. There are also some misses, like Borghese’s top capo, who is greatly built up, only to be unceremoniously dropped from the narrative.

The weirdness of previous Smith installments returns when Magellan escapes a trap and steals at random a VW Bus. Inside he finds the bound and unconscious form of a half-naked young woman. He does the expected thing – takes her back to his cabin in the woods, fully strips her, checks her out, then puts her clothes back on! At great length we learn this is Chantal Choisi, daughter of Robert, who had been kidnapped by Borghese’s men, as now the don and JM Baffrey are trying to track down Robert Choisi and the missing heroin.

Per usual Magellan doesn’t put any moves on the girl – the guy’s as sexless as a Terminator – even though she seems to eagerly expect she’s about to get raped when she comes out of her drugged slumber. Instead, Magellan reunites her with her dad, who meanwhile is trying to evade the Mafia and the cops. Smith introduces another lazy, unexplained plot with Chantal switching places with her sister, so as to fool Magellan, but why? What was the point? It’s not explained, but Magellan does hit both father and daughter and then runs away.

Magellan then collects the heroin and ships it “air freight” to New York. That taken care of, he overhears the two Choisi sisters talking, and learns that they’re also apparently cops or something, or at least were trying to help their dad, who himself is really on Magellan’s side, so Magellan lets them live. Then we get the typical rushed Smith finale where Magellan arms himself with some “Japanese grenades” and lobs them into a room where Borghese and Baffrey are meeting. The end!

Honesty, Counterattack was a hot mess, cranked out by an obviously-exhausted author who was likely hopped up on goofballs. It wasn’t an enjoyable read at all, and it’ll take me a while to recover enough from it that I can move on to another volume of this grubby series.

Oh yeah, this novel did prove out another of my stupid theories – namely, that the heroin “Johnny Rock” got “from the score in New Orleans” is not only indication that The Sharpshooter #6: Muzzle Blast was also another Smith manuscript that got turned into a Sharpshooter novel, but also that it takes place sometime after Counterattack.  Curiously, it was published the same month and year as Counterattack -- more indication that Smith was a human typewriter, just cranking out the books.
Posted by Joe Kenney at 6:30 AM

Any bio on the odd Russell Smith? It is a difficult search because both Russell and Smith are common names, and he is a pre-internet writer. If you had a biographical note in one of your earlier posts, I seem to have missed it.

Russell, unfortunately there is no bio, nor any information. It looks like the guy was prolific, though, as the name is attached to everything from old sleaze paperbacks to more standard paperback originals.

In my article the other year for The Paperback Fanatic, on the connections between the Sharpshooter and the Marksman, I surmised that "Russell Smith" might have been a pseudonym of an author named George Harmon Smith, who apparently has claimed to have written some of the Marksman books. But since no volumes have ever been matched to GH Smith, I assumed "Russell" might have been a pseudonym he used.

However, Lynn Munroe wrote in to the PF to state that he had actuall met Russell Smith in the '70s, so it would appear he was in fact a real dude -- so the mystery continues.

Interesting. Weird how somebody with their name on so many books can have so little information on them. I think the problem here is that having two common names means that it is too easy to get false hits.