Adrano For Hire #1: The Corsican Cross 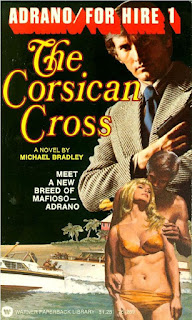 This is the first of four volumes about Johnny Adrano, a 29 year-old mobster with a Harvard education who wants to carve out his own piece of the criminal underworld. It would appear that author Gary Blumberg (aka “Michael Bradley”) was trying to go for a Richard Stark/Parker sort of thing here, serving up a protagonist who is in no way a hero. Indeed, Adrano’s gambit in The Corsican Cross is to kidnap a heroin manufacturer, play one don against another, “and come out of the action in control of a juicy one-third of the heroin trade!”

Adrano is in fact a pretty unlikable protagonist. One problem I had with this book is that Adrano’s impetus is based solely upon arrogance. There’s no revenge story here, or anything else which would engender reader sympathy; Adrano merely believes that, due to his good looks and heavy education, he deserves to be at the top of the New York mafia chain, and so he decides to break out on his own and screw everyone. But the biggest miss here is that Adrano’s Harvard education was funded by those very same NYC mobsters he now looks to con! (In a barely-described backstory, we learn that Adrano, an orphan, was raised by a mobster who put him through college, but the mobster later died, so that now Adrano has no one in “the Family” who looks out for him.)

However Adrano himself takes forever to appear in this slim, 174-page novel. Like Marc Olden’s Narc books, The Corsican Cross is more of an ensemble piece, author Blumberg juggling a huge cast of underworld figures, with our protagonist sometimes lost in the fray. Also I should mention here that Blumberg is an irredeemable POV-hopper; I mean, we switch perspectives from one paragraph to the next, and this makes for a bumpy read when you consider how many characters are on display. Seriously, just give us a line break or something! Instead we go from say a mobster’s perspective straight into Adrano’s, and then into someone else’s, all in the space of three paragraphs, and all this does is confuse the reader and pull him out of the reading experience.

Anyway, at first we have to get through a lot of backstory about the dog-eat-dog world of New York-area mobsters in 1971 (the specific date in which The Corsican Cross occurs). Long story short, a don named Sam Benucci in the “redneck” woodlands of New Jersey has enjoyed the full US distribution control of the 90% pure heroin imported from Jean Paoli, a Corsican who lives in Marseilles, France. Now the dons in New York have combined to take this way from Benucci; leading them is Don Tirizzi, the most powerful mafioso in NYC.

Johnny Adranno is a low-tier “button man” in Tirizzi’s family; we learn that Adrano “made his bones” when he was still a teen, and due to his Ivy League education, his lawyer status, and his general ego, he believes that he should serve as Tirizzi’s consigliere, not Mike Sicardo…aka the brother of the guy who raised Adrano and put him through school. Adrano hatches a scheme; he approaches Benucci and tells him that, in exchange for funding the caper and cutting him in on the eventual profits, Adrano will go to France, kidnap Leon Di Bianci (the Corsican who manufactures that pure heroin and is also the best of friends with Paoli), and bring him back to the States before Tirizzi’s goons can go over there and work a deal with Paoli. The Corsican’s monopoly depends wholly upon Di Bianci’s manufactured heroin.

So begins a caper that reminded me a little of the Mission: Impossible TV series (which is actually referred to in passing in the narrative: Adrano scoffs at a “stupid spy show on TV” where the heroes easily infiltrate a gang and con them). Adrano makes use of disguises and cunning to pull a caper on Paoli, Di Bianci, and Tirizzi, posing as “Joseph Abel,” a French-speaking American seller of antiquarian books. To this end The Corsican Cross is heavier on suspense than action, though it does have an appropriately action-filled climax.

Blumberg, like Olden, seems to get the most enjoyment in writing about his villains (a meaningless term here, given that every character is a criminal). Paoli takes center stage, coming off like a heroic man among men; he fought in the Resistance and now lives in splendor with his young mistress Suzanne, chronically worrying over the failing health of his best friend Di Bianci, who despite not being a heroin user is gradually dying due to breathing the vapors as he creates the drug. That these men are selling the heroin to mobsters who then disperse it to junkies across the States, thus ruining lives and society, is something that Paoli never once considers – indeed, he envies Tirizzi and his fellow visiting mobsters over the fact that he has such avid customers in America.

The novel is more in the “trash fiction” category than men’s adventure. Again I’d say the closest comparison would be the Parker novels, only with a Godfather overlay. Blumberg ably captures the posh life of Paoli, who like Di Bianci is a compulsive collector of antiquarian books (hence Adrano’s scheme). Whereas Di Bianci is at death’s door, Paoli has the health of a younger man, and thus we get a few scenes of him dallying with Suzanne (nothing too explicit). Meanwhile Blumberg takes his time building up the characters and narrative, with Adrano posing as Joseph Abel on the flight to Paris (where he manages to pick up a French stewardess and score with her that very night; has anything like this happened to anyone outside of characters in trash fiction??). He slowly infiltrates Di Bianci’s world, claiming to have 16th century copies of Dante for sale.

Paoli and Di Bianci take an instant liking to Joseph Abel, and Paoli invites him to stay at his villa; Blumberg increases the suspense factor here by having Tirizzi and Mike Sicardo visiting at the same time. Now Adrano is afraid that his ruse might be uncovered by both parties. Blumberg also increases the sleaze angle with an arbitrary sequence in which Suzanne is raped by Marcel, a Frenchman in charge of Paoli’s heroin distribution; the way Paoli deals with Marcel is suitably gruesome (though not described), but the whole incident does nothing to forward the plot. When everything does comes to a broil, it’s all through a fluke, as Di Bianci gets sick at dinner and Adrano/Abel offers to drive him home!

Blumberg delivers a taut action scene as Adrano, exposed thanks to a dropped contact lens, escapes on a yacht with both Di Bianci and Suzanne as hostages, Sicardo and other Tirizzi goons in pursuit. Adrano proves handy with pistol and rifle, even taking on a helicopter. The action is nothing too over the top, even on the emotional front; when Adrano has the inevitable confrontation with Sicardo, it’s over in a flash and Adrano has no compunction over blowing away the brother of the man who raised him. But then, Adrano is pretty despicable throughout, arrogant to a fault, disrespectful to everyone, concerned only with himself and making money. Thus when he gets back to New York and it turns out Benucci planned to double cross him all along, the reader fills little of the concern Blumberg intends.

I figure it will be hard going dealing with this same self-centered protagonist for another three volumes, but Blumberg’s writing is compelling enough to keep the reader engaged. It looks like ensuing installments all follow this caper angle, with Adrano using his gift for disguise and foreign languages to further swindle the mob. Blumberg also ends The Coriscan Cross on an interesting, unexpected note, with Jean Paoli so impressed with Adrano’s con that he offers him a job! Whether or not Adrano accepts is something Blumberg leaves a mystery, but I’m assuming we’ll find out next time.
Posted by Joe Kenney at 6:30 AM

I found this for cheap I can't even remember where. I just finished it. Your review is not inaccurate, but I found it a bit critical. Maybe it is my fading middle-aged brain, but I quite enjoyed reading this book. I thought the whole set up was kind of fun and the characters never boring (though often exaggerated or cliched). I totally agree with you about switching the PoV. I swear at one point it happened within a paragraph.

This book was also relatively high-brow in the way it was marketed. I don't think Warner Books was used to the numbered series market and it felt a bit half-assed, too soft to be really trashily enjoyable but not good enough to be a "real" novel.

Olman, thanks a lot for the comment. You are correct, I do come off as a bit too critical in this review. The strange thing is, I've thought about this book a few times since reading it last year, so obviously it made more of an impact on me -- in fact, I keep meaning to move on to the second volume. And I think you perfectly summed it up, too soft to be really trashy and not good enough to be a "real" novel. Perfect description!