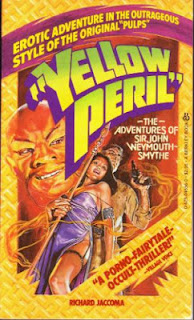 I’m not sure how I discovered this obscure book, but I’m glad I did. It has all the makings of a trash fiction masterwork, only it’s a bit hamstrung by the author’s agenda. Perhaps this is what undermined the book’s success. Regardless though I’m surprised Yellow Peril is so unknown, as it has practically everything one could want from trash fiction, including a great sense of humor. It also very clearly foreshadows Raiders of the Lost Ark in that it’s about a globetrotting adventurer in the pre-WWII years. Unlike Indiana Jones, though, our hero Sir John Weymouth-Smythe has tons of sex and kills a bunch of people along the way.

Smythe also serves as our narrator, and Jaccoma has a sure handle on the prissy tones expected of an Edwardian-era British adventurer. Smythe is pompous and as expected racist, though this latter element is part of the author agenda I referred to above. In a preface that amounts to character assassination, Jaccoma, speaking as himself, claims that Smythe’s manuscript was recently found and apologizes for the man’s racist diatribes. You see my friends, Jaccoma plainly states that Smythe is a bastard and that we should hate him for all of the racist ideals he stands for; even the jacket copy of the original hardcover edition intimates that Smythe is a prick and that we should root against him. But Jaccoma’s biggest failing is that he makes Smythe such a character to root for…I mean, Smythe spends the entire novel reacting to the horrors he witnesses, and he reacts much the same way as anyone else would. Jaccoma never gives the guy a chance.

To be sure, the author agenda doesn’t really show up until well into the tale. Before we get there (and even for the most part afterward) Yellow Peril is a very enjoyable read. (And it’s only this annoying agenda that has kept me from placing it in the Hall of Fame!) Anyway it’s 1932 or thereabouts and John Weymouth-Smythe is an agent of the British Empire; he currently resides in Thailand, where he’s been investigating the growing concern over “the yellow peril,” ie an Asia-wide revolt.

Meanwhile Smythe experiences love at first sight when he meets the half-Chinese daughter of his crusty British superior officer; the lady is named Beth-li, and Jaccoma lets us know what kind of gloriously trashy read we’re in for when he writes an explicit sex scene between the two shortly after they meet. This only proves to be the first of many such scenes; a recurring joke is that any time an attractive lady is introduced to the narrative, Smythe will have (elaborately detailed) sex with her. In a way then the book is like the Flashman series, only better, in that it incorporates mysticism and supernatural elements, even verging into full-on fantasy with an appearance of several Yetis, late in the tale.

Jaccoma also has a talent for sadistic scenes, something he also proves early on; Smythe stumbles upon the fact that a mysterious “Chinaman” with apparently supernatural powers is behind the Yellow Menace: Chou en Shu, who is of course Fu Manchu in all but name. As Smythe watches in horror he sees his world fall apart during a bizarre, Chou en Shu-headed ritual in which both Smythe’s superior and Beth-li are involved, the latter in a very personal way. This scene as well is a glimpse of more to come, as the rituals used by Chou throughout are heavily sex-based. Also here Jaccoma displays his James Robert Baker-esque gift for dark comedy, starting out a paragraph that has us thinking it’s going one way, only to suddenly have it go another, as Beth-li is raped by a massively-endowed Chou en Shu:

After a few moments, her cries had subsided. For Chou en Shu had inched the worst portion of his member into her. He paused in his onslaught now, and Beth-li, her grimacing face half crushed against the pillows, whined softly. Then, with a sudden sadistic twitch, he plunged the entire length of his flesh-rod deep inside her! Her entire body stiffened with shock and she let out one long and blood-curdling shriek…a shriek which went on and on, but which finally ended with the revolting, half-coherent words:

“More… Give me more! Oh, GOD!!” And my beloved Beth-li collapsed, gasping and shuddering…in a climax of the most disgusting intensity!

Smythe’s life further spirals into chaos, as his superior commits suicide and then, most shocking of all, Smythe receives Beth-li’s severed head in a package sent by Chou en Shu! Of course, this means that Smythe (and we readers) now hate Chou and want to see him get his comeuppance…which makes Jaccoma’s later “revelations” about what’s “really” going on and who are the “real” villains so misguided, not to mention so stupid. When a guy sees his “true love” get raped by a demonic being who later mails the dude the girl’s severed head…well honestly, how in the hell are we supposed to root against the poor guy??

Despite this nonsense, I should repeat that Jaccoma (unintentionally?) makes us so root for Smythe that we can, for the most part, overlook the later reveals and enjoy the book as a porn-fueled tribute to ‘30s pulp. Swearing vengeance upon Chou, Smythe has further adventures in Thailand, not to mention more sex, this being another Asian gal who throws herself at him, only to later reveal she is a vassal of Chou’s. Eventually Smythe moves on to India, where Jaccoma well captures the twilight era of the British Empire. Here Smythe meets with his new superior, Sir Denis, a man who is waging his own secret war upon Chou en Shu and thus recruits Smythe for the cause.

Denis sends Smythe into the Assam region of India, an arduous river journey where, on the well-appointed crusie ship, Smythe meets his new associates: Nazis! In these pre-war years Sir Denis has ties with the National Socialist Party, whose fascist and white power views he much appreciates. (Yet Smythe very clearly does not agree with the Nazis, and in fact hates them…yet, again, we’re supposed to hate the guy??) Another feather in the book’s trash fiction cap is that one of the Nazis is an actual Nazi She-Devil! This is “blonde German goddess” Clara Schicksal, who co-leads the group of Germans alongside her brother Julius. These two are straight out of The Occult Roots of Nazism, as Smythe stumbles into their cabin while they’re indulging in one of their rituals:

I should mention that the “young lad’s” throat has just been slit. These Nazis are here to track down the infamous Spear of Destiny, which Smythe actually held in his hands back in Thailand; an old acquaintance happened to have acquired it, as related in a long but entertaining story. However again due to supernatural chicanery, Chou en Shu has now gotten hold of the Spear. This is something Sir Denis and the Nazis want to correct – they claim that a supervillain like Chou will destroy the world with such a powerful relic. Thus, Sir Denis has chosen to work with the Nazis – “the enemy of my enemy is my friend,” and all that.

The occultic Nazi stuff soon fades into the woodwork, as does the Nazi She-Devil herself; after such a memorable opening Smythe hates Clara, not that this stops him from the occasional hate fuck. (I’d quote one of these sequences as well, but they might be too much, given that Smythe will only sodomize Clara, and brutally so...and yeah, she loves it…) However the supernatural stuff comes to the fore as the group engages the aid of an Indian mystic who is at war with Chou en Shu; this entails a raid on a remote Assam temple in which those aforementioned Yetis appear, they too serving the Nazi cause in the battle against Chou.

But towards the end it all begins to unravel, mostly because here Jaccoma belies his intentions. Various characters previously thought dead return, and all of them are not only willing servants of Chou en Shu, but they keep banging Smythe over the head about how “stupid” he’s been! Most belligerent of all is a rabbi in New York City who takes special delight in telling Smythe how much of an “idiot” he is. But again it all just comes off as so stupid and misguided, because throughout the novel Smythe has just been reacting to the horrible things he’s seen. And the “racist” claims are also stupid, because throughout Smythe has gone out of his way to fight against his Nazi “allies,” even killing one of them and snarling, “Here – a gift from the Jews,” as he slits the murdering bastard’s throat.

Jaccoma plunges on, though, destroying not only the entire novel but also any further enjoyment, as he relishes in trotting out various characters who tell Smythe how stupid he’s been and all the mistakes he’s made. Let me ask you, though…if you saw the love of your life ritually raped and then received her severed head in the mail, would you pause and ask yourself: “Wait a second. Am I getting the full story, here??”

Because this is exactly what is implied…that the events of the novel have mostly been Smythe’s “fault,” mainly due to his “racism” and his inability to see the “truth” behind things. In other words, Jaccoma attempts to pull the narrative carpet out from under us in what he hopes is a shocking reveal but instead comes off like, well…like one of the dumbest damn things I’ve ever read.

And it really is a shame, because for the most part Yellow Peril is one hell of an entertaining and enjoyable read.

By the way, the hardcover edition features a photo of Jaccoma; is it just me, or does this guy look like a 1970s version of Robert from Everybody Loves Raymond?? 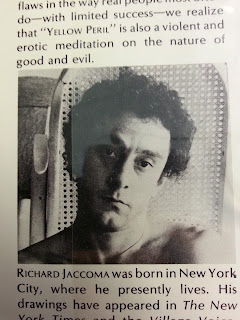 I bought this book new, had it for years, never got around to reading it.

He wrote another one, THE WEREWOLF'S TALE, that's also pretty wild.

This one has it all!

Wow, it kinda blows my mind that stuff like this actually got published (and in hardcover no less). Not just the racism or sex or violence (although it is kinda amazing how much is never too much...), but as you indicate, it's all thrown in this blender, and then topped off with just a really terrible finale that undermines the author's own work all the way up to that point.

I'm sure it's a dumb thing to say, but where was a half-competent editor or reader who might have said "Geez, you kinda botched the finish here, buddy"?

Thanks everyone for the comments.

Jack, my assumption is Jaccoma's agent and/or editor were fully behind it...this book was published right when Dead White Male-bashing was coming into vogue. Also the PC era was on the horizon -- it was in the '70s that the racist dialog was removed from the 1932 film "The Mask of Fu Manchu." And they didn't just edit it out, they cut the footage from the master print and destroyed it. (The material was added back in a few decades later, using footage from 16mm prints.) Anyway, the authorial angle of "Yellow Peril" comes from that same mindset...Jaccoma's failing however is that he didn't make his protagonist despicable. The reader has a hard time rooting against Smythe, and in fact wants to see him get his revenge.